A woman who is deathly allergic to latex cannot even share a room with a balloon because she could have a dangerous reaction to particles in the air.

Liz Knight has spent most of her life avoiding latex because of its potentially fatal effects, and has to clingfilm everything with rubber buttons so she can touch them.

Allergy-stricken since childhood, Mrs Knight was sensitive to dust, feathers, animal fur and even human hair when she was younger.

She had to have her own hair cut short so it didn’t irritate her skin and was left outside in the car when her family visited an aunt who owned a budgie.

Now 56, she has to adapt every aspect of her life to make sure nothing triggers a reaction or sends her into anaphylactic shock and sometimes feels ‘trapped’ at home.

Liz Knight, from Paignton in Devon, said she is allergic to the buttons on her remote controls so she has to wrap them in clingfilm so they’re still usable

Mrs Knight, from Paignton in Devon, has suffered with irritated skin her whole life.

In her 20s her eczema got infected and led to septicaemia, which left her hospitalised for weeks.

But it wasn’t until the 1990s when she was at a fair with her family, that she suspected a latex allergy.

‘One of my daughters handed me a handful of these great, big, thick helium balloons and asked me if I could hold them while she ran off to do something,’ she told BBC Devon.

‘I must have touched my face after holding them because that’s when this dramatic swelling started.’ 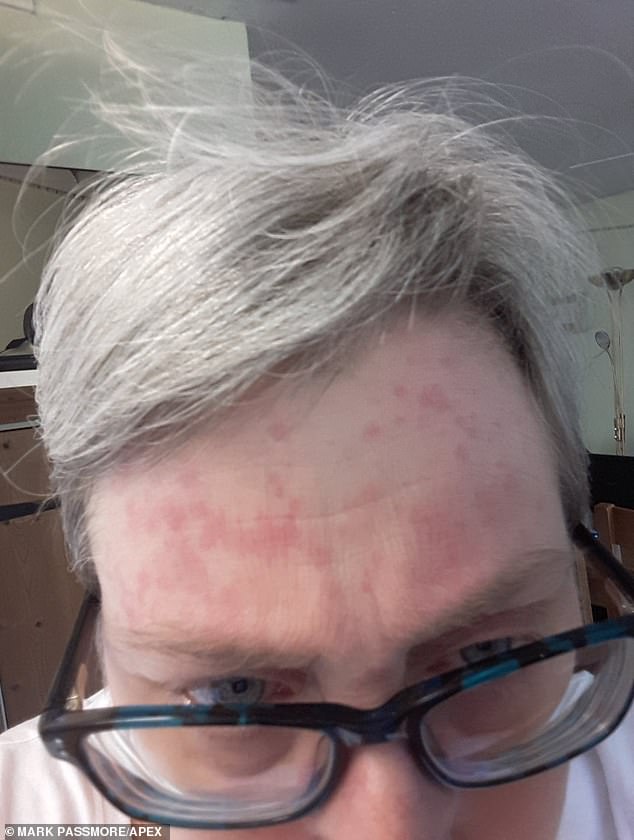 Mrs Knight has suffered with problematic skin for her whole life, and she can now develop allergic symptoms even if she leaves the window open during roadworks or touches newspaper ink, she claims 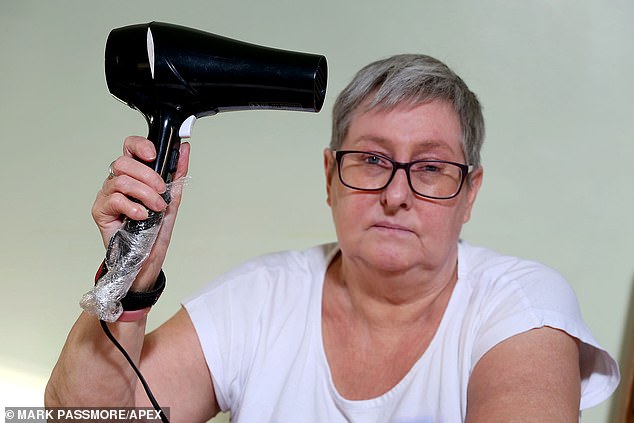 WHAT IS ANAPHYLACTIC SHOCK?

Anaphylaxis, also known as anaphylactic shock, can kill within minutes.

It is a severe and potentially life-threatening reaction to a trigger, such as an allergy.

The reaction can often be triggered by certain foods, including peanuts and shellfish.

However, some medicines, bee stings, and even latex used in condoms can also cause the life-threatening reaction.

According to the NHS, it occurs when the immune system overreacts to a trigger.

It is considered a medical emergency and requires immediate treatment.

Insect stings are not dangerous for most victims but a person does not necessarily have to have a pre-existing condition to be in danger.

An incremental build-up of stings can cause a person to develop an allergy, with a subsequent sting triggering the anaphylactic reaction.

Mrs Knight believes she developed the allergy by repeated exposure to latex from going to the doctors so much, which exposed her already fragile skin to the material.

Her everyday life has been impacted in a multitude of ways.

She can no longer read a newspaper because the ink contains latex.

It is the same with the buttons on remote controls, the handle of her carving knife, her blender, mixer and hairdryer, all of which are covered with cling film so she can still use them.

Whenever there are roadworks nearby, Mrs Knight says she has to keep her doors and windows closed because the road surface contains latex.

‘I often feel trapped,’ she said.

‘Sometimes I stay at home for up to a week, just because it’s safe.’

Then four years ago Mrs Knight got confirmation of what she was dreading – she could react to latex even without touching it.

She had walked into a shop with her husband during the winter and her lips instantly swelled and she broke out in hives.

‘I went straight back outside and said, “I don’t know what’s in there but something’s making me feel really bad”.’

They looked back and saw six balloons tied around a stand at the back of the shop.

In that case, the latex proteins had been circulating through the heating system.

But Mrs Knight’s allergy is so severe that even if a room has had a balloon in it in the past 48 hours – especially if it has popped – she might have a severe reaction because the latex proteins could still be in the air.

Most reactions cause her to start sweating, her lips swell and she has a feeling of ‘impending doom’.

She can normally handle the symptoms by leaving the area, going outside and letting herself recover – although it can take hours to get back to normal.

One recent reaction at her home, however, was more extreme, and left her in serious trouble.

‘A few months ago I made a sweet and sour dish using a sachet that had 2 per cent pineapple juice.

‘Within about 15 minutes of eating it I could feel my tongue swelling and then my throat started going a bit funny. 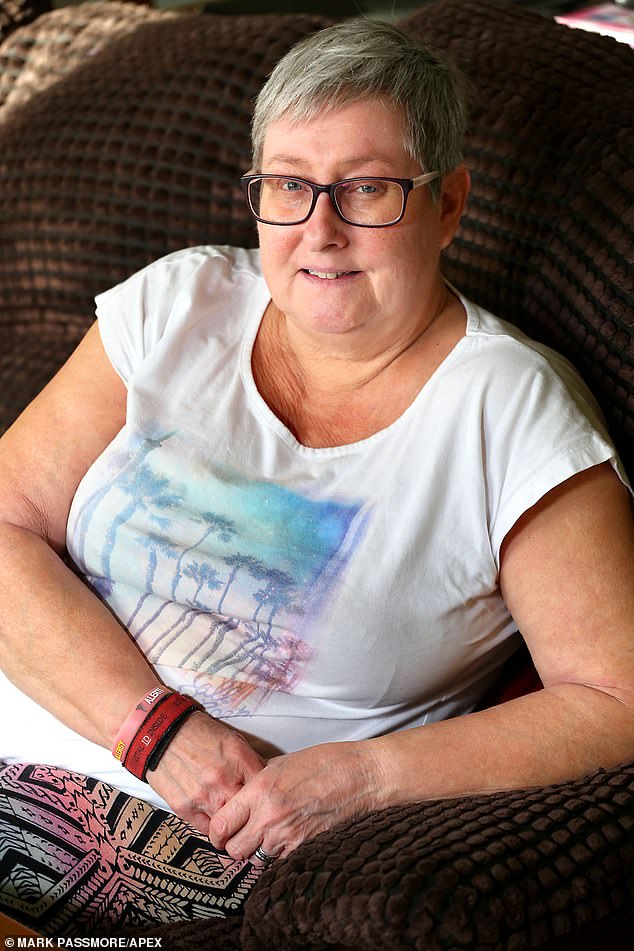 Mrs Knight said: ‘When it feels really unfair I get a bit depressed about it, I suppose, but there’s always that feeling that it could be worse’ 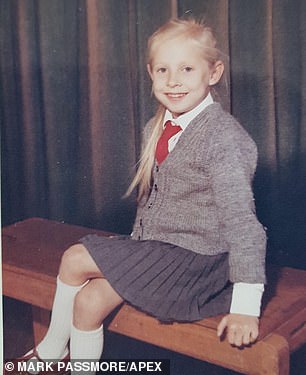 Mrs Knight, pictured as a child, had various allergies when she was younger, including to dust, feathers and animal and human hair

‘My tongue was getting worse and worse.’

Tropical fruits have proteins that are almost identical to the latex protein and often produce a very similar reaction.

She used her Epipen, a self-administered injection of adrenaline which slows the effects of allergic reactions.

‘The paramedics took my blood pressure in the ambulance and it was through the roof.’

Mrs Knight was monitored in hospital for several hours to make sure she didn’t have a delayed reaction.

Her allergies have also had an effect on her mental health.

Her social circle has ‘drastically shrunk’ and she had to quit an exercise group she attended for years because of the latex in mats, trainers and aerosol sprays.

She has also had to give up her work at a pharmacy due to repeated reactions which were endangering her health and now feels guilty that she can’t contribute financially at home.

Despite all of this, Mrs Knight says she’s determined not to let her latex allergy completely take over her life.

‘I can walk, I can do and see things and I’ve got to be grateful for the things I do have.’

She has now found a crochet group near her house where everyone is happy to look out for her.

She is also an ambassador for the allergy awareness group, Globalaai.

Globalaai was formed in 2016 after its founder, Dr Pooja Newman, had an anaphylactic shock at a concert in Melbourne.

A surprise balloon drop left her in intensive care for nearly a week and inspired her to raise awareness of latex allergies around the world.

While recovering, she made a Facebook page to tell her story and the non-profit organisation was founded.

‘Part of the reason for this charity is to recognise the trauma people suffer as a result of an anaphylactic event and the issues around feeling discriminated or not included in everyday life,’ said Dr Newman.

The organisation has developed Epipen stations in public places and has supported the ban of latex gloves in food preparation in several US states, as well as a proposed restriction of balloons in public spaces in Australia.

Mrs Knight’s work with the group has seen progress in Paignton, with many shops changing their practices on her advice.

While recognising the many ways in which her allergies limit her life, Mrs Knight’s outlook remains positive.

‘When it feels really unfair I get a bit depressed about it, I suppose, but there’s always that feeling that it could be worse.

‘I try to talk to as many people as possible about latex allergies. The more people that know about it, the more things can change.

‘I’m determined not to let allergies take away everything in my life and I’ll work to improve things, not just for me but for other people as well.’