A friend recently shared what lockdown life has been like for his family.

His wife is up and at her desk by 4am. He rises at 5am to do an hour of work before getting their two young children up, dressed and fed.

She takes over at 10am so he can go back to his desk, and then he tags back in for the lunch shift. She relieves him around 2.30pm and looks after the children until he finishes his work around 8pm.

Just hearing about it had me reaching for a large glass of red.

Under pressure: Women have provided two thirds more childcare than men during lockdown

Believe it or not, they are the lucky ones. Not everyone can work from home or has a job flexible enough to fit around childcare.

And even if it is, this stressful juggling act often isn’t sustainable for long.

This has forced many parents to reduce their hours and take a pay cut or give up work entirely.

And when I say parents, the statistics say women.

A separate study of almost 20,000 working women, also published last week by campaign group Pregnant Then Screwed, claimed that almost three-­quarters of mothers have had to work fewer hours because of a lack of childcare.

Mothers are also 47 per cent more likely than fathers to have permanently lost or quit their job as a result of the current crisis, according to research by the Institute for Fiscal Studies.

For many women, having a baby can already be an enormous financial blow, hitting their pay, pensions and career progression.

Earning less will also have dire consequences for women’s pensions, which were already significantly smaller than men’s before Covid-19, not to mention their mental health and sense of worth.

Women are already more likely to work in industries hit hardest by the crisis such as retail and hospitality.

Those who have been furloughed or forced to reduce their hours to look after youngsters now fear they will be first in the firing line when it comes to redundancies or being passed over for future promotions.

But with schools and summer camps closed and nurseries unable to open or restricted on numbers, someone has to stay at home with the children.

And with men still more likely to be the main breadwinner, the default is often for the mother to take on this role.

The Government urgently needs to bolster its childcare funding and throw a lifeline to the thousands of nurseries, pre-schools and childminders on the brink of collapse.

Nurseries were struggling before the pandemic because they were not being paid enough to offer 30 free hours of childcare a week to working parents. Employers also need to do their bit by offering families the flexibility they need to continue working.

With no quick fix to the Covid-19 crisis, we cannot afford to regress to a Fifties way of life — or we may find it becomes permanent. 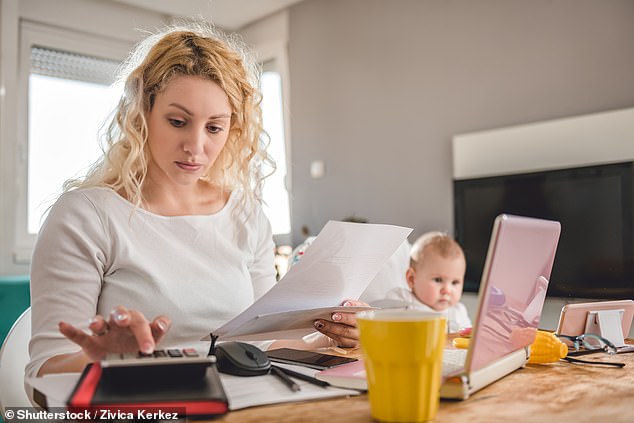 When I was growing up, Mum always paid the milkman with a cheque left in the top of a washed-out bottle on the doorstep.

She was at work when he called at the house to take payment and this was safer than leaving cash.

Yet the country’s largest home delivery milk company, Milk & More, has told customers that as of this month they can no longer pay by cheque due to ‘potential health issues’. What nonsense.

Surely the milkman could just wear gloves? Presumably he still has to handle empty bottles customers have touched.

And what about customers like Money Mail reader Christine Reeve, aged 80, of Suffolk?

She says: ‘I pay my paper bill and donate to charities by cheque, and no one else says it is a health hazard. I do not do online banking, and don’t like direct debits.’

Stick with shares for the long run as it pays to...