This is where Owen Farrell was minted. A wintery, slate-grey sky above, a couple of rugby fields in front, the Leeds-Liverpool canal over there, the cobbled streets and terraced houses of one of the most deprived neighbourhoods in Britain behind us, here is Wigan St Patricks Amateur Rugby League Club.

The clubhouse was built by the hands of the devoted — members who were electricians, bricklayers and decorators — in a part of a working-class town where two religions conjoin, the Roman Catholic faith that reflects an Irish heritage and a 13-man game called rugby league.

In this humbling place, as far away as it is possible to imagine from the tweedy, Hooray Henry world of Twickenham — HQ, if you please — Farrell sharpened his ball skills as a prodigiously talented boy. On Saturday in Dublin, 27-year-old Owen will lead England against an Ireland team whose defence coach is his father Andy, a legend up here. 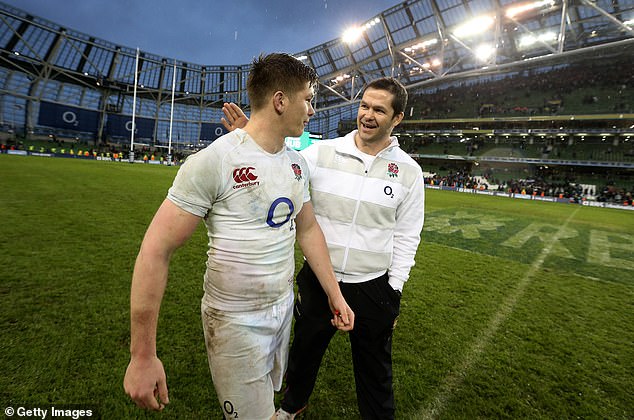 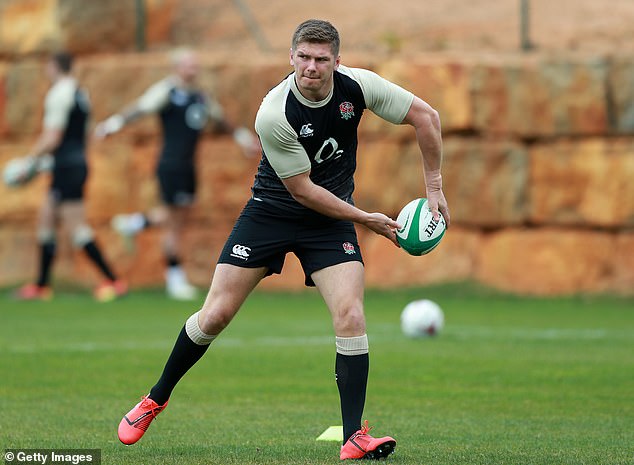 Fly-half Owen will be one of the keys to England’s success, pulling the strings in the back line 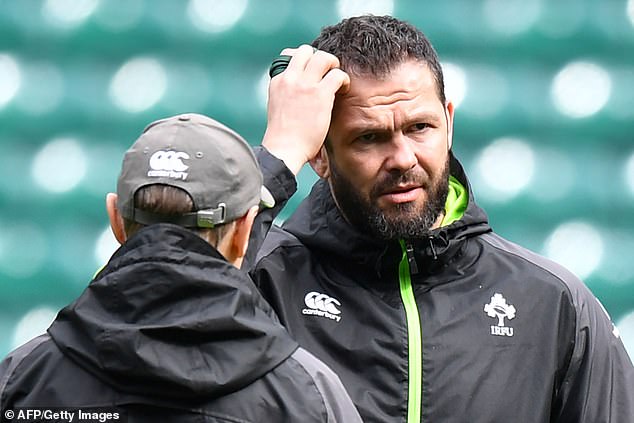 Andy, meanwhile, is Ireland’s defence coach and will take over as boss after the World Cup

Father Andy during his Wigan days with son Owen in 1996

Farrell Snr, 43, is a Wigan Warriors great, a goal-kicking loose forward and inspirational captain who won six championships and four Challenge Cups for his hometown club before switching codes to play for Saracens and claim eight caps for England.

He has since forged a commanding reputation as a coach, first with Saracens and then Munster, England, the Lions and now Ireland, where he will take over from Joe Schmidt as head coach following this year’s World Cup.

Andy’s move south in 2005 was met with serious resistance in one quarter: Owen’s. ‘We had to drag him with us, kicking and screaming,’ his dad says of the then 13-year-old, whose entire life had centred on league.

Owen had drop-kicked the ball before he was two, breathing in the game — and a culture — at Wigan’s Central Park. During school holidays he watched his father train and helped collect the balls afterwards. They were known as ‘Big Faz’ and ‘Little Faz’.

Down in the corridor is their own ‘wall of fame’. Forty-four faces beam back at the current pupils as they scurry from lesson to lesson. Forty-two of the pin-ups are alumni who graduated to top-echelon rugby, mostly league, some union. Owen Farrell, Shaun Edwards, Mike Gregory, Chris Ashton, Sam Tomkins, Joel Tomkins and Sean O’Loughlin, the Warriors captain who is Owen’s uncle (his mother Colleen’s brother). A cousin, Liam Farrell, is also up on the wall.

The other two faces belong to netball international Karen Atkinson and Everton footballer Beni Baningime. And at the end of the display — by way of inspiration — is a giant question mark. Who will be the next face on the wall?

The Beech Hill housing estate and its deprivations are nearby, but standards at St John Fisher are non-negotiable — girls must tie their hair back, black blazers with the school logo are worn, and no means no. 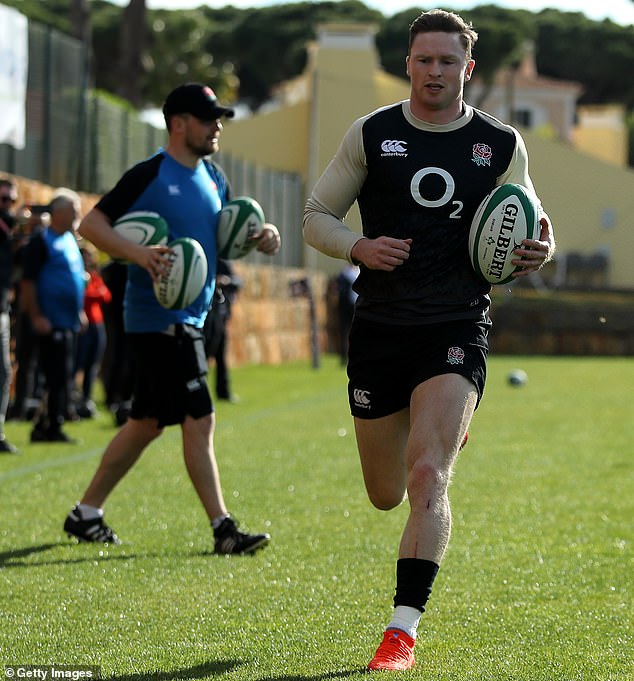 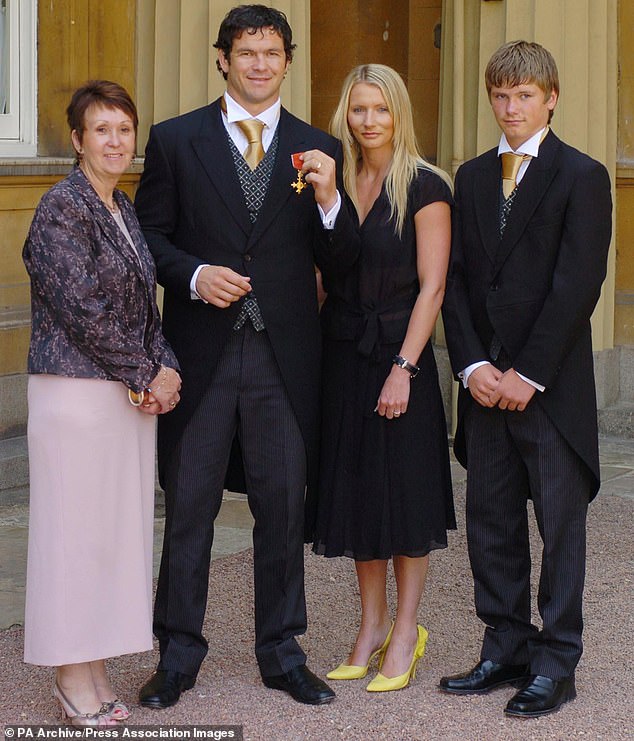 Andy collects his OBE as he is joined by (L-R) his mum Carol, wife Colleen and son Owen 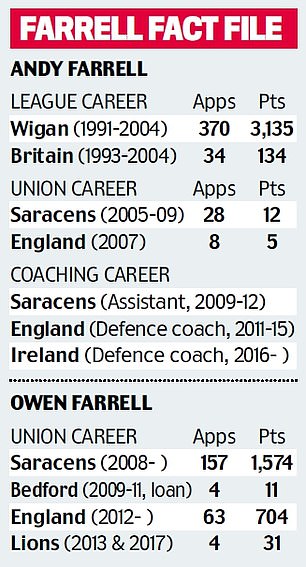 ‘The wall of fame is at the heart of the ethos of the school,’ says head teacher Alison Rigby. ‘Rugby acts as an inspiration. And we are determined to show that coming from a socially deprived area does not mean you have to live on drugs and alcohol. The school encourages high achievement.’

Andy won his first Challenge Cup aged only 17, having just fathered Owen, and played internationally a year later. But whoever you ask here in Wigan, you will be told how grounded he remained despite the sudden stardom.

Steve McCormack is a boyhood friend of Andy’s — he lived at No 16 Freshfield Road in the Goose Green area of town, three doors away from the Farrells at No 22.

‘We were born and brought up together in a close neighbourhood,’ says McCormack. ‘We all looked out for each other.

‘It was full of good, hard-working people. We would play out on the street. Just sport, sport, sport. From a young age Andy (one of four children) just wanted to win.

‘He’ll be very proud of Owen. They are both very driven but close and proud of each other. But around the time of the game there will be no love.’ 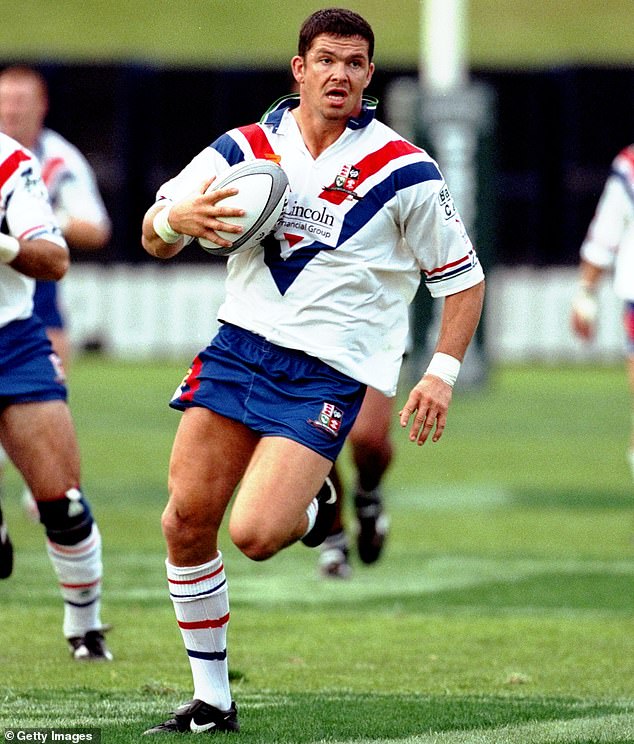 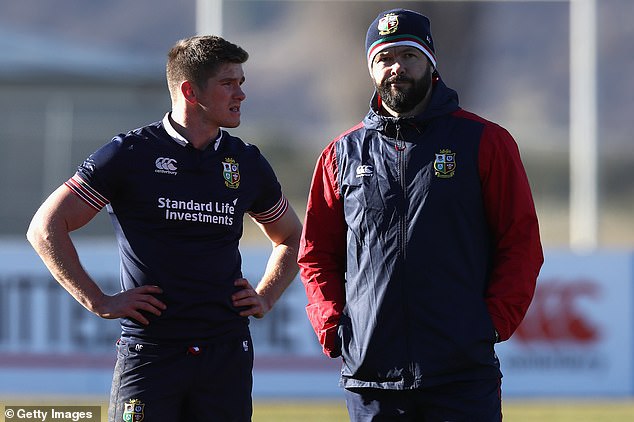 Andy still returns periodically to catch up for a beer at the local Freemasons Arms with old pals like McCormack, now head of welfare at Wigan Warriors.

Most things in this town of 103,000 seem to lead to or from rugby league. Andy’s father Peter is head of talent identification at Warrington Wolves. Owen’s grandfather Kieron O’Loughlin, and Kieron’s brother Kevin, played for Wigan. And so it goes on.

Dave Mallin is chairman of governors at St John Fisher and a former teacher there and at nearby Sacred Heart Primary. He has seen them all in more than 50 years’ involvement with Wigan schools rugby.

‘Owen was a model pupil,’ he says. ‘He comes from a very sensible, strong family. Both Andy and Owen could dominate a game from a young age. Owen was the more skilful player as a boy.

‘We could easily have played him in our Under 11 side when he was two or three years younger. By the time he was 11, he was a boy with the brain of a 16-year-old rugby player.

‘He could see things his team-mates couldn’t. He was light-years ahead. I have never seen a player read the game so naturally at such a young age.’

It was Mallin who wrote Owen’s reference for his new school — St George’s, Harpenden — when the Farrells went down south.

‘I don’t want to go there,’ Mallin remembers Owen telling him. ‘I want to stop in Wigan.’ 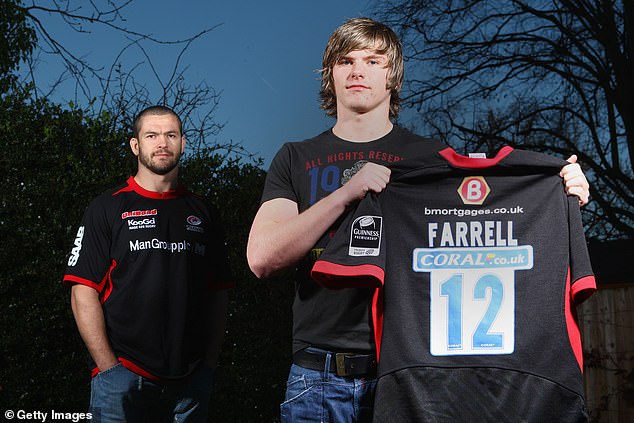 Owen revisited his old haunts several times soon after the move, hankering after his former life in league territory. Over at St Pats they have a local newspaper cutting telling how ‘Owen Farrell, son of Wigan great Andy, returned from his London home to play a key role for Pats’ in winning the U16 National Cup final.

Their victory song, (Is This the Way to) Amarillo, would belt out from the changing rooms that produced England captains of both codes on the same day — June 23, 2018, when Owen led the union boys to victory against South Africa and uncle Sean captained his league team triumphantly against New Zealand. Surely no other club can make such a claim.

Joe Charnock, a St Pats stalwart, remembers that Andy would spend Sundays watching his son, ‘like any parent. He would stand on the touchline and have a hot dog. They are a lovely family. Down to earth and full of common sense’.

He also tells how the coaches were slack-jawed in astonishment at Owen’s team talks, being so detailed and perceptive that they could hardly believe the words were coming out of a boy’s mouth.

Since relocating, Andy has teased Owen — who found his feet in the 15-man game at Harpenden Rugby Club, where a life-size picture of him hangs outside the loos — about his ‘dead posh accent’.

Tongue in cheek, he says Owen is, ‘definitely not a Wigan boy any more’. In fact, despite his four Premiership titles and European glory with Saracens and two Six Nations titles with England, Owen is still close to his roots — and his vowels remain defiantly flat. 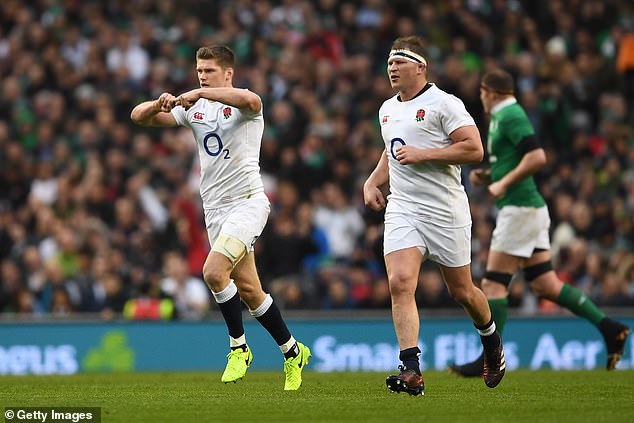 For the last few years, Owen’s try celebration has involved twisting two fingers to form the initials ‘JJ’ — for 11-year-old Jack Johnson, the terminally ill son of family friends. Jack, whose father Andy Johnson is a former team-mate of Andy’s at Wigan, suffers from Duchenne muscular dystrophy, a muscle-wasting disease.

Andy and his wife Alex have formed an appeal called Joining Jack to fund medical research. They have raised £2million so far.

Owen also helps with events and spends time with Jack.

And, as if to nail his dad’s accusations of any southern softening, what did Owen serve at his recent wedding? A tray of Wigan pies.

Back to Saturday’s clash. The Farrells have always put their relationship to one side when Andy coached Owen at Saracens, England and the Lions, and they still do when pitted against each other for their countries.

But spare a thought for Colleen, wife and mother. ‘She’s the one I feel sorry for,’ says McCormack, Andy’s old neighbour.

And when the game is all over? Well, when Owen was in Ireland on Saracens duties last spring, beating Munster, father and son were applauded by rugby folk as they walked into Mulligan’s, a smart pub in the Sandymount area of Dublin, where Andy is based.

It would be nice to think, whatever the result, of Andy and Owen raising a glass together again on Saturday night, two stars, made in Wigan.

Dramatic $17,000 Bitcoin Peak Possible Within Weeks Based on Halving Fracal