The number of people with cancer in the UK has soared by 20 per cent in the last five years.

By 2020 there will be an estimated three million patients – about as many people as live in Birmingham, Manchester, Bristol, Glasgow and Cardiff combined.

Macmillan Cancer Support revealed the shocking statistics and said NHS staff shortages are creating a ‘perfect storm’ for the country.

People living longer means more are surviving to develop cancer in old age, and even surviving when they already have the disease, sending patients rates rocketing.

Political parties are being urged to commit to spending more money on cancer nurses and treatments to try and bring lengthy waiting times down.

Sarah Mills, 36, was diagnosed with bowel cancer last year and said she lives in ‘a state of permanent stress’ because the NHS doesn’t have enough staff or money to give her all the help she needs

Macmillan’s analysis found someone is diagnosed with cancer every 90 seconds, on average, and 35,000 people will be told between now and the election on December 12.

‘More and more people are hearing the life-changing news that they have cancer, at a time when the NHS desperately needs additional doctors and nurses,’ said the charity’s chief executive, Lynda Thomas.

‘Ultimately, this is whipping up a perfect storm which needs to be taken seriously as a day-one priority by party leaders.

‘I constantly hear heart-breaking stories from patients who are so grateful for their healthcare professionals but often don’t want to add to their workload with their needs or concerns.

‘We need decision makers across the UK to prioritise funding and put in place the right plans, to ensure we have a cancer workforce fit for purpose both now and in the future.’

By next year an estimated 1.6million women and 1.3m men will be living with cancer.

Breast and prostate cancer are the most common forms of the disease and affect a combined 1.3million people (800,000 breast; 500,000 prostate).

A further 340,000 people have bowel cancer and another 90,000 have lung cancer, which is one of the most deadly types.

NHS statistics show that the health service is missing around 44,000 nurses and its staff shortages are having an impact on patient care.

Survival rates for some cancers – namely bladder cancer – even seem to be getting worse in the UK.

‘HOW CAN NURSES GIVE THE SERVICE THEY WANT TO IN THESE CIRCUMSTANCES?’

Daloni Carlisle, 55, from Kent, was diagnosed with womb cancer in 2014 which is now treatable but not curable.

She said: ‘I’ve been through it all – chemotherapy, radiotherapy, a hysterectomy. So many hospital appointments, so many fantastic staff but also far too many times just hanging around, anxiously waiting for appointments for up to two hours.

‘It’s stressful and physically difficult when you’re living with the side effects of treatment and the disease itself. 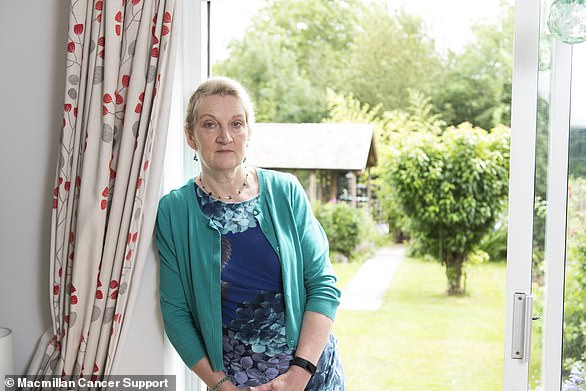 Daloni Carlisle, from Kent, was diagnosed with womb cancer in 2014 – her disease can be treated to keep it under control but never cured

‘It must be equally difficult for the staff who end up apologising to sometimes angry and frustrated patients for delays that aren’t their fault.

‘How can they possibly give the service they want to in these circumstances?

‘Sometimes I wonder how they keep smiling – and believe me, despite it all, they do.’

Sarah Mills, 36, from London, was diagnosed with colorectal cancer in 2018.

She said: ‘I have survived cancer, and yet I still live in a state of permanent stress while I navigate a system that is not resourced enough to help me.

‘That is not the fault of my nurses – I have witnessed every nurse I’ve ever encountered doing unpaid overtime. But it is psychologically damaging.

‘My worry is that cancer patients could be made more ill by the stress of being left without answers to important questions.’

Worshippers use knives to pop their own eyes out in Indian...

One of Britain’s longest surviving transplant patients speaks out