By Chris Foy for the Daily Mail

England’s autumn preparations were undermined by a double injury setback last night as Courtney Lawes and Manu Tuilagi were helped off during Sale’s emphatic victory at Franklin’s Gardens.

National coach Eddie Jones is due to name an initial training squad on Monday ahead of a busy campaign featuring five Tests, following a non-cap encounter with the Barbarians. That fixture at Twickenham on October 25 will be England’s first outing since beating Wales at home back in March.

Lawes and Tuilagi were both in the Red Rose starting XV on that occasion – as they were for last year’s World Cup Final. However, their involvement in the rescheduled international matches which are fast approaching has now been plunged into doubt. 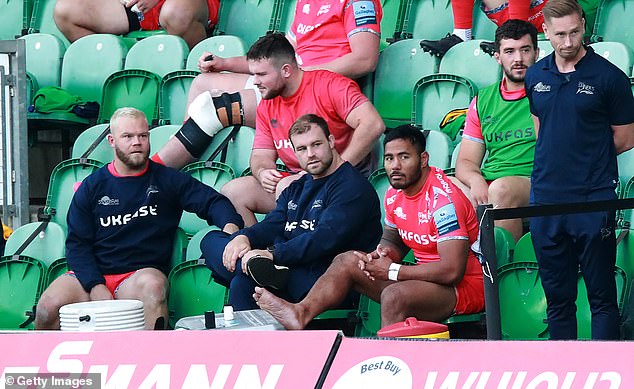 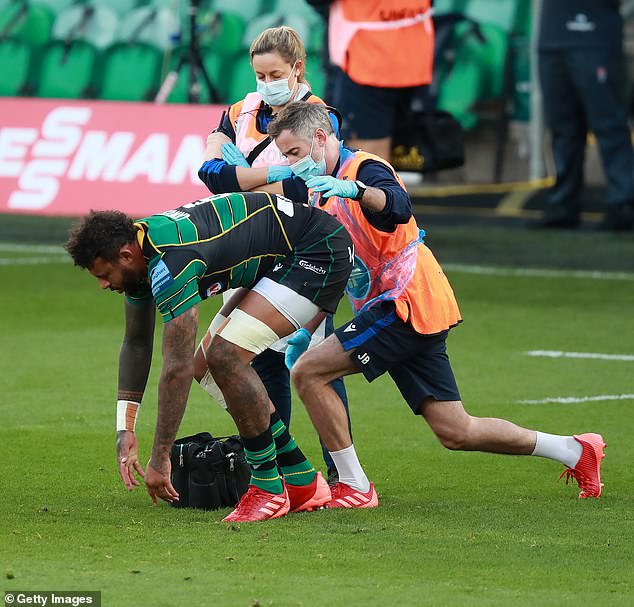 In the eighth minute of this Premiership contest, Lawes jumped for a high kick and collided with Sale lock Cobus Wiese. He fell awkwardly – appearing to catch his studs in the turf and twist his right leg back at a painful angle. The 31-year-old stayed down, holding his right ankle. He was treated, before limping off, aided by Saints’ medical staff.

Chris Boyd, Northampton’s director of rugby, said: ‘Courtney has an ankle injury and it looks pretty ginger. I wouldn’t be overly hopeful of a fast return – he sustained a fairly heavy blow on the ankle. He will go off tomorrow to get a scan. It is unfortunate for Courtney and maybe, in the short-term, unfortunate for England.’

Moments after Lawes’ early exit, there was more bad news for Jones and a worrying sight for title-chasing Sale, as Tuilagi carried into contact and lay on the pitch in obvious pain. The centre was forced to withdraw and Steve Diamond’s said: ‘It looks like it’s his Achilles. It doesn’t look good, but we won’t know until tomorrow. I don’t think he will be in contention for the weekend. I don’t think it’s too clever. I don’t think it’s the best.’ 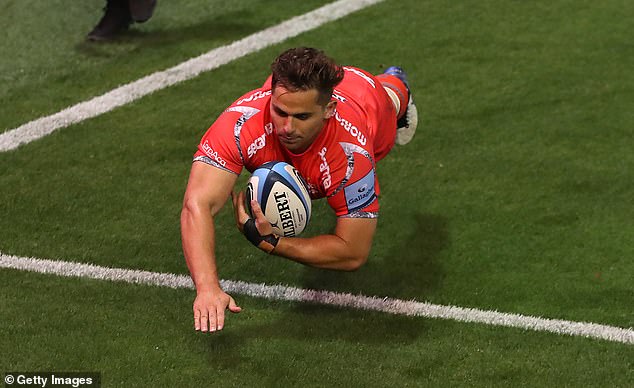 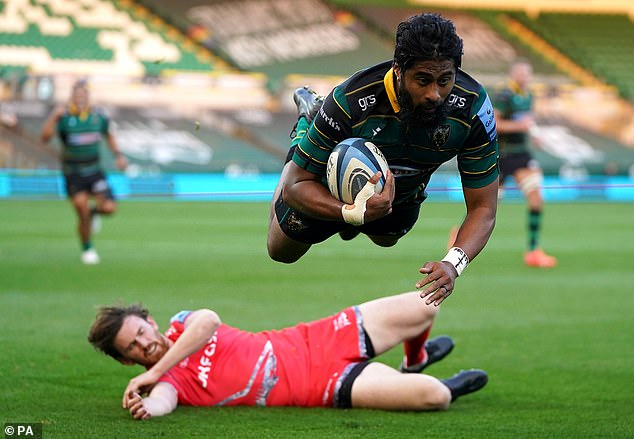 Tuilagi was plagued by a multitude of injuries over several years – savagely curtailing his game-time for club and country. Lately, his fortunes have improved but this is an alarming development. The Sharks will be braced for the loss of their big-name summer signing for the play-offs and Jones may have to hurriedly alter his midfield plans.

His intention is to send out strong England teams for the Six Nations finale against Italy in Rome on October 31 and the Autumn Nations Cup, featuring pool games against Georgia, Ireland and Wales, before a finals-day fixture. Lawes and Tuilagi would have been leading contenders for starting roles.

If they are absent, Jones will surely consider Joe Launchbury as second row partner for Maro Itoje, while either Henry Slade or Jonathan Joseph could be picked at outside centre, alongside the 10-12 axis of George Ford and Owen Farrell. 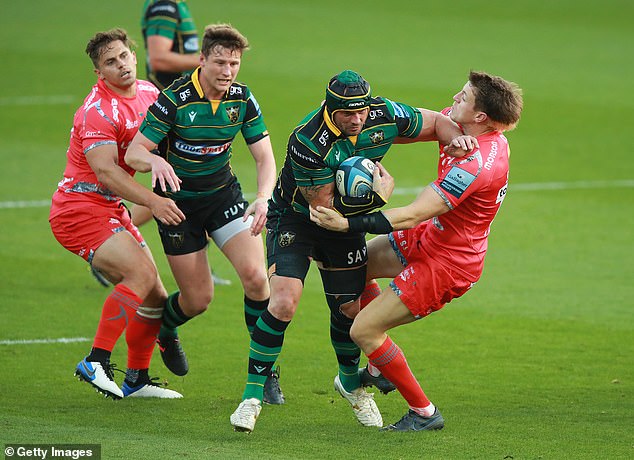 With Wales fly-half Dan Biggar also hobbling out of this match, the physical toll over-shadowed a significant result. Sale’s bonus-point win was built on two more tries for their outstanding, prolific full-back, Luke James, who is displaying the sort of consistent form worthy of an England call-up.

The visitors also claimed a penalty try while Simon Hammersley, Valery Morozov and Rohan Janse van Rensburg touched down in a powerful display.

Sale face Worcester at the AJ Bell Stadium on Sunday knowing that a play-off place is there for the taking, after subjecting freefalling Northampton to a record seventh successive home defeat.