The use of robots in the workplace has more than doubled in just 12 years, studies have found.

Now a new interactive map provides more detail into this ‘robot exposure’ by highlighting the top 10 metropolitan areas threatened by this machine takeover – California being listed as number one.

In addition to areas most at risk, experts found that automation is displacing younger, less-educated and minority workers at the highest rates.

The study and map were developed by The Century Foundation, a progressive think tank headquartered in New York City, which looked across more than 250 metropolitan areas to understand this ‘robot intensity’.

Los Angeles, Long Beach and Santa Ana, California were ranked number one, followed by Chicago, Naperville and Joliet in Illinois.

Dockworkers in Los Angeles have been recently replaced by unmanned electric vehicles to transport shipping containers around the largest port terminal in the US – it was once done by humans in diesel trucks.

And many manufacturers in Chicago are adopting machine help over human workers.

Coming in at number three is Houston, Baytown and Sugar Land, Texas, then Phoenix, Mesa, Scottsdale in Arizona.

At number five is Detroit, Warren and Dearborn, Michigan and then parts of Wisconsin (Milwaukee, Waukesha and West Allis) came in at number six.

Areas of California again make the list at number eight and Indianapolis, Indiana was listed at number nine.

In addition to areas most at risk, experts found that automation is displacing younger, less-educated and minority workers at the highest rates 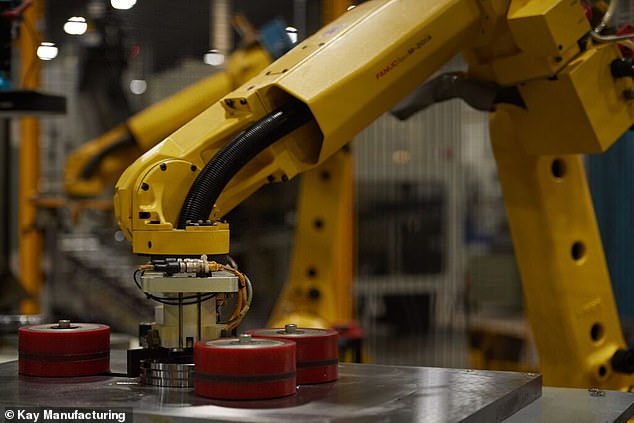 Outside of the busy city locations, the reported found that the manufacturing industry in the Midwest is being threatened the most by robot workers

And the tenth metropolis area affected by a robot takeover is Cleveland and Elyria, Ohio.

‘We are not the first to examine the impact of robots on labor market outcomes,’ the authors of the report share.

‘The first generation of studies estimate the ‘risk’ or chance that automation displaces workers.’

‘Several studies predict that, over the next two decades, 45 percent to 57 percent of U.S. and OECD workers will be at risk of losing their jobs to automation.’

The report also identify who is at risk – minorities and youth that do not have an education higher than high school.

‘Our youth samples are for respondents 16 to 24 years of age,’ the experts wrote.

‘They are African American, Latinx, and white men and women who have completed no more than twelve years of schooling or received no more than a high school diploma or GED.’

‘Adult respondents are 25-to-64-year-old African American, Latinx, and white men and women. They, too, have completed not more than a high school degree.’ The use of robots in the workplace has more than double in just a 12 year period, displacing 50 percent of many human workers across the US, studies have found

Outside of the busy city locations, the reported found that the manufacturing industry in the Midwest is being threatened the most by robot workers.

William Rodgers, a professor of public policy at Edward J. Bloustein School and chief economist at the Heldrich Center for Workforce Development and coauthor of the report, said: ‘There have been clear losers with increased automation—namely, younger, less-educated manufacturing workers in the Midwest and younger, minority workers in these industries in particular.’

‘These industries not only have the highest number of robots in use, but are also experiencing the fastest growth in robot adoption.’

Rodgers said some of the adverse impacts on the wages and jobs of Midwest manufacturing workers have been masked by the economic recovery of the past decade.

Absent such a strong recovery, robots would have displaced many more jobs than they did.

Fed Chairman Powell’s Approach to Regulation Has Drawn Criticism From Some...

Mystery of ‘Green Children’ from ‘twilight zone’ who baffled villagers with...

Watch out for these clever tax scams