There was a fun game we played in the This is Money office for a while.

Think of the card game higher or lower, but instead guess whether a product, date or pop culture touchstone is older than yours truly.

I was lucky that my parents and grandparents were playing with stocks while I was playing with blocks, but you don’t need to save for 18 years in order to get into investing

And yet, despite the best efforts of the supposed red-flag flying Bolshie inside of me, I am an investor.

And I’m here to explain why you should be too.

A couple of things last week spurred this line of thinking. First was trying to answer one of the more unusual reader questions I’ve received in my time at This is Money: ‘I’m a 16-year-old and want to go into investing, how do I do it’?

Second was being sent some data from the taxman that showed just 1.2 per cent of new stocks and shares Isas opened in the 2015 – 2016 tax year, the most recent year HMRC has records for, were done so by people aged under 25.

Both things drove me last weekend to dive into the filing cabinet in search of the paper trail of my own investing history. 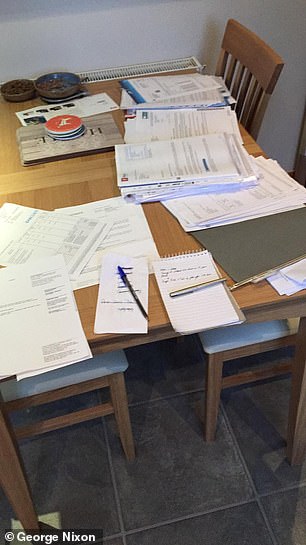 Paper trail: A reader’s email sent me back in time to April 2015 in search of the origins of my investments, not that I remembered them

It turns out that I’m one of those 1.2 per cent, not that I really deserve any credit for it.

I was lucky to have prescient parents and grandparents who opened for me what was known as the Invesco Rupert Fund, a long-term savings fund for children, just after I was born, and paid into that for 18 years.

According to the paperwork, that was closed on 2 April 2015.

My financial knowledge at the time was a Rumsfeldian unknown unknown, I had no idea how little I knew, especially about investing.

Luckily my dad, an accountant, had the financial nous and the foresight – and opened a stocks and shares Isa for me and the money from the Rupert Fund was transferred into it.

It was in my name, and I was ferrying around and verifying and signing paperwork and forms, but I sure as anything didn’t know what it meant.

Looking back, I did find the old contract notes from the end of July 2015, showing the money deposited was split in thirds and put into three separate funds.

Not all those worked out of course, but even adjusting for more money being invested since I’ve started working and some lean times along the way – like a big fall in the stock market at the end of 2018 – I worked out the return I’ve had in percentage terms in the nearly four years since it being opened beat any return I would have got from putting the money in cash savings.

1. Swot up: One of the real ground rules of investing is never put money into something you don’t understand.

There are bucketloads of guides on everything from how to get started, to the individual funds you can invest in and their track records, and even what might be the best strategy for your life circumstances.

2. Diversify: Jason Hollands of Tilney stresses an important principle in the world of investments is diversification, or ‘not having all your eggs in one basket’, but ‘spreading your cash across a wide number of investments and also markets and economies’.

Because this is hard for an individual investor to achieve, this is where funds are key. In funds your cash is lumped together with that of other investors to purchase a portfolio of many different stocks and shares.

3. Think long-term: This one bears repeating because it’s so key. Because of the fluctuations that happen in markets, if you plan on needing the money in less than five years, you are almost certainly better off putting that money in cash savings. Investing for a longer time-frame than this gives you time for your investments to recover from any setbacks.

And that’s one of the key points I want to ram home.

It’s become a real cliché to read about how much you could be losing out by leaving spare money in cash rather than by investing it, but to see it borne out in practice with your own eyes does make you realise there’s a truth to it.

If you’re trying to save for the long-term, for example for a house or some other considerable expense, it does make sense.

There will be ups and downs along the way, but the chances are it will be worth it.

But make sure it is for the long-term.

As Jason Hollands, managing director of Tilney Investment Management, told me: ‘I would suggest investing with a view of at least five years.

‘”Investing” for a short period of weeks or months, is not investing at all: it is trading and very few people are successful at it.’

The other point is about getting into it and dipping your toe in in the first place.

You don’t need to have saved up for 18 years or even for eight, as that 16-year-old reader has proven you can start investing with a very small amount each month.

They have saved £2,500 from work so far and reckon they can salt away between £50 and £100 a month. Interestingly, it’s less bumper gains than experience that they say they are searching for.

In fact, if you’re nervous about investing it might even be the best way to start is in the shallow end.

While there might be a dizzying range of funds and stocks to pick, so-called ‘robo advisor’ platforms like Moneybox or Wealthify will pick ready-made portfolios for you.

This can be a really easy way to get started and in the case of Moneybox – which rounds up spare change from any payments you make online and invests it – you might not even realise you’ve opened a stocks and shares Isa.

Meanwhile, if you do fancy picking funds for yourself there is a wealth of advice out there to help you get started.

This is Money, our sister newspaper finance sections (and our rivals) are littered with commentary, and many directly respond to the situations of readers with advice that might prove relevant to your own circumstances.

Four years on from not even realising I was an investor, I now feel comfortable enough to make decisions on individual funds.

That statement is less an exercise in blowing my own trumpet and more an encouragement to potential waverers to ‘come on in, the water’s fine’, and that it likely wouldn’t even have taken that long if I’d bothered thinking about it before.

I’m sure the word investing can be off-putting.

To me it conjures images of high-risk poker players and braggadocious Sherman McCoys, or pinstriped suit-wearing old city slickers.

Either way surely it’s a world removed from anything relevant to me?

Instead, think of it as a way of improving the chances of getting a decent return on your hard-earned savings over the long-term. And the younger you are, the more time you have for that money to grow.

Commenting on the idea of starting investing at 16, Holly Mackay, founder of investment advice site Boring Money, said last week: ‘If you can save £50 a month from the age of 16 and keep it up, you’ll be in super strong position by the time you hit your 30s. Investment compounding is powerful and a bit like building a snowman.

‘At first you start rolling and it feels like you’re working hard and that ball isn’t getting much bigger. But the bigger it gets the faster it grows. And then it “snowballs”.’

Taking into account an average return of five per cent over those 14 years, you would have earned £3,780.46 in interest – adding just over 45 per cent to the value of your deposit.

No wonder compound interest is often described as the eight wonder of the world, even if Einstein probably didn’t say it.

While I was lucky enough that my parents had a plan, it took me too long – nearly four years – before I really began to care myself, as the case of the 16-year-old aspiring investor brought home.

That’s why I’m saying why you should care too. And take it from me that four years is a long-time; after all, it’s the age gap between me and Jurassic Park.

How to start investing or be a smarter investor

Investing has proven to be the best way to beat inflation and grow your wealth over the long-term, but how do you get started?

And if you do already invest but feel you’ve lost track of your goals or ended up with a jumble of investments, how can you improve things?

In this podcast, Simon Lambert and Georgie Frost dive into how to be a smarter investor.

They bust the jargon and look at why people should invest, how to get started, what investments you can choose and how to find the right ones for you.

Household bills to increase for millions: How to beat the rises