What’s inside a Martian meteorite: X-ray study on rare fragment could reveal new clues on the red planet’s watery past

Army researchers are using X-Rays to get a look inside some of the world’s most precious artifacts from space, including one of the Earth’s oldest Martian meteorites dubbed, ‘Black Beauty.’

According to the Army Research Laboratory, Black Beauty – a 2 billion-year-old meteorite that scientists say was blasted to Earth from Mars by a large impact event – is among the space specimens to be examined in a joint program with NASA.

‘Black Beauty’, pictured above, is a 2 billion-year-old meteorite that scientists say was blasted to Earth from Mars by a large impact event

‘NASA can ultimately use some of this information to further their understanding for their next mission to Mars,’ said Dr. Jennifer Sietins, an Army materials engineer.

‘What’s unique about Black Beauty is that it’s one of the oldest Martian meteorites that has been discovered on Earth and it’s been proven to have some evidence of water.

‘That’s what makes it so special.’

The collaboration between NASA and the Army’s research laboratory was born out of project that analyzed moon samples from NASA’s Apollo 16 mission and employs technology that is already being used to analyze the micro-structure of different materials.

NASA says the project has already yielded crucial information and upended previous understanding of the way some materials work. 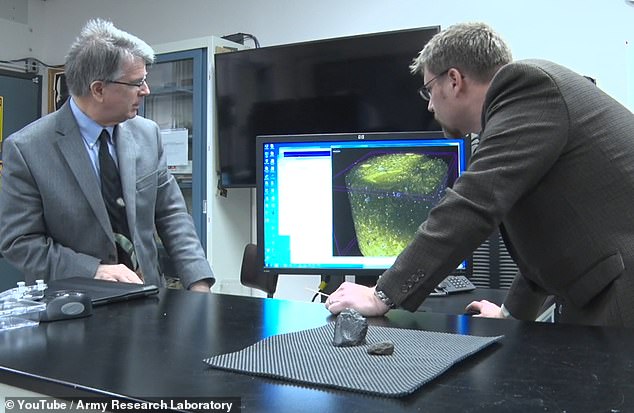 Joint program between NASA and the U.S. Army is taking a closer look into some of the world’s rarest space specimens

‘This partnership we’ve been developing—this collaboration with the Army Research Lab in these new measurements of new things—has been extraordinary,’ said Dr. James Garvin, chief scientist at the NASA Goddard Space Flight Center.

‘We’ve already discovered things that were against what was thought with the existing.

‘Space is a big place and there’s a lot of work to be done.’

According to the International Meteorical Society, of the 61,000 meteors found on Earth, only 224 of them have been identified as coming from Mars, making them among the most rare specimens.

The two parties say they plan on publishing two journal articles later this year about their discoveries analyzing both lunar and martian rocks.

‘We are all discoverers and that is what we have been doing with the U.S. Army,’ Garvin said. ‘The meteorites have an amazing story to tell.’

WHAT ARE NASA’S PLANS FOR A MANNED MISSION TO MARS IN THE 2030s?

Mars has become the next giant leap for mankind’s exploration of space.

But before humans get to the red planet, astronauts will take a series of small steps by returning to the moon for a year-long mission.

Details of a the mission in lunar orbit have been unveiled as part of a timeline of events leading to missions to Mars in the 2030s.

Nasa has outlined its four stage plan (pictured) which it hopes will one day allow humans to visit Mars at he Humans to Mars Summit held in Washington DC yesterday. This will entail multiple missions to the moon over coming decades

In May 2017, Greg Williams, deputy associate administrator for policy and plans at Nasa, outlined the space agency’s four stage plan that it hopes will one day allow humans to visit Mars, as well as its expected time-frame.

Phase one and two will involve multiple trips to lunar space, to allow for construction of a habitat which will provide a staging area for the journey.

The last piece of delivered hardware would be the actual Deep Space Transport vehicle that would later be used to carry a crew to Mars.

And a year-long simulation of life on Mars will be conducted in 2027.

Phase three and and four will begin after 2030 and will involve sustained crew expeditions to the Martian system and surface of Mars.