The fastest ant in the world can run 108 times the length of its own body every second.

Named the Saharan silver, after the desert in which it lives it runs at a pace that, in human terms, would be equivalent to running at 360mph.

The tiny creature runs faster in proportion to its own body than a cheetah and manages about 12 strides for every one that Jamaican sprinter Usain Bolt does in a second.

The Saharan silver’s muscle contraction speed may be ‘close to physiological limits’, they say.

It reaches a record speed of 33.7 inches (855 millimetres) a second by swinging its six tiny legs incredibly quickly.

This enables it to take up to 50 strides a second. To put this in perspective, Usain Bolt manages four.

What’s more it does it in the hottest place on Earth – where the sun rules mercilessly.

The vast wilderness, as big as the United States, is the toughest part of Africa.

They venture from their nests to scavenge the corpses of dead animals at the peak of the day – when the sand can reach 60°C (140F).

The silver hairs on their back act as the ultimate sunshade – reflecting the rays and repelling the heat back towards the sky.

Lead author Professor Harald Wolf, an arthropod expert at the University of Ulm, said: ‘Even among desert ants, the silver ants are special.’

But little was known about how they scamper at such blistering speeds across the sand.

So Prof Wolf and colleagues captured the enigmatic desert dwellers on camera after finding them thriving in the dunes during a visit to the salt pans of Tunisia.

Locating the inconspicuous nests was far from easy. Explained lab member Dr Sarah Pfeffer: ‘We had to look for digging ants or follow a foraging ant back home.’

But once the researchers had located a nest, it was simply a matter of connecting an aluminium channel to the entrance – and placing a feeder at the end to lure them out.

Dr Pfeffer said: ‘After the ants have found the food – they love mealworms – they shuttle back and forth in the channel and we mounted our camera to film them from the top.’

The researchers also excavated a nest, returning with it to record the insects running more slowly at cooler temperatures. 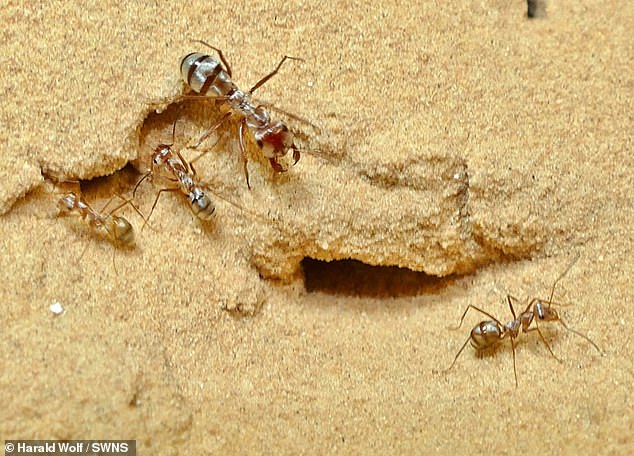 Interestingly, they only managed a more sedate 57 millimetres a second at 10°C in the lab – as it was not the temperature they were used to.

In contrast, their larger cousin known as Cataglyphis fortis, which also lives in the Sahara, only gets up to 620 millimetres a second – or 50 body lengths.

It also places it close to the top of the list of world record breaking creatures – alongside the Australian tiger beetle’s and California coastal mite’s 171 and 377 body lengths a second, respectively.

The study published in the Journal of Experimental Biology also compared the leg length of the Sahara silver and Cataglyphis fortis – and found the former is truly extraordinary.

Its limbs are almost 20 percent shorter. Wondering how it outstrips its bigger relatives, the team then focused on its footwork.

This showed it takes up to 47 strides a second – around a third more than Cataglyphis fortis.

Further analysis found they quadrupled from 4.7 to 20.8mm – as the ant shifts up through the gears.

And instead of simply running it switches to a gallop – with all six feet off the ground at once.

The ant’s coordination was also impressive. It synchronises the movements of the three legs that work together as tripods as it walk.

Each foot only contacted the ground for as little as 7 milliseconds before initiating the next stride.

Added Prof Wolf: ‘These features may be related to the sand dune habitat. They could prevent the animal’s feet from sinking too deeply into the soft sand.’

He now plans to find out more about how they pull off their astounding feats – which he suspects must require muscle contraction speeds close to physiological limits.

Atom Ant was a popular TV cartoon series that thrilled youngsters in the US and the UK.

The indestructible character operated out of an anthill in the countryside, where he had a computer and exercise equipment. He could even fly to Batman style assignments he got from the police.

HOW FAST CAN OTHER ANIMALS RUN IN HUMAN TERMS?

The top speed of an animal vs. what equivalent speed it would feel like to a 5″9 person.

Suspect in Capital One breach threatened to ‘shoot up’ California social...