Kyla Ubbelohde’s brother hurriedly flew to Iowa last year in a desperate attempt to save her life – but she knew that he might undergo the grueling procedure to harvest his bone marrow for nothing.

Diagnosed with an aggressive form of leukemia in 2017, then-26-year-old Kyla’s cancer had come back, chemo had failed, and doctors told her she didn’t have time to wait for a perfect match.

So her brother, Kyle, had agreed to donate his, but it was only 50 percent compatible with Kyla’s, meaning he might have massive needles plunged into his hip bones and spend 20 days recovering – and his sister could still die.

And even under the best of circumstances, using perfectly matched donor marrow, there was always the chance that Kyla could die on the operating table.

Kyla agonized over the decision to put her brother through that pain – and potential guild, if the transplant failed – but ultimately the siblings took the plunge, and Kyla has now been in remission for one year.

at just 26, avid runner and hiker Kyla Ubbelohde was diagnosed with an aggressive form of leukemia in 2017

In a flash, 27-year-old Kyla Ubbelohde’s plans to take a three-day trip with friends were turned on their head in 2017, becoming the beginning of a very different journey – with cancer.

Kyla, who lives in Waterloo, Iowa, was the picture of health with an active lifestyle and the bulk of her life ahead of her. She was just feeling a little under the weather before her trip.

Kyla, then 26, assumed maybe she was coming down with a cold, or at worst was in the earliest stages of the flu, when she went to urgent care ahead of her trip.

But the phlebotomist at the clinic took readings of Kyla’s blood and was perplexed by the strange numbers which were coming up.

Despite repeating the test, the numbers still came back showing the readings of a sick person. Kyla was sent to the hospital, and when nurses took her blood tests there, she was admitted immediately.

Kyla was diagnosed with an aggressive form of acute myeloid leukemia (AML), much to her surprise as she was a healthy 26-year-old woman who worked out regularly and didn’t smoke. She didn’t understand how it could happen to her.

‘I didn’t really feel anything; I didn’t understand the severity of the situation. I was a healthy, young, fit, 26-year-old who didn’t smoke and drank casually – people like me didn’t get cancer,’ Kyla said.

She had none of the risk factors for AML, like being male, being over 45 or smoking, yet she’d developed the cancer that accounts for just one percent of all adult cancer diagnoses.

The cancer typically starts in the bone marrow, disrupting the production of white blood cells, which are a critical component of the immune system.

‘I received the official diagnosis of acute myeloid leukemia when my mom arrived at the hospital as the hospital staff didn’t want me to receive the diagnosis alone, which I’m thankful for,’ said Kyla. 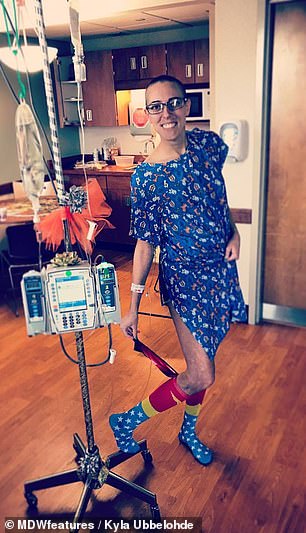 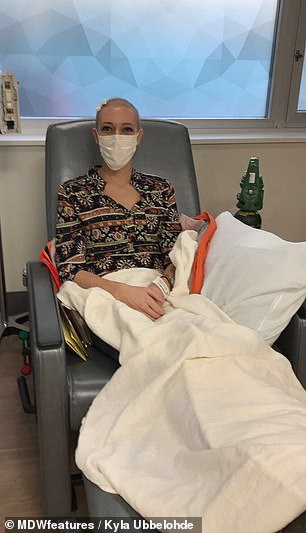 Despite having always been healthy, Kyla had to undergo six months of chemotherapy (right).  She says she was on 11 different chemo drugs in order to combat her leukemia (right) 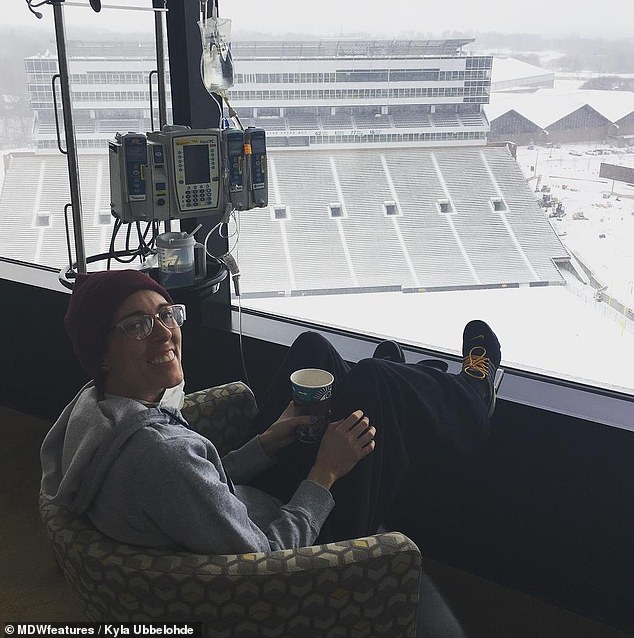 When she finished chemo, Kyla was starting to feel like herself agian, until a trip back to the doctor after just six months revealed that she’d relapsed and needed a bone marrow transplant

Despite her low-risk profile, Kyla’s cancer was aggressive and she was immediately put on an intensive chemo regimen over six months.

Kyla tried to remain optimistic throughout treatment, and she was told that her cancer was responding well to chemotherapy which encouraged her to keep going.

‘It seemed like every time we got an update it was always positive,’ Kyla said.

Once the six months were over, nurses gave Kyla the green light to resume her normal life.

‘I felt able and powerful, so I started working out again and looking for a new job,’ said Kyla.

But, just six weeks after finishing chemotherapy, blood tests at a routine appointment showed odd readings once again, and Kyla was later informed that she had unfortunately relapsed.

Her doctors told Kyla the genetic mutation driving the cancer was different the second time around and it didn’t respond to the chemotherapy. 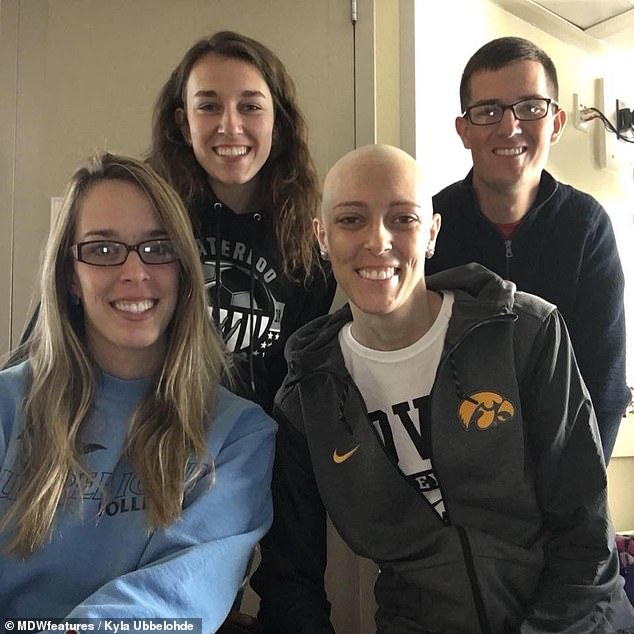 Kyla didn’t have time to connect with a perfect marrow match, so all three of her siblings had their blood tested to see if they might be a match 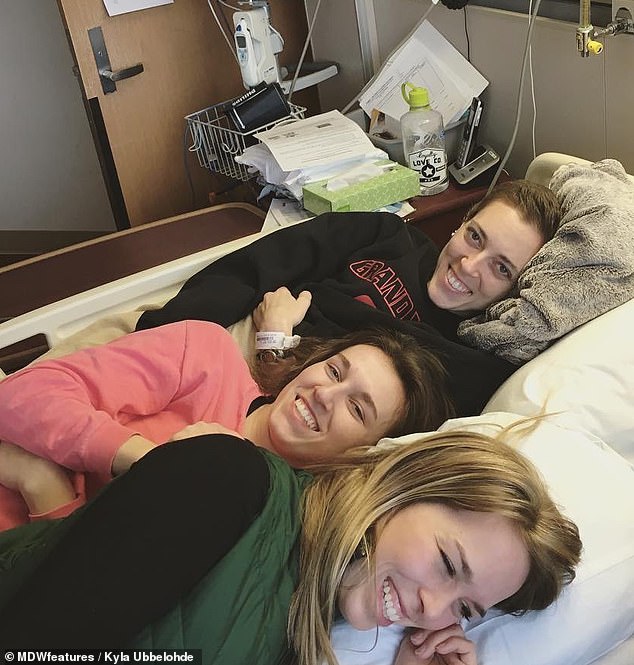 Kyla’s sisters (pictured) were good company during treatment, but they weren’t matches for her marrow

‘I was devastated by the news. The mutation was different to the first one, so the previous chemotherapy didn’t respond. The doctors started a different regiment which was more potent, but that also failed,’ she said.

‘As I’d had so much chemotherapy, and trialing too many chemotherapies could cause more harm than good, I ran out of options.

‘My only chance at living was a bone marrow transplant, and I had many perfect matches in the registry, but because of all the additional testing and preparation a donor goes through, it would have taken too long, and I didn’t have time.’

After testing all of her siblings, it became clear that Kyla’s best option was a bone marrow transplant and her brother, 22-year-old brother, Kyle, who was the closest match – but the two were only 50 percent compatible.

When donor and recipient are imperfectly matched, the chances that the recipient’s body will reject the donor stem cells are higher and the necessary preparation and recovery are more rigorous, especially for the recipient.

There wasn’t time to identify a closer match and as Kyle wasn’t local, organizing for him to be the donor was arranged over FaceTime and he flew in to donate.

‘Thankfully, it gave me an option to live, but I was worried because it wasn’t a perfect match and I didn’t want the process of donation to be painful for my brother. I also didn’t want him to feel guilty if the transplant failed,’ Kyla said.

Kyle went through a week of injections to prepare his body to donate before his stem cells were harvested and then donated to Kyla through an IV drip the following day. 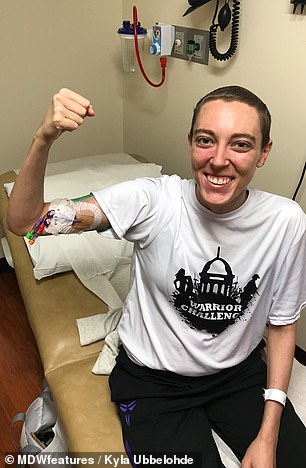 Kyla’s brother, Kyle (left) was a 50 percent match for her marrow type – the best option she had on her short timeline. In 2018, Kyla underwent the bone marrow transplant and had to be in isolation for seven weeks to prevent infection while her immune system was weak (right) 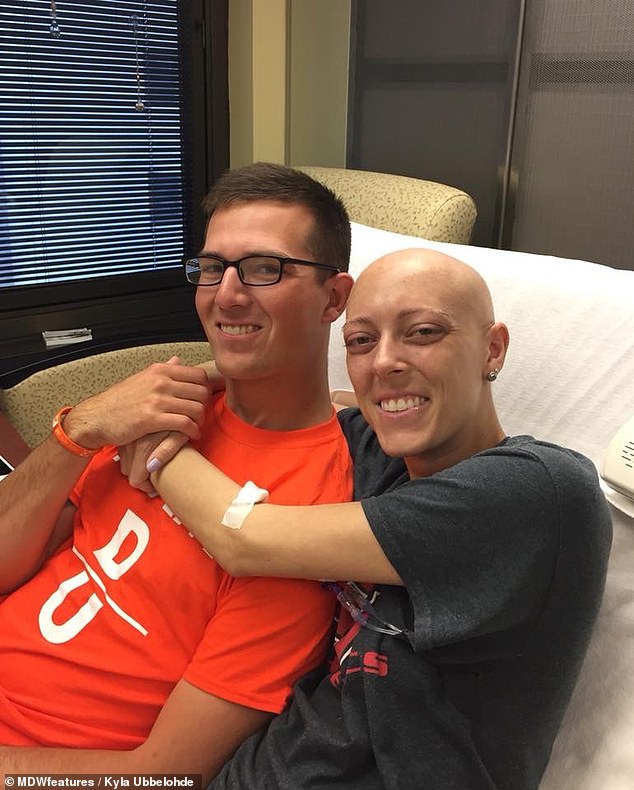 Although Kyla worried that she might put her brother, Kyle (left) through an invasive procedure only to have it fail, the transplant worked and she’s now been in remission for a year

The transplant was on May 3, 2018 but Kyla couldn’t see people for seven months as she was susceptible to infections.

‘One of the major things about being a young adult with cancer is the isolation. I could only have visitors when my counts were high enough and I was so susceptible to infections that even something small could kill me. I spent seven months in isolation,’ said Kyla.

‘For the first three months, it was total confinement and the only time I got out of the house was to go to appointments. The next four were still very restricted but I could see a few people if they weren’t sick or been around people who were sick.’

It was too dangerous to be around most friends and family and Kyla was too drained from the grueling treatment to do much to entertain herself.

‘I was so weak and unable to do much more than eat and sleep before. It’s a long recovery and it was slow at first, but soon enough the weeks of tiny progress turned into months of bigger progresses,’ Kyla said.

‘During recovery I couldn’t do much, I had no energy and sometimes I wished that the leukemia had killed me. When I talked to a therapist, I found that’s very common ideology and everything I was feeling was normal.

‘It’s very damaging for young adults to have cancer, no matter the diagnosis or prognosis. My life since transplant has been a constant struggle but I’m trying to make the best of it. I have a different outlook on life in terms of what’s important.’

In June 2019, Kyla was able to celebrate one year in remission by hiking and camping, something she loved to do before her diagnosis but couldn’t do while she was being treated.

‘Before cancer, I had my whole life planned out in terms of holidays, academic goals, personal goals and financial goals,’ Kyla said.

‘Life can really change in the blink of an eye. Isolation showed me even if you’re alive it doesn’t mean you’re living. Now, I try to do as much as possible while I can. I really didn’t think I’d make it this far.

‘Live your life boldly and free of taking other people’s criticism to heart, live life for yourself not others.’

John Oates of Hall & Oates says he slept with ‘thousands’...

Nailed it: Researchers unveil octocopter carpenter that attaches shingles to a...

The US could be hit by eight hurricanes before December