A Seattle woman has died after contracting a a rare brain-eating amoeba from using tap water in a neti pot – which turned her brain into ‘bloody mush’.

Doctors had prescribed the woman, 69, to use the pot to flush out her nasal cavity after she’d been suffering from a persistent sinus infection.

But she used Brita-filtered water instead of sterile water and soon developed a strange rash on the bridge of her nose.

Unbeknownst to her, over the course of the next year, an amoeba was gnawing away at the woman’s brain tissue.

By the time she was seen at a hospital, the woman’s left arm was seizing, she couldn’t think straight and the amoeba had devoured a section of her brain and turned it to amoebic ‘mush,’ one of her physicians, Dr Charles Cobbs, told the Seattle Times. 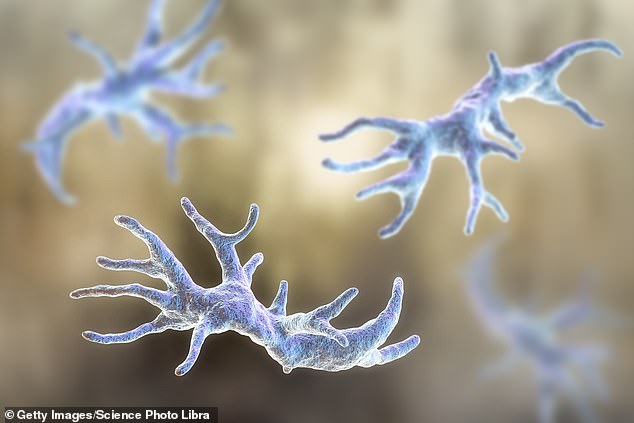 A 69-year-old woman in Seattle died after a rare, Balamuthia amoeba (pictured) from the unsterilized water she used in a neti pot attacked her brain, turning sections to ‘mush’

Brain-eating amoebas are extremely rare, but they lurk nearby in water and soil.

There are only a few forms that infect humans, most commonly the Naegleria species, according to the Centers for Disease Control and Prevention.

Naegleri is the notorious brain-eating amoeba, and it has infected 34 people in the US since 2008.

Yet, this woman’s infection was negative for Naegleri.

The amoeba that infected her, Balamuthia was only discovered in 1986 and has struck at least 200 people worldwide and 70 in the US since.

Balamuthia is almost always fatal – 89 percent of the time – and is difficult to diagnose in part because it may take weeks or even months for symptoms sto develop.

The unidentified woman whose illness was reported in an International Journal of Infectious Diseases simply wanted to rid herself of a pernicious sinus infection.

When other treatments didn’t seem to bring her relief, a Seattle doctor told her try a neti pot to irrigate her nose.

But she skipped one crucial step of the doctor’s instructions: she didn’t use properly sterilized water.

Bottled or boiled water is considered sterile. The woman in stead put tap water through a Brita filter, which is comprised of carbon and ion-exchange resin materials. 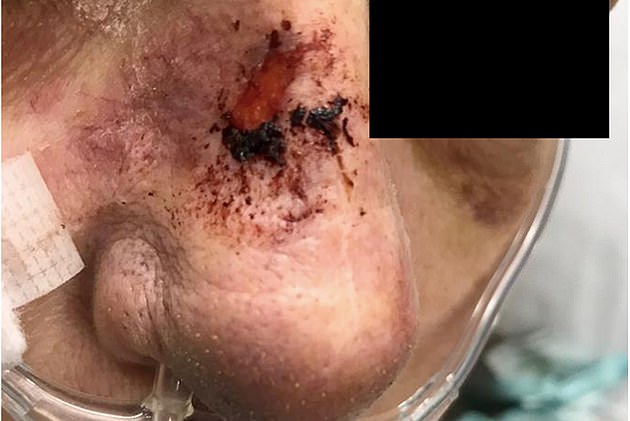 The woman’s first symptom was a strange, persistent rash on the side of her nose (pictured)

It’s an effective way to rid water of some larger microorganisms and impurities that might affect taste and smell, but the mesh was not enough to stop the amoeba.

She used the neti pot for a month, then suddenly developed a strange, red, raised rash on one side of the bridge of her nose.

Several trips to the dermatologist and three biopsies over the course of a year still didn’t reveal a diagnosis.

Her tissue was clearly inflamed and there were strange cells in the biopsy, but whatever was blighting her nose wasn’t actually killing skin cells.

Dermatologists’ best guess was that she had a form of rosacea, and perhaps some complicating infections.

The next time the woman came onto doctors’ radar she was at a hospital, conscious, but suffering from a focal seizure that was making her arm shake uncontrollably and she was completely incoherent, and did not seem to understand anything going on around her.

It was clear that something was wrong with her brain and, in a CT scan, doctors saw a fairly large part of her brain that had become softer than the rest of the neural tissue. The contrast dye circled it like a bullseye.

She had a history of breast cancer, so the doctors’ first guess was that it had returned and metastasized in her brain, or that she had developed another cancer, a glioma.

Even with cancer, brain abscesses like the woman’s are rare, the case study authors write.

‘Even more rarely, spontaneous fungal or amoebic infections are identified as the cause of the brain abscess,’ they wrote, so these causes were low on their list of possibilities. 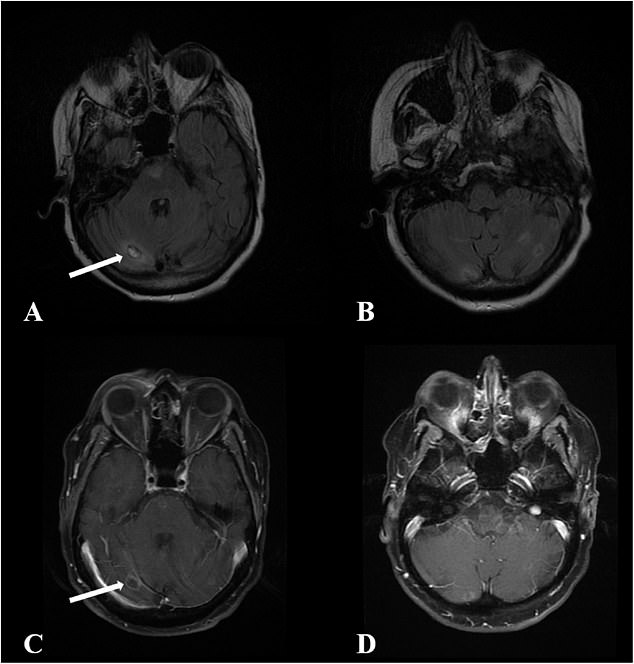 She was treated with anti-seizure medications, and sent home two days after her biopsy. Six days later she was back with numbness in her left arm and leg. She returned again after 15 days. She couldn’t think straight and brain scans revealed that the soft spots in her brain were growing – and multiplying.

At last a consulting doctor from Johns Hopkins University suggested that an amoeba might be preying on her brain.

The medical team quickly contacted the Centers for Disease Control and Prevetion (CDC) which rushed a novel drug to treat amoebic infections to the hospital.

But it was too late.

Despite aggressive treatment, the woman was soon barely able to stay awake. Within a week, she slipped into a coma. The infection sites were bleeding out into her brain.

The woman’s family decided to let her go, and took her off life support.

More common naegleri infections have been known to strike people who have done nasal irrigation – three in the US, to be exact – but this was a new point of entry for Balamuthia, a ‘comparably insidious amoeba,’ the doctors wrote.

Balamuthia also doesn’t have as many known, distinct characteristics as its more common waterborne cousin, so the doctors worry that ‘it is possible that many more cases of Balamuthia have been missed.’

‘Clinicians should be aware that patients who develop a nasal rash after sinus irrigation with non-sterile saline washes might be at high risk of amoeba skin infections,’ they cautioned.

Footballers flouting Covid rules in group hugs is ‘brainless’ and an...

More than 40% of GPs intend to leave the profession in...