Woman, 51, is left PARALYSED from head-to-toe after taking cocaine and is now only able to communicate using her eyes

A 51-year-old woman has been made a prisoner in her own body and only able to communicate with eyes after using cocaine.

The unidentified patient, from Maryland, suffered a rare but devastating brain-stem stroke which paralysed her from head-to-toe.

She was diagnosed with locked-in syndrome, meaning she can think, see and feel but cannot eat, talk or move any muscles aside from her eyes. 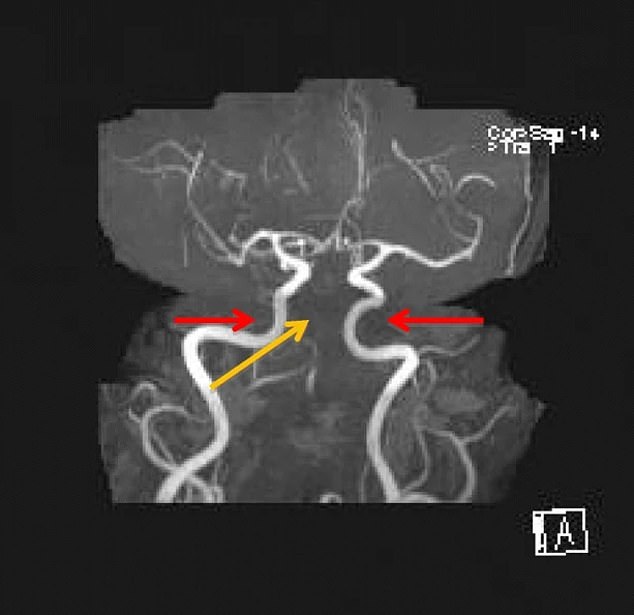 Although cocaine use is a well documented contributing factor in strokes, only a handful have led to full-body paralysis.

And scientists estimate less than one per cent of people who have a stroke develop locked-in syndrome.

The obese African-American woman was taken to hospital in February 2015 by her boyfriend after acting erratically and struggling to string sentences together.

Her pupils were dilated and sluggishly reactive to light. Blood tests revealed she was high on cocaine earlier and had taken opioids earlier that day.

But her heart rate, blood pressure and body temperature were relatively normal for her age and weight.

She was sedated and kept in hospital, but when she sobered up her health began to deteriorate.

Three days after admission she struggled to muster the strength to move her limbs, medics revealed in the Journal of Medical Case Reports.

By day four, she was minimally responsive and was able to communicate only with vertical eye movements.

A CT scan revealed blood was no longer flowing through her basilar artery, the brain stem which helps pump it around the body.

The team of doctors from the University of Maryland School of Medicine believe she had a delayed stroke triggered four days after cocaine use. It makes her case the first of its kind in scientific literature.

The medics say cocaine use should be recognised as a potential cause of locked-in syndrome and urge all clinicians to take a urine sample from patients with altered mental status.

They underscored the importance of awareness of the serious complications of cocaine use.

There are more than 100,000 strokes in the UK each year and roughly 800,000 in the US. Locked-in syndrome affects less than one per cent of victims.

WHAT IS LOCKED-IN SYNDROME?

Locked-in syndrome is a rare brain disorder that causes complete paralysis of all voluntary muscles except the ones that control eye movements.

Sufferers are conscious but cannot speak or move. Their cognitive function is usually affected.

Locked-in syndrome is caused by damage to the brainstem that contains nerves that transmit information to other parts of the body.

Such damage usually occurs due to a lack of blood flow or bleeding following trauma.

Patients are unable to chew, swallow, speak or move, aside from their eyes, however, they can see and hear.

Most sufferers are bedridden and dependent on their carers.

Treatment focuses on relieving the underlying disorder, such as bleeding, if possible.

Patients may need tubes to help them breathe.

Small tubes are also inserted in their stomachs for eating and drinking.

Sufferers can be taught to communicate via their eyes.

Doctors warned to hide their families on social media to avoid...

FDA planning to review safety of surgical staplers after thousands of...