A 23-year-old woman is desperate to beat cancer that has left her on the edge of death multiple times.

Daisy Ellis, from Northamptonshire, was diagnosed with stage four cancer after experiencing back ache and collapsing when she sneezed.

The diagnosis of alveolar rhabdomyosarcoma (ARMS), a rare type of soft tissue sarcoma, was hard hitting for Miss Ellis who hadn’t even left university at the age of 21.

But her body suffered badly, regularly experiencing life-threatening neutropenic sepsis, a complication from anti-cancer treatment, which would leave her family at her bedside.

Miss Ellis has stopped responding to chemotherapy, of which she has endured more than 13 rounds, and is currently having radiotherapy.

She documents her story online, in which she says cancer gave her a ‘kick up the butt’ and even cured her of depression and anxiety demons. 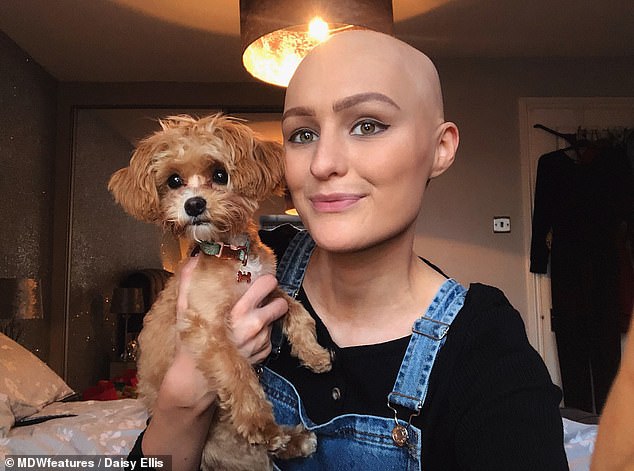 Daisy Ellis, from Northamptonshire, was diagnosed with stage four cancer after experiencing back ache and bizarre back spasms and collapsing when she sneezed. Pictured recently 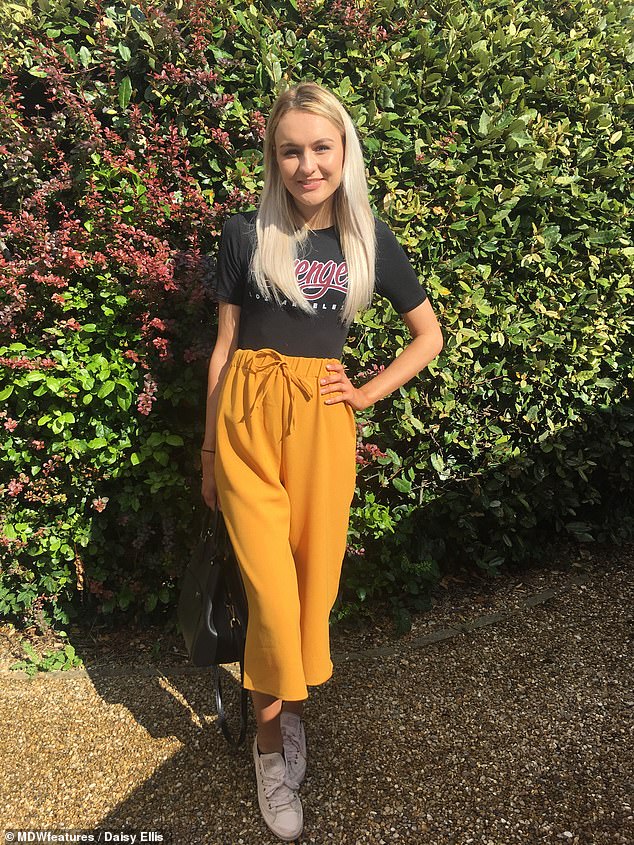 The diagnosis of alveolar rhabdomyosarcoma (ARMS), a rare type of soft tissue sarcoma, was hard hitting for Miss Ellis who was still at university 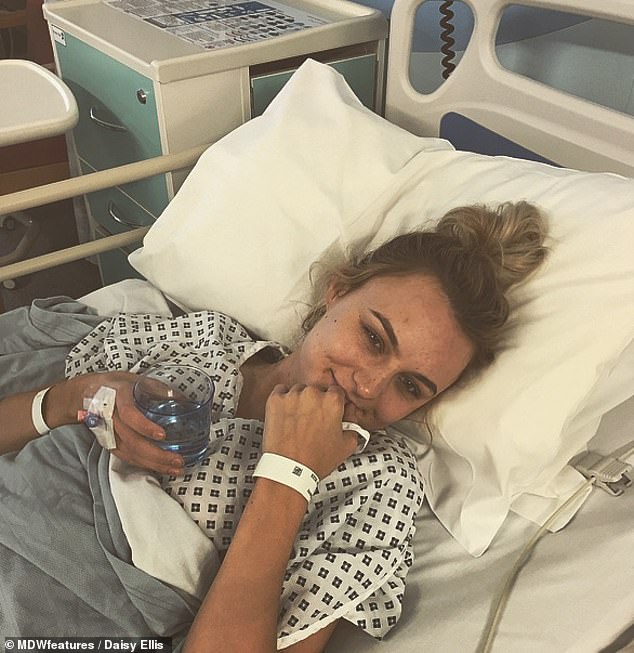 Doctors needed to act fast, giving Miss Ellis the strongest forms of medication from September 2017. Pictured, in hospital before her hair fell out

In April 2017, Miss Ellis had just celebrated her 21st birthday when her back started to ache and she struggled to lift heavy objects.

Moving her things out of her university flat was a challenge but she passed it off as tiredness from overexerting herself.

She said: ‘I couldn’t lift anything heavy, not even the kettle or the hand break on my car. I thought I’d just overdone it with carrying books and my laptop to university every day.

‘If I sneezed, my back would have multiple spasms and I would collapse with the pain. Over summer I was then working at Silverstone Circuit and it just got worse.’

‘I would keep going until I was blue in the face, rather than admitting I needed to go home.’

The pain started to spread to her right leg, which is when Miss Ellis went to the doctor.

‘At this point I visited my GP and things unravelled very quickly. When I was sent to Leicester to see a spine specialist, he said it wasn’t within his expertise, so he sent us to a different ward.

‘When we arrived there, it was a teenage cancer ward. The word “cancer” was plastered everywhere.

‘We then knew it was cancer at the time, but weren’t sure which type. I was waiting by the phone every minute of the day for some answers.’ 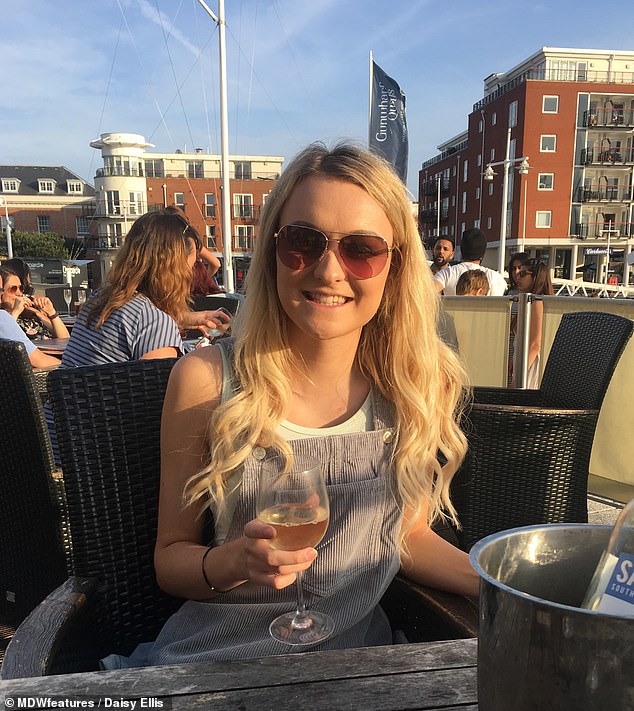 Miss Ellis had just celebrated her 21st birthday when her back started to ache and she struggled to lift heavy objects, but she passed it off as her tiredness from overexerting herself 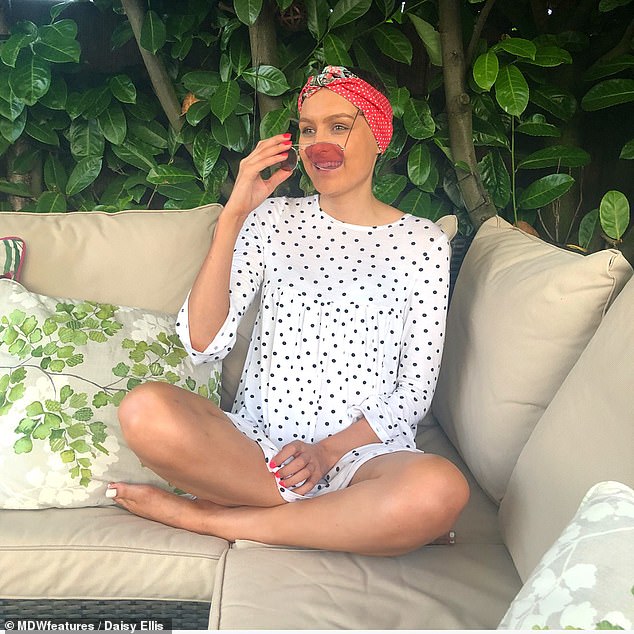 Miss Ellis, pictured embracing her bald look during treatment, said a visit to her GP unravelled quickly and she was referred to a ward where the word ‘cancer’ terrified her 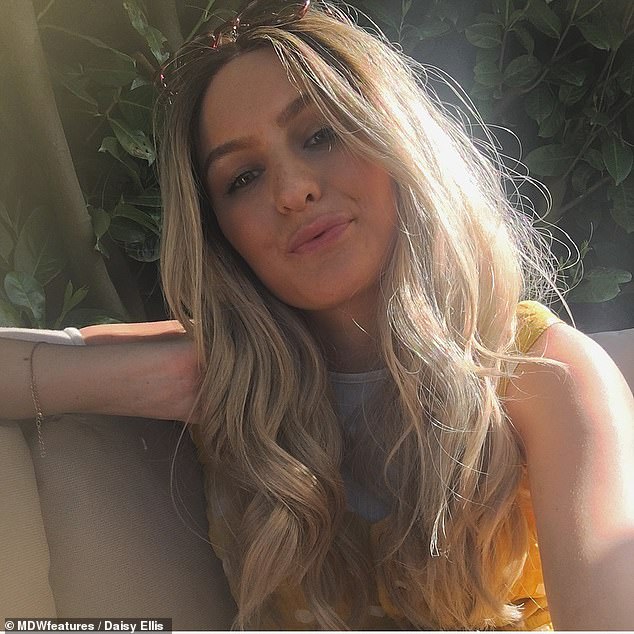 During six rounds of chemotherapy Miss Ellis’ hair began to fall out and she was forced to shave the remaining hair off, which devastated her. Pictured, wearing a wig

The cancer grows in active muscles of the body, for example the muscles used to move arms and legs.

This type tends to occur in older children and adolescents, and overall, there are 3,300 new cases of rhabdomyosacromas diagnosed each year in the UK.

Miss Ellis said: ‘I was so poorly I didn’t even understand what was going on. At this point, I didn’t care what the diagnosis was, I was just relieved to have an answer.’

The student tried to ignore how serious her condition was, despite her friends being worried.

She said: ‘As I started to tell other people, I tried to deliver the news without sounding dramatic. But when the word “cancer” is involved, that’s quite hard.

‘I remember telling my friends, “don’t worry, I’ll be back at uni by Christmas, I’m going to be absolutely fine”. But I wasn’t. My mum couldn’t even say the word “cancer”.

When Miss Ellis began her treatment in August 2017, her consultant informed her that there was a fifty-fifty chance of her body responding to the chemotherapy treatment, due to how fast the cancer had spread.

She said: ‘They picked out the hardest drugs and just threw them at me, with all hope my body would have some kind of positive response.

‘Nobody was hopeful in the beginning; my prognosis was shocking. Mainly because it was stage four and metastasised around my body.

‘Also, they have never known the primary site of where it began, so this can never be removed or treated.’

During six rounds of chemotherapy her hair began to fall out and she was forced to shave the remaining hair off, which devastated her. 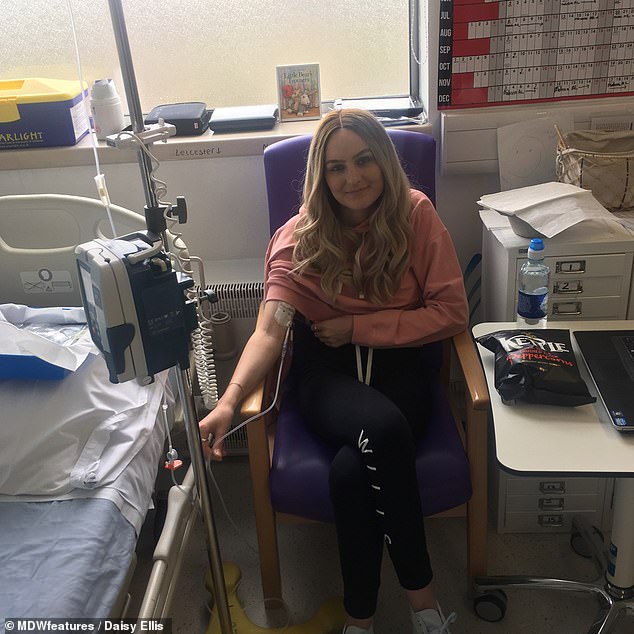 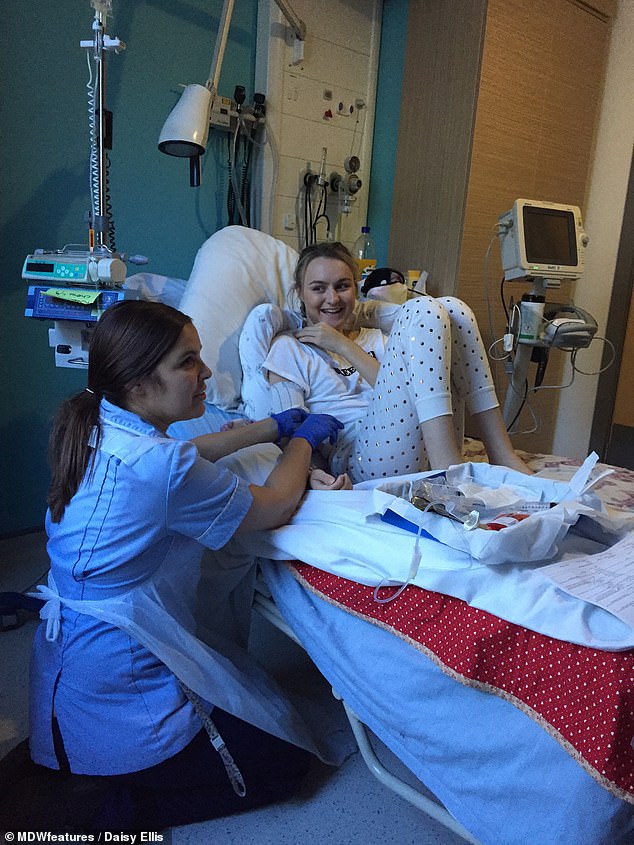 A consultant informed Miss Ellis that there was a fifty-fifty chance of her body responding to the chemotherapy treatment, due to how fast the cancer had spread 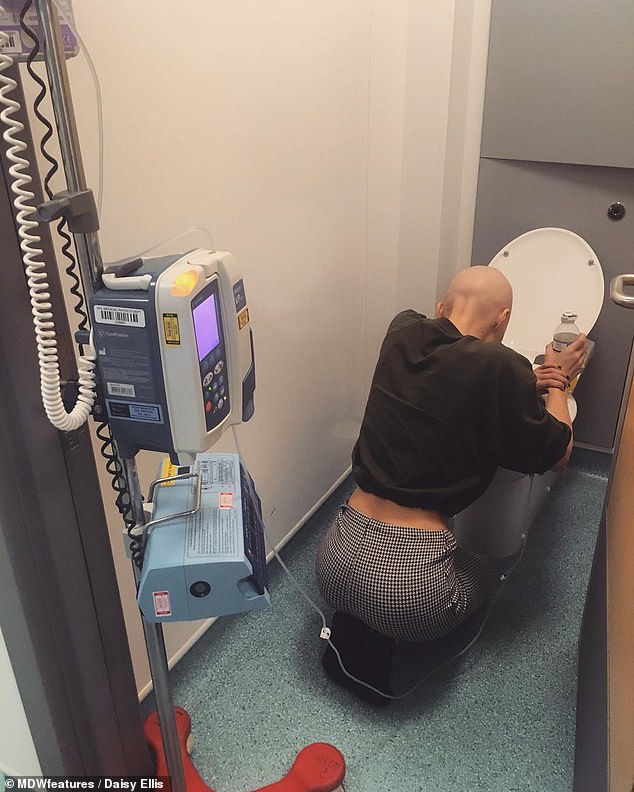 Miss Ellis’ body reacted so badly to the treatment, that she regularly experienced neutropenic sepsis that causes a fever of over 100 degrees Fahrenheit or higher, chills or sweating, sore throat and abdominal pain. Pictured, unwell during treatment

Sarcomas are rare types of cancer that develop in the supporting or connective tissues of the body.

Soft tissue sarcomas can develop in muscle, fat, blood vessels, or any of the other tissues that support, surround and protect the organs of the body.

About 3,300 new cases are diagnosed each year in the UK.

Rhabdomyosarcomas grow in the active muscles of the body.

The most common places for them to be found are the head, neck, bladder, vagina, arms, legs and trunk of the body.

Alveolar rhabdomyosarcomas tend to occur in older children and adolescents.

It is usually treated with chemotherapy, along with surgery or radiotherapy – but it’s unknown what causes it.

Most rhabdomyosarcomas are diagnosed after a person develops symptoms. These may include:

Miss Ellis’ body reacted so badly to the treatment that she regularly experienced neutropenic sepsis, a life-threatening complication of anti-cancer treatment that causes a fever of over 38 degrees Celsius or higher, chills or sweating, sore throat and abdominal pain.

‘Neutropenic sepsis was a regular occurrence; one night I remember my mum just watching me sleep all night, thinking I wasn’t going to make it to the morning because they couldn’t get an infection under control.’

Between November 2018 and January 2019, Miss Ellis underwent four more rounds of chemotherapy only to be told that her body had stopped responding to the treatment.

She said: ‘I bravely asked my consultant if this makes my cancer terminal. She didn’t give me a straight answer, which is worrying.

‘I know my cancer is incurable, but it’s always been treatable. So where does this leave me? Am I going to spend the rest of my life fighting this thing off?

‘I’m living in knowledge that whether they treat my cancer this time or not, it is incurable, and it will always come back.’ 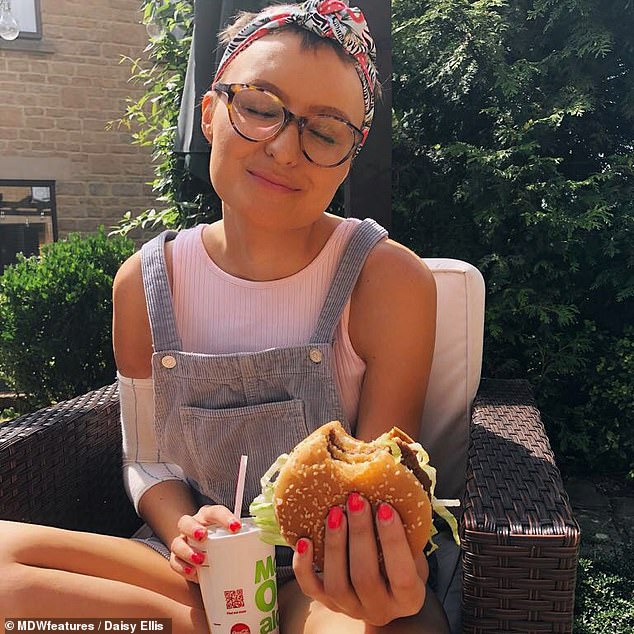 Pictured with less hair, underwent more chemotherapy when a scan revealed the cancer had returned in her leg. She is currently having radiotherapy 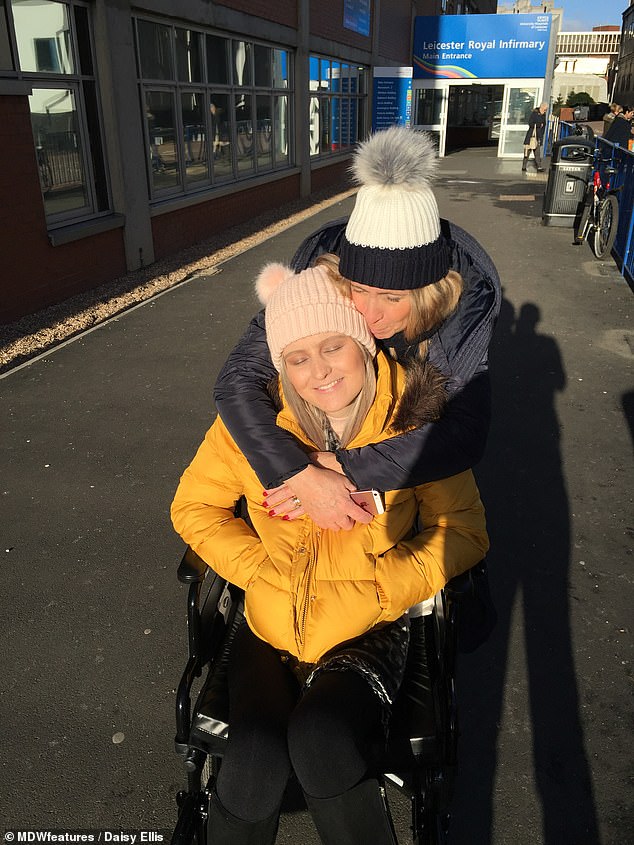 Miss Ellis, who said she knows her cancer is incurable, said cancer gave her a ‘kick up the butt’ and even cured her of depression and anxiety demons

She is doing her best to enjoy her life and continues to update her family and friends on her journey.

She said: ‘I used to suffer with severe anxiety and depression which I have been medicated for, for over three years now. Nothing gives you a kick up the butt like a life-threatening illness and the desperation to survive it.’

‘I feel so proud of myself; I have discovered a strength I had no idea I had. I’m incredibly protective of myself now and know exactly what is and isn’t important in life.

‘I’m a better friend, a better daughter and a better person in general.

‘I know what it’s like to look death straight in the face, and to narrowly avoid dying. I have always hated my body image, but now I can’t help but love my body for all that it’s been through and all that it’s got me through.

‘The scars, the damaged spine, the bald head; it’s a whole different type of self-love.’

Musician in relationship with ‘African Kim Kardashian’ to run for president

Hundreds of women claim their IUD gave them a neurological disorder