Nationwide has launched a marketing campaign about protecting branches, so why is it closing our local building society?

I received a letter this morning from Nationwide Building Society saying they will be closing down my local branch in Portswood, Southampton.

This was two days after they have begun advertising how they will not close down any branches for more than two years where they have a presence.

This is/was probably the best, most helpful branch in the area and I’m sure others go out of the way to use the service that the staff provided, nothing was ever too much trouble. Via email.

Nationwide has pledged to keep at least the ‘last branch in town’ open until 2020, but has said it will still close branches ‘where it makes sense to do so’

George Nixon, This is Money, replies: In the blurb of a YouTube video launching its ‘high street romance’ adverts, Nationwide said it was ‘reaffirming [its] commitment to the high street by making a promise that every town and city that has a Nationwide branch today, will still have one in two years.’

What’s more, its campaign highlights ‘bold commitment to protect branches’, which was reported by outlets including the Financial Mail on Sunday last week.

You might therefore be a bit shocked to then find out your local branch is closing.

However, Britain’s biggest building society added in its information about the marketing campaign: ‘Nationwide will still close branches where it makes sense to do so, for example where two outlets are near each other and could better serve members if they were combined and received additional investment.’

When contacted about the case of the Portswood branch, Nationwide told This is Money that it had announced the plan to close the branch in June.

It added the branch was ‘underused’ and it was a ‘better use of members’ money’ to close it, with most using nearby branches. 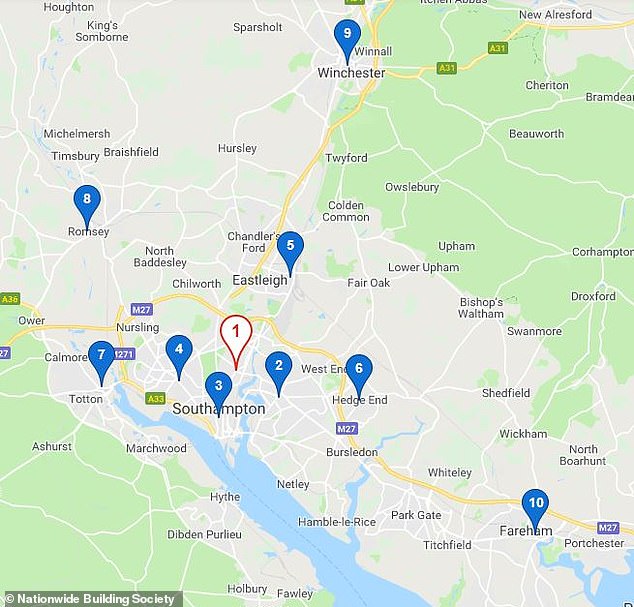 Nationwide has six branches within a seven-mile radius in Southampton. It says the Portswood branch (number 1) is underused and so will close in June

A Nationwide spokesperson said: ‘In this area we currently have six Nationwide branches within a seven-mile radius including our newly refurbished flagship Southampton branch, which is fewer than two miles away, as well as refurbished branches in Eastleigh, Bitterne and Shirley.

‘We know a large proportion of these members are already using other local branches which we hope will limit the impact of the decision on them.’

However, it is keen to stress the branch promise is not shorthand to close branches, nor is it looking to close branches specifically and that it is investing £350million into its branch network in the next five years.

The promise says that every town and city that has a Nationwide branch today, will still have one in two years.

To keep that commitment, theoretically, it could technically close six out of seven Southampton branches and still stick to the promise. 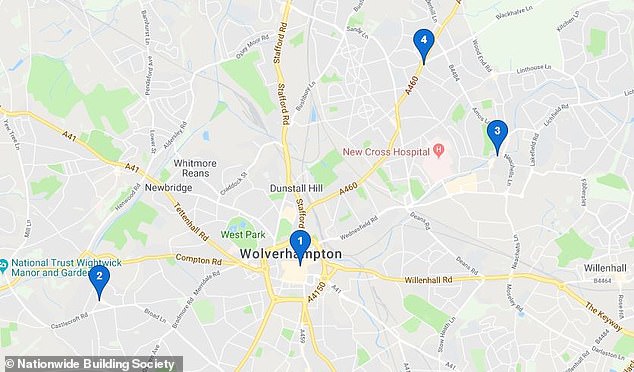 No branches are set to close there, but This is Money asked Nationwide whether it could still keep its branch promise by closing branches 2, 3 and 4 and keeping only number 1

In order to seek clarification on this, This is Money asked Nationwide about Wolverhampton as an example.

When asked whether this meant Nationwide could close the other three branches keeping just the branch in central Wolverhampton open to stick to the promise, the building society reiterated its point about not looking to close branches and saying its branch network won’t ‘materially change in size’ over the next 12 months.

THIS IS MONEY’S FIVE OF THE BEST CURRENT ACCOUNTS