A firefighter calls for water as a mobile home park burns in the Sylmar Fire in Sylmar, California.

Wildfires are not a new phenomenon to the California ecosystem, which has tracked wildfire data since the early 1900s. Native Americans used to burn forests to maintain forest health.

California’s Mediterranean climate keeps forests without rainfall for months at a time, which leads to a drying out of vegetation. Droughts are commonplace, with the state finally getting relief from a seven year drought earlier this year.

Dry summers lead to wet winters, but the interval between the two becomes the prime season for wildfires.

With temperatures warming due to climate change, vegetation is drier for longer periods than in years past. A heavy accumulation of “fuel,” the low shrubs, dry grass, and young trees that act as a ladder between the forest floor and large canopy overhead, become tinder when wildfire season comes in the fall.

In combination with hot, dry, 60 to 70 mph Santa Ana and Diablo winds traveling from the east, this fuel creates the apocalyptic fires that swallow communities and forests whole.

“These are not really best described as wildfires. Most people describe them as fire storms,” says Jon Keeley, a research scientist at the U.S. Geological Survey.

“It is not something that firefighters have much chance of putting out until the wind dies down.”

According to the Fourth National Climate Assessment, climate change has doubled the area of forest burned in the western United States between 1984 to 2015.

In some cases, these firestorms can burn 10,000 acres worth of forest within an hour. Storms of that intensity are practically impossible for firefighters to contain, often leaving them with no choice but to let the fire run its course as officials concentrate on getting anyone in danger out of the way.

However, climate change is just part of the reason wildfires have become a bigger threat. A growing population, spread out into forested regions largely uninhabited until recently, is placing people and nature more at risk of being burned.

California is the most populous state in the nation, with over 39 million. The population has swelled in the past century, with 1 in 8 Americans calling California home.

That population swell has leaked out of the urban confines along the coast and into California’s forest regions further inland. As communities encroach on historically uninhabited wildlands, the line between nature and society blurs.

“Population growth is making (wildfires) more deadly but it’s also making them more likely,” says Keeley. “The more people on the landscape means more opportunity for a fire during one of these wind events.”

Fires can burn hundreds of thousands of acres under the right conditions, but every fire needs a spark. 95% of California’s wildfires are caused by humans, according to the California Department of Forestry and Fire Protection. These fires don’t need to be started with malicious intent, such as arson. Fires can be caused by much more innocuous events, like a discarded cigarette butt, a lawnmower riding over a big rock, or a spark from a car.

Recent wildfires, such as the Kincaide fire in Sonoma County that burned over 77,000 acres, are often caused by downed power lines that land on trees and spark a blaze.

“Understanding of these things has reached a stage where you can think of prescribed burns as comparable in safety to running a lawnmower through the area,” says Chris Field, Director of the Stanford Woods Institute at Stanford University.

These methods haven’t been accepted universally, with some Californians voicing concerns about the impact on air quality and fears that the fires could spiral out of control.

In the long term, communities are being developed cognizant of the risk that wildfire poses to them. New developments are being constructed with fire-hardened materials, firebreaks between the woods and developments, and multiple evacuation routes in the event of a fire. Despite this, the strategy is designed for the long term and might not see results immediately. 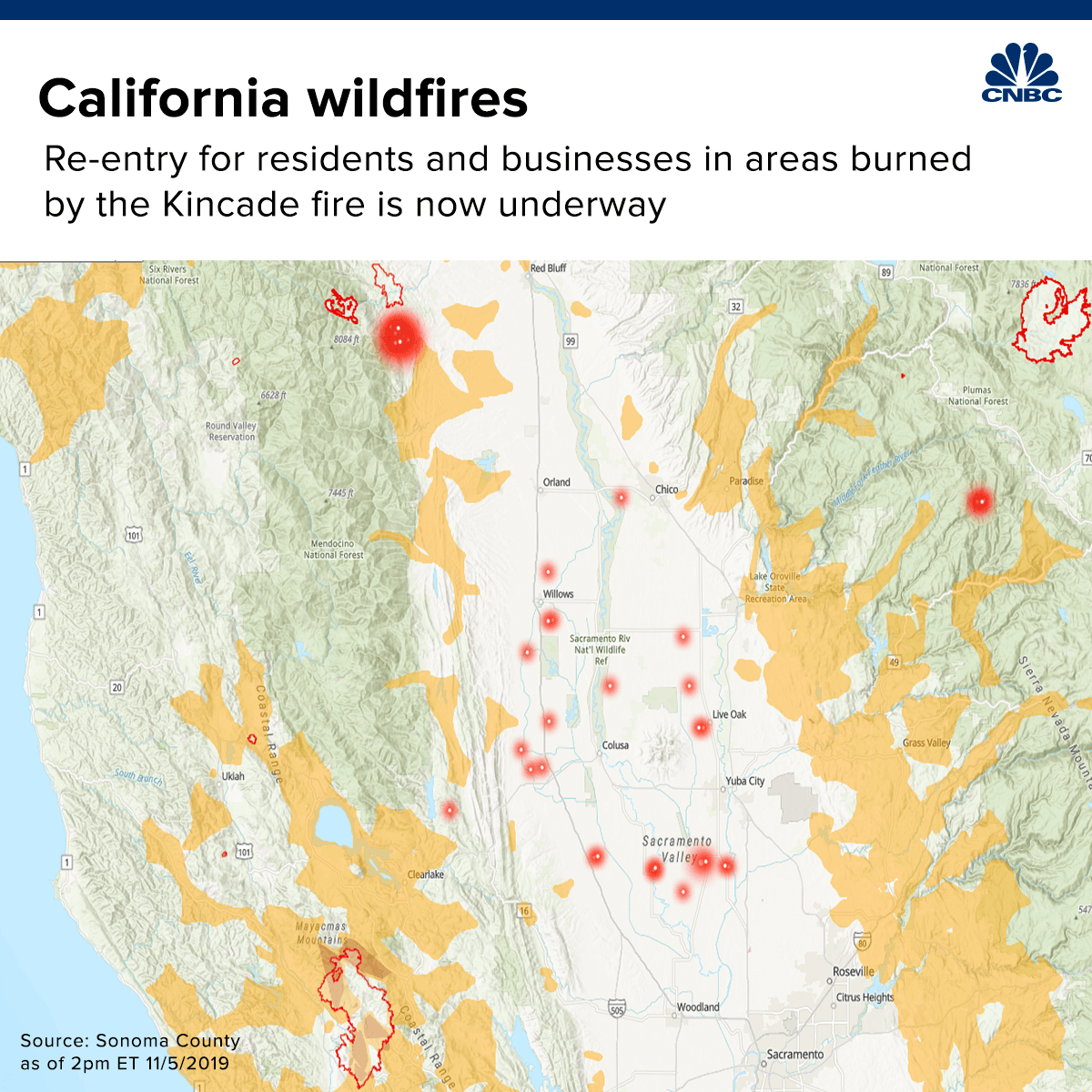 Power utilities, which have faced a mountain of backlash from customers and politicians on both sides of the political aisle, have tried to do their part in preventing fires before they happen. Pacific Gas & Electric, which declared bankruptcy this year after its role in causing the deadly 2018 Camp Fire, has issued rolling blackouts to vulnerable communities when Santa Ana and Diablo winds start up.

The decision has been heavily criticized, but it could become the new normal until the utility commits itself to placing its lines underground. Recently, California’s mayors in cities like Oakland,. San Jose and Sacramento have banded together in a bid to buy out PG&E from its investors and make it a customer-owned cooperative, but the company has fought against a takeover.

Winslow Hansen, a research scientist at Lamont-Doherty Earth Observatory, says Californians will need to do their part in limiting fires, using caution when operating chainsaws, lighting campfires, and using anything that produces a spark.

“I think what we’re going to have to figure out is how we can adapt to the conditions we are stuck with in terms of increases in fire,” Hansen says.

“I don’t think there is a way to necessarily manage our way out of it.”

Single mums retire on tiny sums compared with other women and...

Tesla to Enact 5-for-1 Stock Split