When Stan Kroenke announced his full takeover of Arsenal last year, it was seen as a ‘dreadful day’. At least those fans in north London can still go watch their team.

This weekend, the American’s LA Rams will line-up for the Super Bowl, the pinnacle of the sporting calendar in the United States. It is the equivalent of the Gunners reaching the Champions League final just two years after being relegation candidates.

Not that fans of Arsenal would take the trade-off that has led the Rams to this point. It has involved a 1,900-mile relocation under the gaze of the man who came to be known as ‘Silent’ Stan. 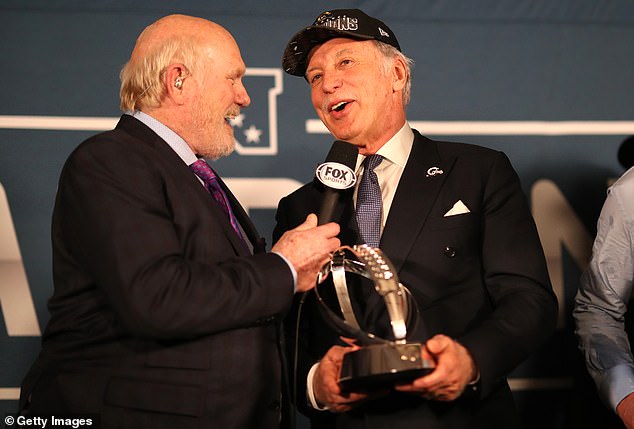 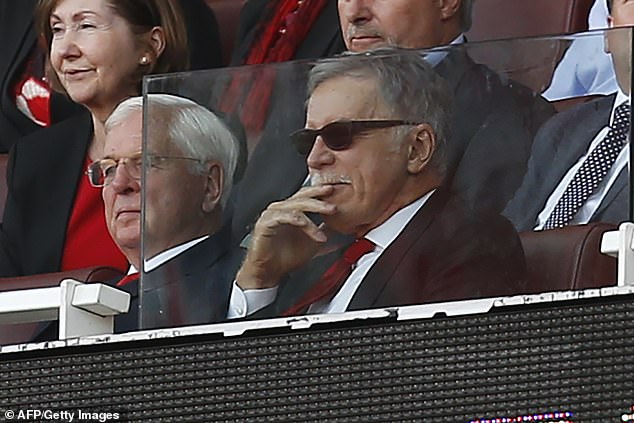 Kroenke is not well liked in London but he is reviled in St. Louis after the team’s move

It all comes on the back of an acrimonious move from St. Louis to Los Angeles in 2016 over stadium issues and a better potential market. Think Wimbledon moving to Milton Keynes with another thousand miles thrown in.

The Rams will line up at Mercedes-Benz Stadium on Sunday in a unique position. As a general rule, when the Super Bowl comes around, the nation — aside from New England — supports whoever the Patriots are facing.

Not in Missouri this weekend, and among some neutrals too. An article in The Nation this week was headlined: ‘The Rams’ Stan Kroenke represents the worst of the NFL’.

In bars across the city of St. Louis, dart boards with Kroenke’s face on them can be found, while others have put his visage on filters for urinals in case fans want to take another form of revenge. 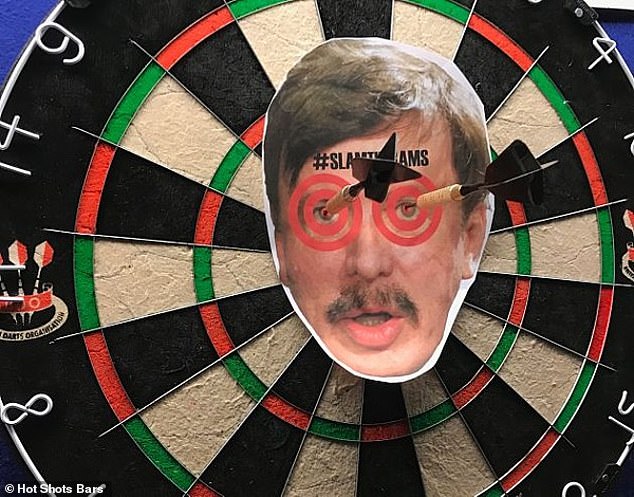 At one set of bars in St. Louis, people are able to throw darts at a picture of Kroenke 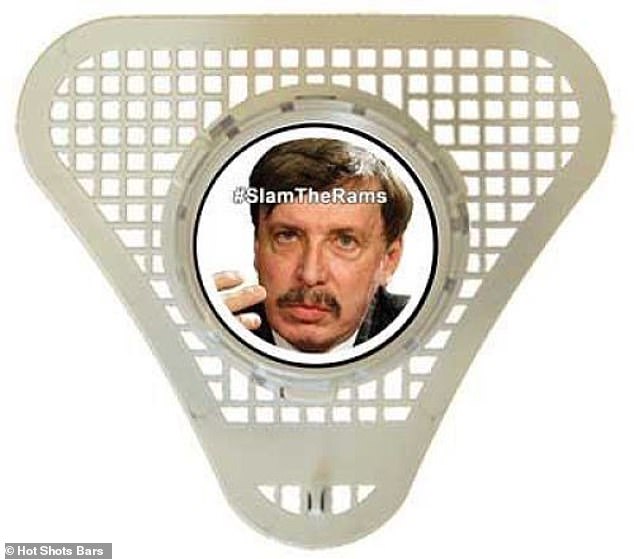 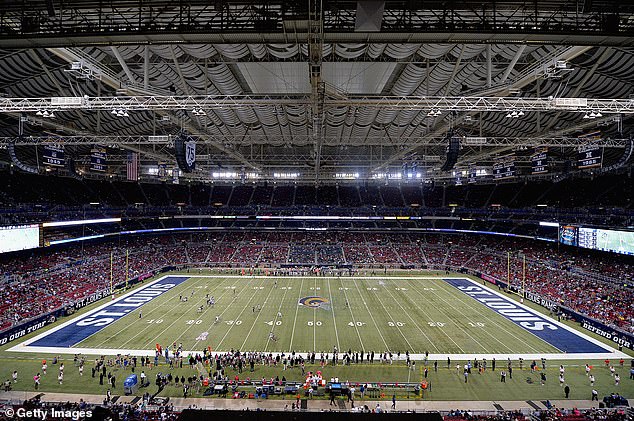 Kroenke was part of the group that initially moved the Rams to St. Louis in the 1980s 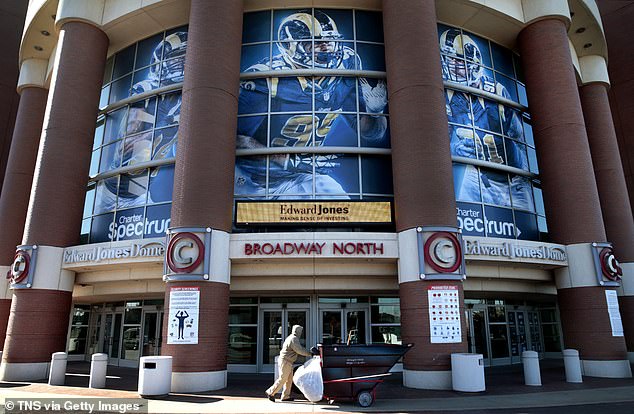 On the other hand, a local radio reporter in LA referred to the 71-year-old as a ‘hero’ when discussing him ahead of Sunday’s showpiece clash.

Kroenke has an interesting past. His wealth — an estimated $8.5million — came through his marriage to Ann Walton, an heiress to the Walmart empire. Both members of the couple are listed on Forbes’ rich list. He has also diversified into real estate, becoming the US’ ninth-biggest landowner in 2015.

Kroenke was born in Mora, Missouri, a small community of only two dozen when his family lived there. Growing up a three hour drive from St. Louis, it seemed as though he was taking the romantic option when he helped the then-LA Rams move to there in 1995. 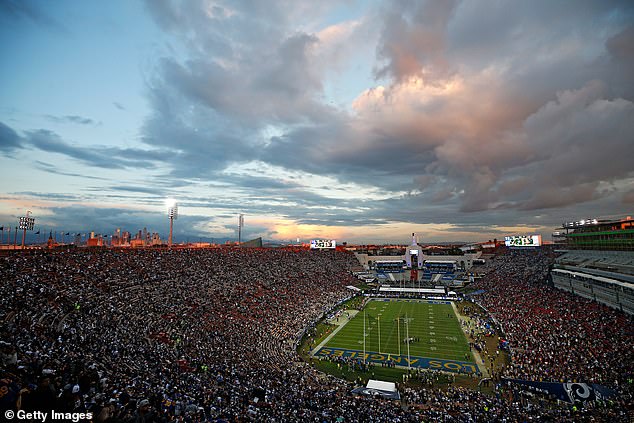 They now play at their former home, Los Angeles Memorial Coliseum, before a future switch

By 2010 he had taken full control of the organisation. That image of local pride came through again. Speaking to the St. Louis Post-Dispatch, he said: ‘I’m born and raised in Missouri. I’ve been a Missourian for 60 years. People in our state know me. People know I can be trusted. People know I am an honourable guy.’

Even then, there were hints at what may come next when he said he’d do everything he could to keep the Rams in St. Louis. It suggested there were other options on the table.

The issue was that the lease on their stadium said that the then-Edward Jones Dome had to be ranked in the top quartile of NFL stadiums according to various surveys run by media outlets. Instead, it was considered among the worst in polls conducted by Time magazine and Sports Illustrated. 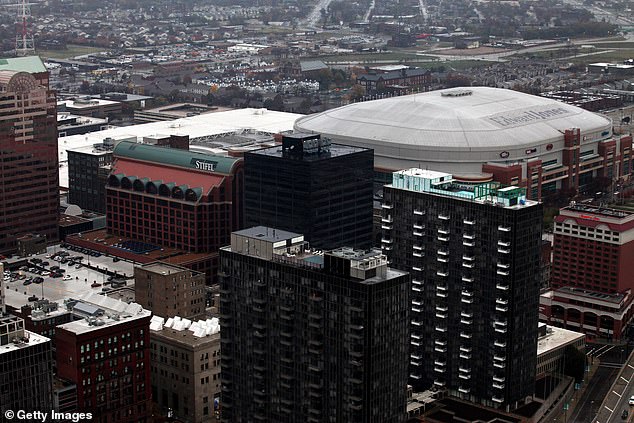 The Edward Jones Dome had to be ranked in the top quartile of stadiums under St. Louis’ deal

This led to a $30m investment in 2005 but not enough was done. That allowed Kroenke to explore alternatives. He went on to break the deal with St. Louis and after buying a huge plot of land in Inglewood, California he had a new home for the Rams. In February 2015 the city council approved a stadium in that location.

At the end of the 2015 campaign, the Rams filed to relocate to LA and the NFL backed the move in early 2016 after they agreed to pay a $550million relocation fee. Kroenke had taken St. Louis’ team out of his own backyard.

‘It truly is bittersweet,’ Kroenke said. ‘I grew up in Missouri, and there’s a lot of wonderful people in St. Louis and Missouri.

‘I’ll always feel that way about Missouri. I never dreamed I’d be put in this position. But at the same time, you’re not going to sit there and be a victim.’ 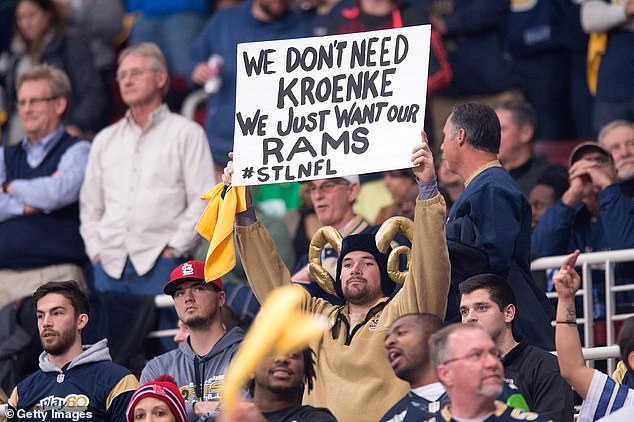 There is still anger at the manner in which Kroenke moved the Rams out of St. Louis 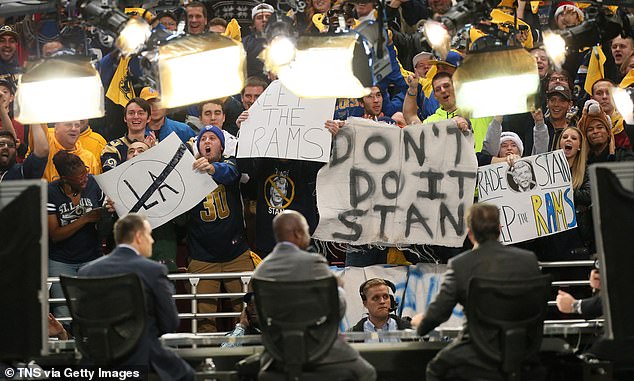 Given the St. Louis NFL Stadium Task Force had come up with a plan that saw them commit $470m of public funds to keep the Rams, victimhood seemed like an overly strong statement.

An editorial in the Riverfront Times was not polite about Kroenke. It was titled: ‘F*** You, Stan Kroenke, and the Toupee You Rode in Under’. Even the Islington Gazette has not gone that strong under his ownership.

At first there was mirth as the LA Rams, back at the Los Angeles Memorial Coliseum temporarily, posted a losing campaign. A local ice cream parlour gave out discounted food every time they were beaten.

Then Kroenke, unlike his time at Arsenal, invested. He brought in hot shot Sean McVay as his head coach — at 30, he was the youngest in modern NFL history. 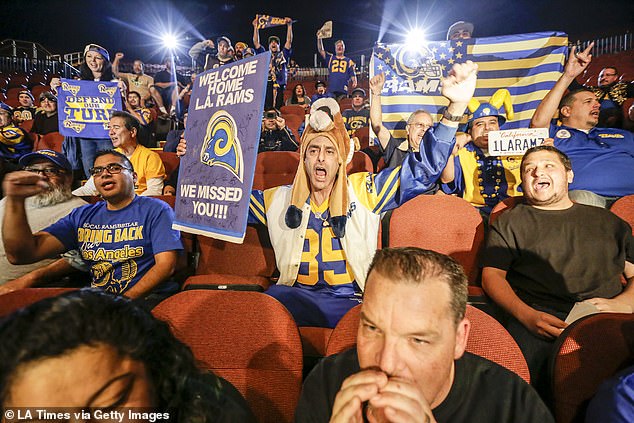 On the other hand, there was delight at the fact that the Rams were returning to Los Angeles 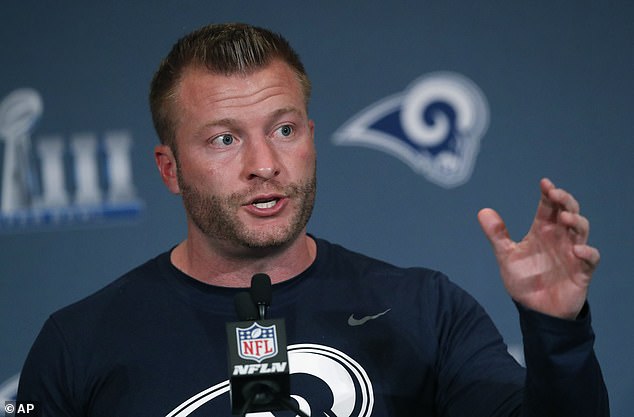 After they won the NFC West crown in 2017 before losing in the play-offs, money was splashed on contracts for Brandin Cooks ($81m over five years) and Todd Gurley ($60m over four years). Aaron Donald penned the richest defensive contract in NFL history ($135m over six years). With the Rams contenders for the grandest prize of them all, the laughs have now stopped.

Kroenke will also contribute $1.6billion to the $2.6bn cost of their new stadium in LA. There is a reward to that. They jumped from a rank of 28th in the Forbes NFL team valuations in 2015 to fourth now.

The Rams are worth twice as much after the move, at $3.2bn. This is a result of the market they now operate in, the upcoming new stadium and their on-field success. 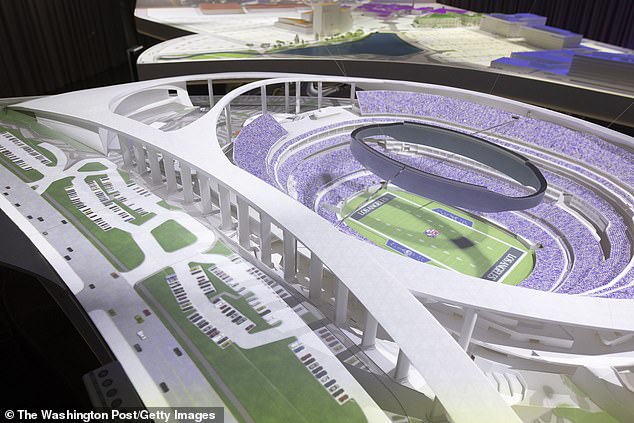 It is why, in the fantastic book The Billionaires Club, Neil DeMause, an expert on public funding of private sports stadiums in the US, said: ‘Kroenke would love to be able to take advantage of European cities and threaten to move somewhere else’.

So while Arsenal fans wonder why their side cannot reach the same heights as their owner’s NFL concern, and why they are scrabbling around for loans while money is splashed across the pond, they can hold onto something.

After all, a move to Cairo would be a shorter trip than the relocation Kroenke’s other major sporting asset has made.

LSU’s Ed Orgeron: ‘Our team’s been on fire all week,’ as injuries, his job status fan dumpster fire