Everton‘s Jordan Pickford is coming under increasing pressure in his bid to keep the England No 1 spot at this summer’s Euros.

Against Crystal Palace on Saturday, Pickford came in for heavy criticism for conceding a very soft goal – allowing Christian Benteke’s harmless strike to creep under his body at Goodison Park.

And following the final whistle on the weekend, Pickford – who became a national hero just 18 months ago for starring at the World Cup for the Three Lions – tore into those who continue to criticise the England stopper’s performances.

‘The press and everybody, the punters — look at Gary Neville,’ Pickford began. ‘They just want to come for England players. Everyone gets stick. That’s part of being an England player. You have to live with it, you’ve got to learn.

‘You just keep it away from your head as the only person who can sort things out is yourself, on the pitch and in training. Every England player gets stick. Some get a lot more praise than others. Look at Joe Hart when he was No 1. He got pelters every week.’

Pickford’s continued with a remarkable assertion: ‘It’s easy to see. Everyone hates you, for some reason. I just get on with it. I know what I’m capable of and I know what I’m good at. Yeah, it hurts.

‘I know I have been good for England. It’s funny because everyone raves about you when you are with England, but then you go back to your club and everyone wants to slate you. I don’t let it affect me. But it does p*** you off.’

The future of England’s No 1 spot heading into the Euros remains uncertain with the likes of Dean Henderson and Nick Pope waiting in the wings to take Pickford’s position.

The pair, especially Sheffield United goalkeeper Henderson – who is on loan from Manchester United – have impressed hugely this season and are coming to the fore at an extremely crucial time ahead of this summer’s tournament.

Here, Sportsmail takes a look at how Pickford compares to his compatriot goalkeepers in the Premier League…

Pickford, who made his England debut in November 2017 during a goalless draw at Wembley against Germany, has played all 26 games for the Toffees – currently enjoying a surge of form under Carlo Ancelotti.

During those 26 top flight encounters, he has conceded 38 times, keeping six clean sheets for the Goodison Park outfit.

The 25-year-old has produced 63 saves overall this season, which equates to 2.4 per match, and has a save percentage of 62.4.

Furthermore, Pickford has made two errors leading to goals so far and has conceded 1.6 more goals than he should have done at this stage of the season.

He was expected to have conceded 34.38 goals at this stage of the season but has in fact let in 36 overall.

However, a major reason why Southgate favours Pickford is his ability to play out from the back and the Everton man is proving him right in this sense.

He has a passing accuracy of 56.29 per cent, which is the best out of every other English goalkeeper in the league. 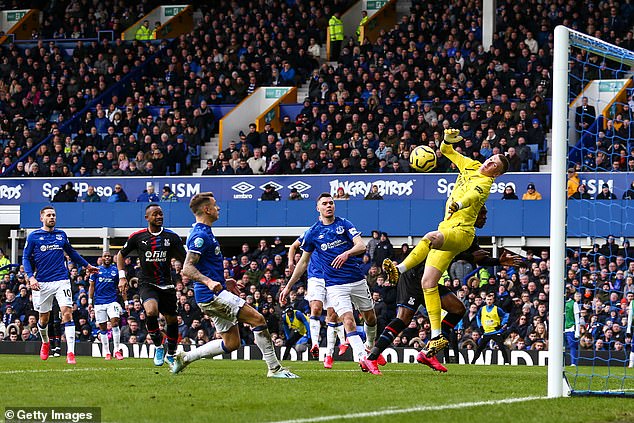 Henderson is applying firm pressure on Pickford for the England No 1 jersey this summer after shining on loan in the Premier League with Sheffield United, who are famously chasing a Champions League spot.

The goalkeeper, who has his sights set on ousting David de Gea as Manchester United’s No 1 in the future, has played an instrumental role in the Blades remarkably sitting just two points adrift of the Champions League places with 12 matches to spare.

Henderson has kept the joint-highest amount of clean sheets in the Premier League with nine from 25 matches. The only game he has sat out this term came against his parent club back in November last year.

The 22-year-old, who made Southgate’s squad for the last international break, has a brilliant save percentage of 75.0, which equates to 2.6 made per match.

What stands out most regarding Henderson’s stats is how many goals he has prevented so far this campaign.

Henderson was expected to have conceded 27.22 goals but he has in fact only let in 21 for Chris Wilder’s high-flying Blades.

The area in which Henderson could do with improving is with the ball at his feet. He has a passing accuracy of just 34.25, which is the lowest out of the seven English goalkeepers in the Premier League. 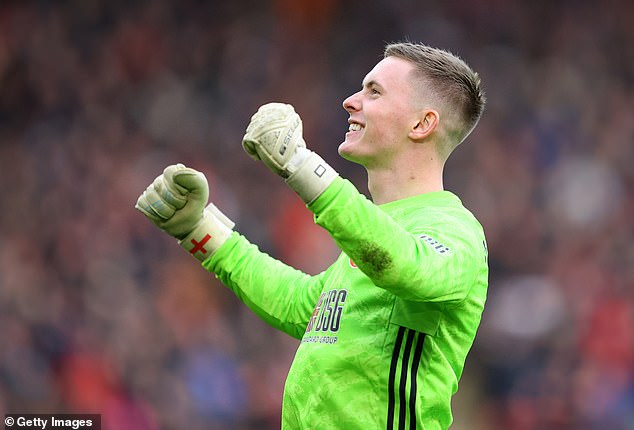 Burnley goalkeeper Pope is expected to also provide competition for both Pickford and Henderson this summer, when England begin their Euro 2020 campaign against Croatia at Wembley on June 14.

Pope has made 79 saves for the Clarets in 25 Premier League matches – working out at 3.2 per game, better than Pickford and Henderson.

The 27-year-old has also shut out Premier League teams nine times so far this season, joint-highest with Henderson but he has conceded 17 times more (38).

And just like Everton shot-stopper Pickford, Pope has produced two errors leading to goals this term while his goals prevented ratio is down.

Pope, who has made two appearances for the Three Lions, has conceded 3.3 more goals than he should have done at this stage of the season.

The Burnley star has shipped 37 (excluding own goals), while he was expected to have conceded just 33.72 overall. 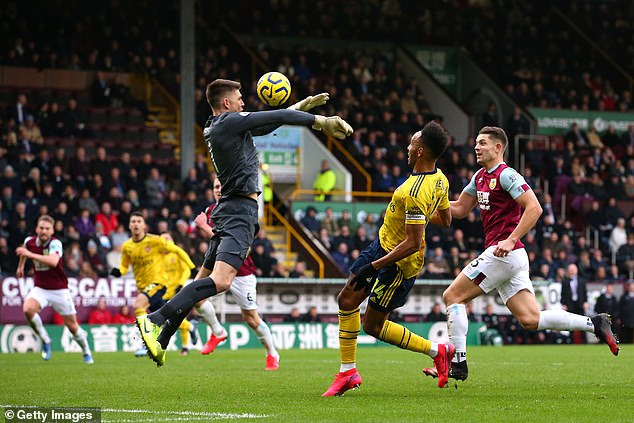 Heaton joined Aston Villa in the summer as he seeked regular playing time after being beaten by Pope for the Burnley No 1 jersey.

But the English goalkeeper has found things tough this season as Villa desperately look to just about beat the drop – they sit 17th, just a point above the Premier League relegation zone.

And to make matters worse, he has been ruled out for the rest of the season after sustaining a serious knee injury during the 2-1 victory at his former club Burnley back on New Year’s Day.

Before his injury, Heaton had conceded 35 goals in just 20 games playing behind a leaky Villa defence which has struggled to deal with the formidable Premier League strike-forces.

Heaton, who made 68 saves during his 20 appearances (3.4 per game), only kept three clean sheets prior to his long-term setback at Turf Moor.

He also holds the worst record in terms of goals prevented. The injury-plagued goalkeeper has shipped 34 strikes (excluding own goals), when he was only expected to concede 28.82. 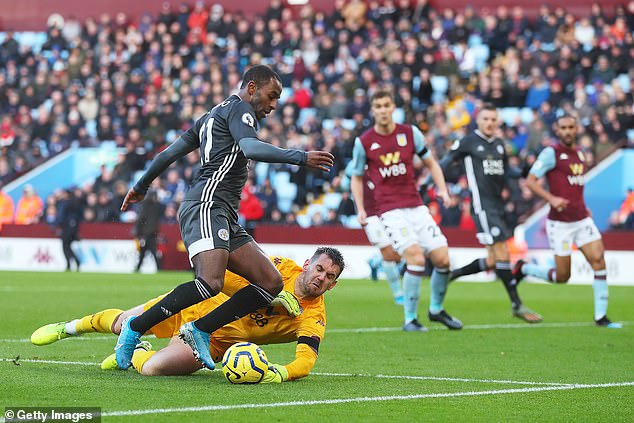 Ramsdale has emerged as a contender for a future spot within the Three Lions squad after taking over in between the sticks for struggling Bournemouth, defeated 2-1 by Henderson’s Sheffield United on Sunday.

Out of his goalkeeping compatriots, the 21-year-old boasts the second highest save percentage ratio (69.9) – making 87 overall from 25 fixtures.

But Ramsdale has shipped a lot – 37 in total in 25 matches as Bournemouth look to steady the ship in their battle to beat the drop come the end of the season.

He has kept just four clean sheets for Eddie Howe’s men, who currently sit 16th in the Premier League – only two points above the dreaded relegation zone with the business end of the season approaching.

However, he has done well on the passing front for Howe’s side, who look to dictate the tempo of the game.

Ramsdale’s passing accuracy is 54.82 per cent, which is only bettered by current England No 1 Pickford. 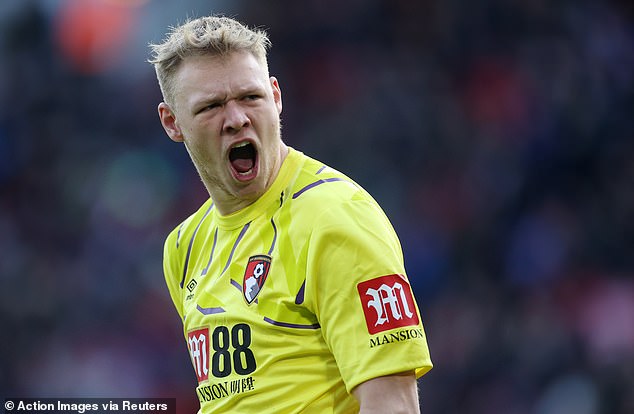 McCarthy has played the least out of the English goalkeepers in the top flight, featuring just 15 times and playing only 1,350 minutes so far this campaign.

McCarthy, whose chances appear slim of earning a spot in Southgate’s travelling squad for the Euros, has a save percentage ratio of 67.2, producing 2.9 per match.

He has kept three clean sheets, conceding 21 times for the St Mary’s outfit – who now sit 13th in the Premier League after their fate looked doomed following their humiliating 9-0 defeat at home to Leicester in October.

Furthermore, McCarthy – who joined Southampton in 2016 – hasn’t made any errors leading to goals, providing a safe pair of hands for the Saints as they look to steer further clear of the relegation zone.

And finally, he has conceded 1.9 goals more than he was expected to at this part of the season. 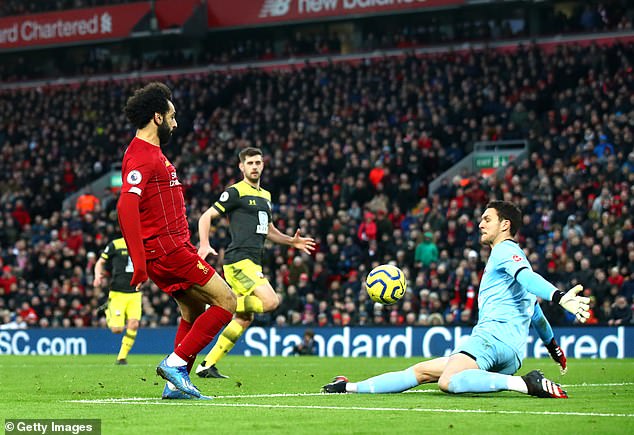 It was a nightmare start to the season for Foster and his Watford team-mates, who seemed destined for relegation before Nigel Pearson took over.

Pearson had revived the Hornets’ fortunes but they are now winless in four Premier League games again. But they have been given a fighting chance, and much of that credit must go down to Foster.

Foster, who has played every single minute for Watford this season, has made a staggering 81 saves, more than any of his English counterparts – which equates to 3.1 per game.

Despite conceding 40 times in just 26 Premier League encounters, he has kept eight clean sheets – the joint-fourth highest in the top flight behind Henderson, Pope and Liverpool goalkeeper Alisson (all with nine).

Most impressively for Foster is his goals prevented ratio this campaign.

Excluding own goals, he has shipped 37 times when he was expected to have conceded 43.89, meaning he has in fact let in 6.9 goals less than he should have. 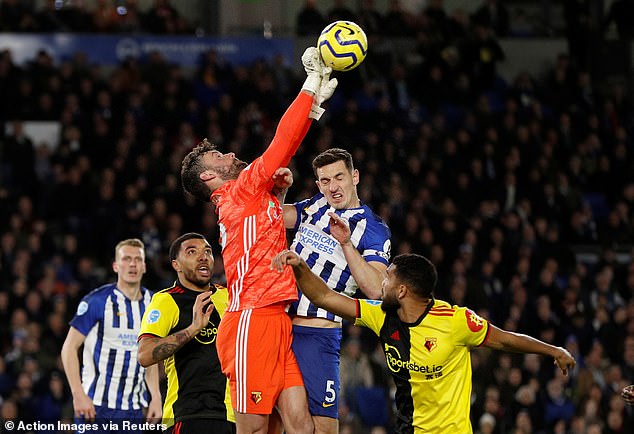 2020 French Open: What to know about women’s singles tournament