Wells Fargo services are DOWN: Bank hit by nationwide outage leaving thousands of customers unable to use app, ATMs, or even their own DEBIT CARDS

The issue started to become apparent in the early hours before spiking at around 8 a.m. (ET); as of around noon, the banking service still isn’t back to full operations.

Outraged customers have reported they cannot access their accounts on the Wells Fargo app or website, use ATMs, or even make purchases with their debit cards. Instead, transactions are being declined. 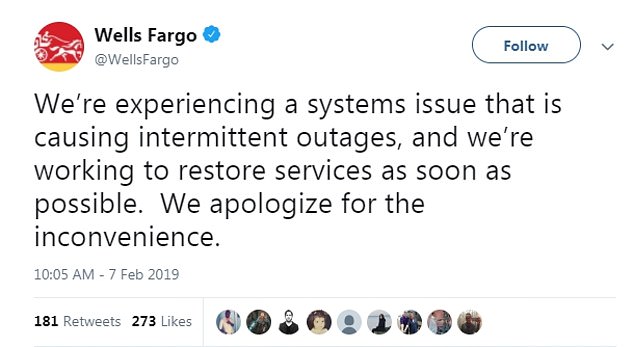 The outage is affecting Wells Fargo customers all around the US, with all of the coastal areas experiencing the heaviest issues.

Customers complained on social media that they could not get into their Wells Fargo accounts online all morning, and some learned the hard way when their cards were declined.

Wells Fargo confirmed the issue on Twitter as the number of panicked customers continues to climb, and assured it’s working to resolve the problem.

‘We apologize to our customers who may be experiencing an issue with our online banking and mobile app,’ Wells Fargo tweeted initially. ‘Thanks for your patience while we research this issue.’ 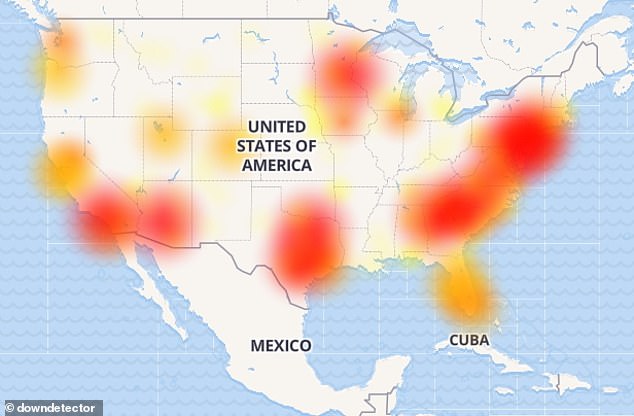 The outage is affecting Wells Fargo customers all around the US, with all of the coastal areas experiencing the heaviest issues

‘We’re experiencing a systems issue that is causing intermittent outages, and we’re working to restore services as soon as possible,’ the firm added in a follow-up tweet.

Many who saw the post, however, were not satisfied with the bank’s response.

Dozens of comments posted beneath the announcement demanded answers and additional information.

Customers noted that they could not even speak with a banker over the phone for their banking needs because they were told bankers can’t access the accounts, either.

‘Thank goodness I don’t need money this morning for anything!’ one Twitter user quipped.

Thursdays outage is the second to hit Wells Fargo in the last week.

Actors lose their sense of self when they are in character,...

Demand for Apple’s iPhone has gone ‘from bad to worse,’ analysts...