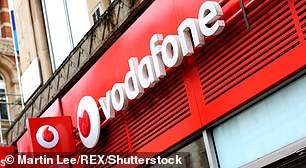 Vodafone has stopped the roll-out of Huawei equipment in its networks around the world amid fears the Chinese company could use it for spying.

As the British mobile giant updated investors on its last three months of trading, which saw revenue slip, chief executive Nick Read said he had decided to ‘pause’ using further Huawei kit in the critical parts of Vodafone’s telephone networks.

The decision was due to the ‘noise’ around Huawei rather than any particular issues, Read said, noting Vodafone had been speaking to governments across Europe about their concerns.

He added: ‘We need to get the facts on the table and make clear what the plan of action should be.’

Firms such as Vodafone have been buying equipment from Huawei as they revamp their 4G networks into faster 5G.

Many countries have pushed to keep Chinese suppliers out of critical parts of their infrastructure, but governments including the US, Australia and New Zealand have gone a step further and banned Huawei from supplying the technology attached to radio towers.

Huawei denies it is involved in spying.

How Do I Keep My Sales Pipeline Full?