More than 40,000 motorists have been prosecuted for driving cars in Britain deemed too dangerous for the road in the last four years, a new study has revealed.

Irresponsible car owners have been caught at the wheel of vehicles with dodgy brakes, bald tyres, defective steering and other dangerous issues that render them unsafe for use.

They were issued fines of up to £2,500 and three penalty points for knowingly driving motors with problems.

Using Driver and Vehicle Licensing Agency figures, the location where most drivers have been prosecuted has been revealed, with London, Birmingham and Liverpool topping the ‘Banger Britain’ table.

Banger Britain: These are the 10 locations with the highest number of prosecuted drivers found at the wheel of vehicles that were deemed unroadworthy

Since 2016, a total of 43,223 drivers have been prosecuted for using cars that are simply unfit for the road, says Select Car Leasing, which collated the data following an FOI request to the DLVA.

That figure is almost certainly much higher as not all 2019 stats have been made available for all offences.

Motorists in London were found to be most willing to risk driving vehicles with serious faults, racking up five times as many prosecutions than anywhere else in England, Scotland and Wales.

A total of 4,526 motorists were pulled over by police in the capital because their cars were unroadworthy.

‘The prosecutions for central London are enormous compared with the rest of Britain. And we suspect that’s not simply due to the larger population.

‘Many London dwellers use their cars infrequently, because public transport is a much more effective method of getting across the city.

‘And if you’re not using your car on a regular basis, it’s much easier for that vehicle to fall into disrepair without you necessarily realising it.’ 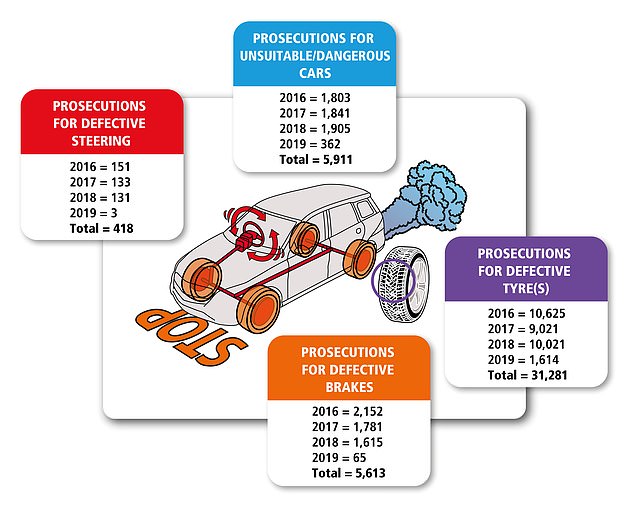 Defective tyres were by far the most common problem, suggesting motorists aren’t replacing their rubber quickly enough. Stats for 2019 are much lower as total figures for the first 7 months of the year are not yet available

Mark Tongue, director at Select Car Leasing said the higher prosecution rate in the capital was partly down to its larger population and the suggestion that Londoners tend to use their cars infrequently and therefore don’t realise when they have fallen into a state of disrepair.

London was found to have the most prosecutions for all four offences reviewed for every year analysed – all of which result in fines and penalty points on an offender’s driving licence.

The city’s worst offence by far is ‘using a vehicle with defective tyres’ – with 3,332 people being slapped with three penalty points, and a fine of up to £2,500 per tyre.

And it’s also the most common offence among the four in Britain. 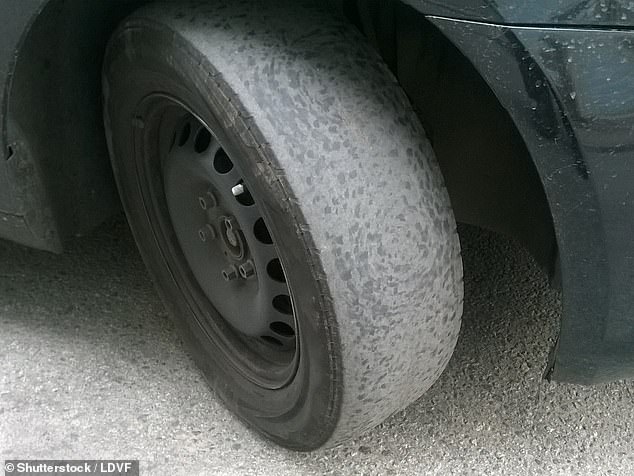 If you’re found at the wheel of a car with illegal tyres you can receive a fine of up to £2,500 per tyre and 3 points on your licence 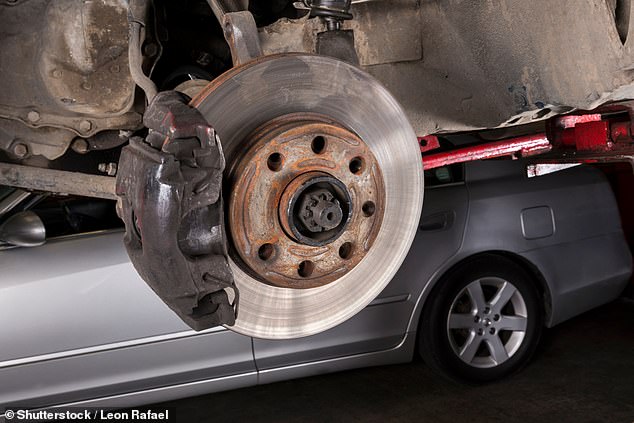 The figures show there are more than 10,000 prosecutions for this offence alone each year, suggesting drivers are not replacing rubber quickly enough or are fitting unsafe tyres.

The latter could be related to the number of second-hand car tyre retailers that have been found to sell dangerous rubber in recent months.

An investigation carried out by 10 councils across Yorkshire and the Humber under the guidance of the Local Government Association earlier this year found that nearly half (45 per cent) of 29 used tyres examined that were being sold by retailers were unsafe.

An undercover investigation by TyreSafe and Trading Standards last October also found that 99 per cent of second-hand tyre firms were selling dangerous products. 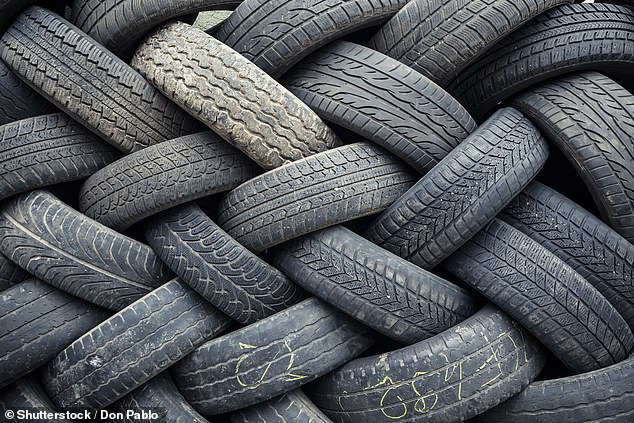 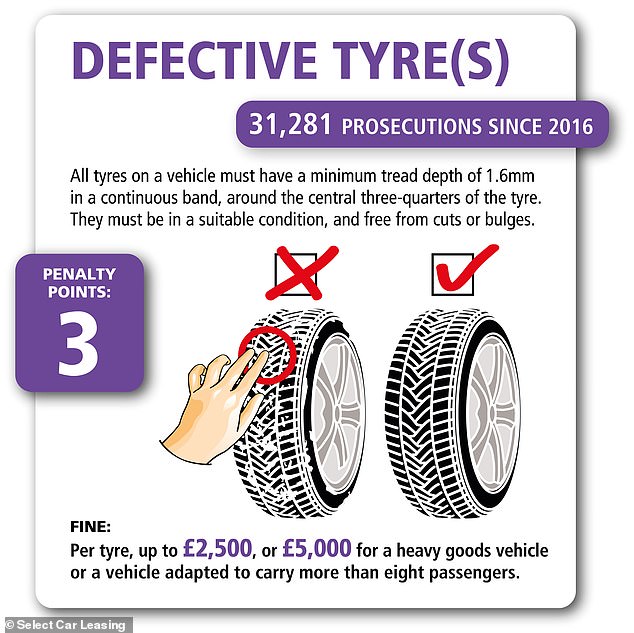 Mr Tongue said it was ‘shocking’ to see how many drivers are willing to let their vehicles fall into a dangerous state and continue to use them.

‘A vehicle which has defective steering, brakes or tyres, or one that’s in a dangerous condition overall, is one that a driver is not truly in control of, and which could lead to a serious accident,’ he said.

‘Keeping your motor in shape isn’t just about making sure you have a valid MOT.

‘It needs to be serviced and maintained regularly, because if it won’t stop or turn as you want it to, it’s simply a weapon on wheels.’ 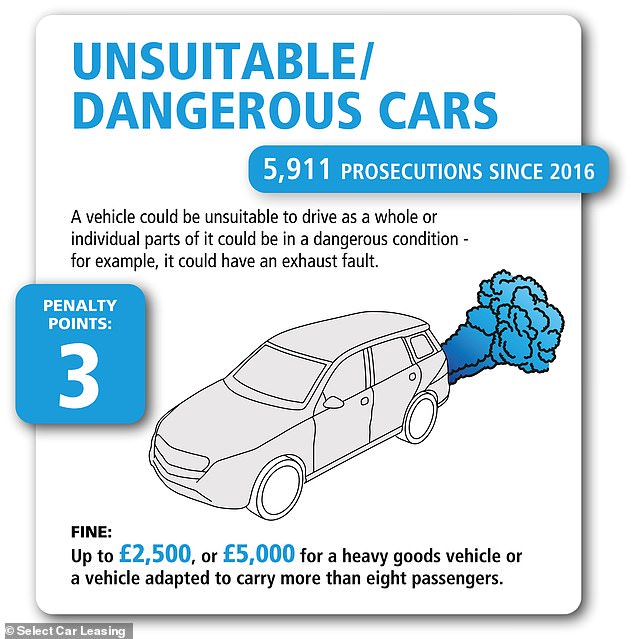 While in lesser cases, such as a car having a broken brake light, the police will issue a ‘vehicle defect rectification notice’ and the owner needs to five evidence that the issue has been fixed within 14 days, these more dangerous cases can have serious ramifications.

Not only will drivers be fined – up to £2,500 for passenger cars and £5,000 for heavy goods vehicles – and receive three points but they are also likely to have their cars seized if they are considered too lethal for the road.

The charges are set by government, not the police, and vary depending on the weight and condition of the vehicle. 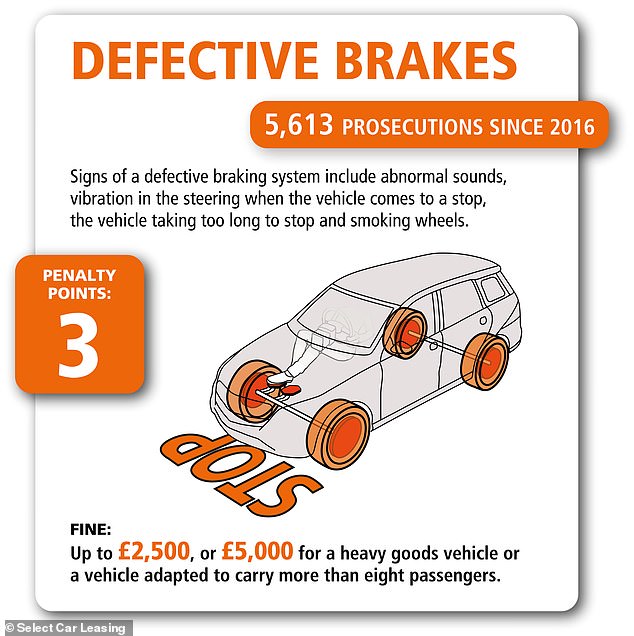 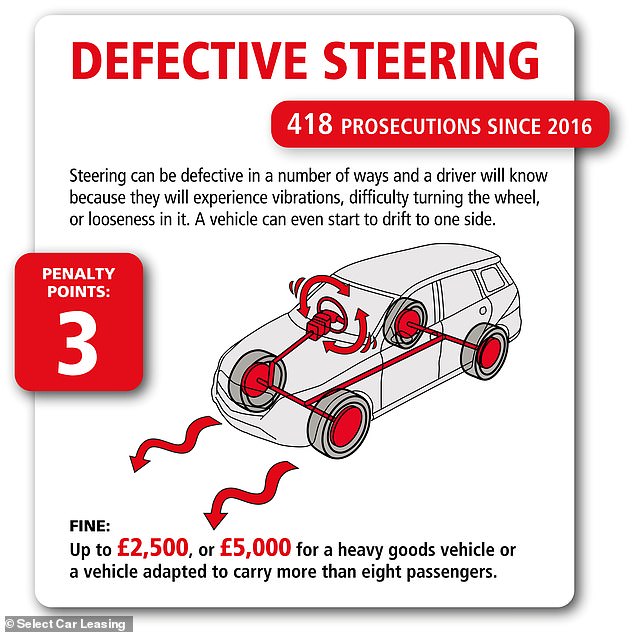 Lightning strike with 3 quick goals, hang on to win Game...