Two turtles have been released back into the wild after one contracted a near-deadly infection caused by consuming plastic.

The pair were rescued after they had tangled themselves in a fishing net nearly three months ago in Argentina waters.

They were brought to Mundo Marino Educational Park, an aquarium, where they spent nearly three months in rehab.

Analysis found that one of the turtles was defecating plastic and revealed an abscess blocking its nostrils, which left untreated could have been fatal.

It’s believed the reptile ingested either a plastic bag or another plastic item thinking it was a  natural food sources.

Veterinary surgeons had to manually unclog the animal’s nostrils and give it antibiotics for the infection, believed to have been caused by consuming the plastic.

The second turtle who was rescued at the same time was found to be healthy after undergoing clinical observation and analysing its blood samples and faecal matter.

The team released the two turtles back into the sea, they spent over two months in rehab at the Mundo Marino Foundation, by whom they were rescued from being tangled in a fishing net. One contracted a near-deadly infection caused by consuming plastic

Without the treatment, the animal would have died due to the severity of the infection and made it easier for other sea creatures to prey on it.

The foundation is warning about how plastic consumption and disposal is destroying the sea’s ecosystem.

Hiram Toro, 37, operational coordinator of the veterinary team said: ‘At the time of admission, one of the turtles defecated nylon, a type of plastic that usually appears in supermarket bags.

‘In addition, the turtle that defecated nylon and presented an infection in its nostrils.

The vets gave him an intramuscular antibiotic and manually extracted the abscess that blocked his nasal passages. 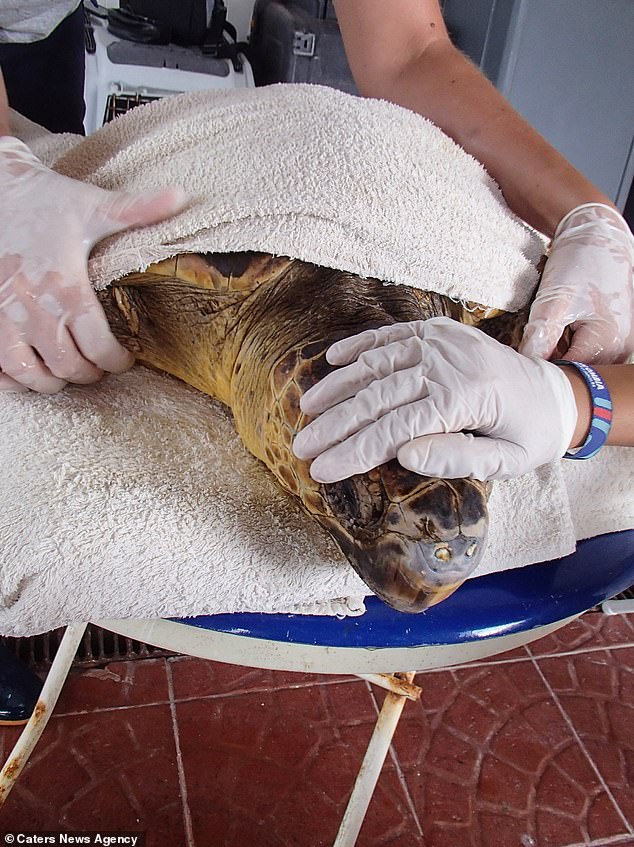 After one of the turtles started to defecate plastic, further analyses revealed an abscess blocking its nostrils, which if left untreated could have been fatal. It’s believed the reptile confused natural food sources including jellyfish or gelatinous fauna, with a plastic item 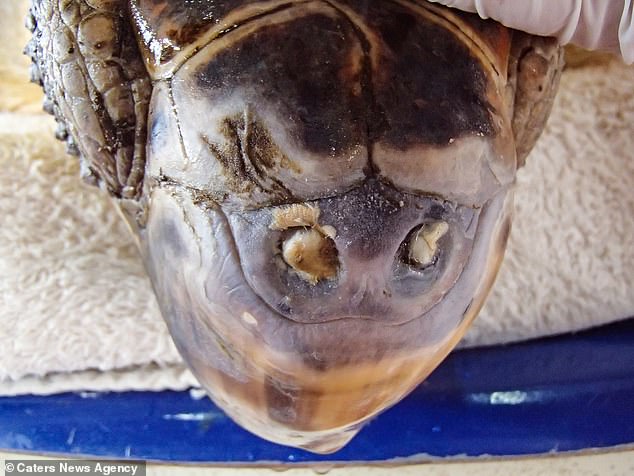 It took more than six ten-minute sessions to remove the gunk from the turtles nostrils, which was the result of an deadly infection from eating plastics. Here, the team remove the gunk manually and also treated the turtle with intramuscular antibiotics 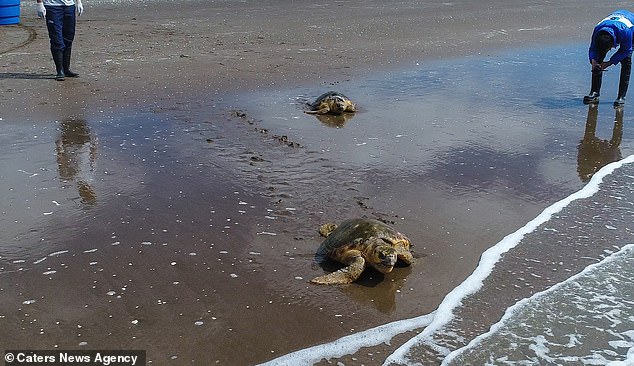 It’s believed the reptile confused natural food sources including jellyfish or gelatinous fauna, with either a plastic bag or another plastic item. The infection, which was caused by consuming the non-degradable waste, required antibiotics

‘Because the airways were obstructed by infection, that turtle had a lower capacity for breathing and diving,’ the Mr Toro said.

‘This would make it less competitive in the search for food in relation to other reptiles of their species.

‘Another sign of the consumption of plastic was that the turtle entered without an appetite.

‘This can be caused by the false sensation of satiety generated by the intake of non-nutritive elements – in this case, plastic – that occupies space in the digestive tract.’

As well as providing intramuscular antibiotics, the team performed six sub-ten-minute sessions to clean and remove gunk and pressure from the nostrils.

While the team were glad to see the turtles released this week, they expressed concern about the growing amount of plastic pollution in the ocean.

They believe 97 per cent of turtles helped by the foundation have consumed plastic, and so far this year 10 out of 16 rescued were found to have non-natural items in their digestive system. 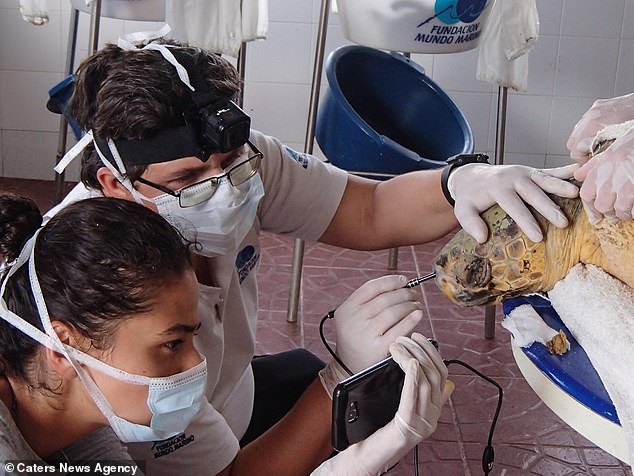 After the animal recovered and was released back into the wild last week, the organisation is warning about how plastic consumption and disposal is destroying the sea’s ecosystem. 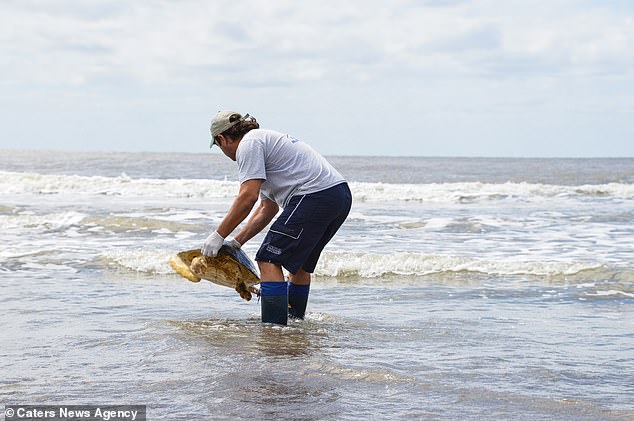 The organisation is warning about how plastic consumption and disposal is destroying the sea’s ecosystem. While the team were glad to see the turtles released this week, they expressed concern about the growing amount of plastic pollution in the ocean

WHAT ARE THE LATEST PREDICTIONS FOR THE FUTURE IMPACT OF OCEAN WASTE?

The amount of plastic in the oceans is expected to triple in just ten years, a report issued by the UK government in March 2018 warned.

This key environmental problem risks being ‘out of sight, out of mind’ with more known about the surface of Mars and the Moon than the deep sea bed, it added.

Our oceans store carbon dioxide and heat while producing oxygen and food, the Foresight Future of the Sea Report stressed.

On the growing blight of plastic pollution, the document warned this will leave a physical presence, accumulating on coasts or in particular areas of ocean.

The report also warned plastic litter on coasts can increase the risk of dangerous bacteria in the water, such as E.coli.

It said efforts to reduce plastic pollution should focus on stopping it entering the sea, developing new biodegradable materials and public awareness campaigns.

Look up AGAIN: Jupiter and Venus to put on astronomical show...

Dissolving tabs could banish plastic bottles from our cupboards forever