Two parasitic wasp species have been discovered hovering around more than 11,000 feet above sea level in Tibet

Chinese researchers have found two previously unknown species of parasitic wasps in a swarm hovering 11,000 feet (3,400m) above the sea in Tibet.

The two species look very similar to each other because they belonged to the same genus (Microplitis), according to the researchers.

Specimens of the wasps were kept in the Institute of Beneficial Insects at the Fujian Agriculture and Forestry University (FAFU) in China after being collected in 2013.

They inhabit prairies and bushes and fly at an unusual altitude for wasps of this genus but are different from any other within the subfamily, called Microgastrinae.

The latter group comprises tiny, mostly black or brown wasps that develop in the larvae of specific moths or butterflies.

Parasitic wasps lay eggs onto other animals, which their larvae then feed on. In many cases, the hosts are still alive when their insides are being eaten.

Interestingly, once parasitised, the host continues living and does not even terminate its own growth.

Researchers found that it was only killed when the wasp eggs hatch and feed on its organs and body fluids before spinning cocoons. 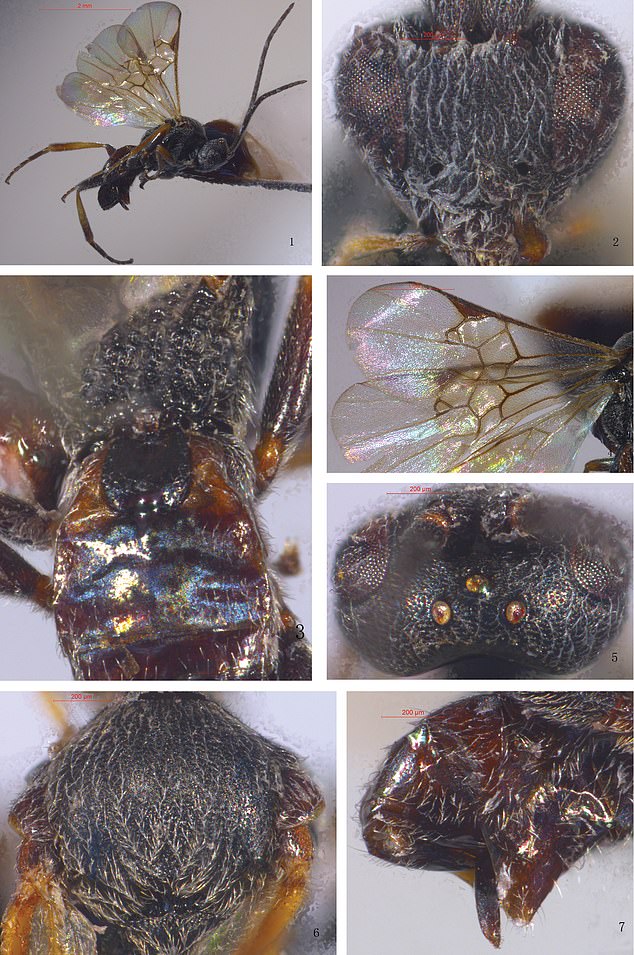 Due to their parasitism, some of these parasitic wasps are considered important pest biocontrol agents.

There are with 190 species of parasitic wasp known from all over the world, of which 37 species have been reported from China.

Almost every insect pest species has at least one wasp species that preys upon it or parasitizes it.

Parasitic wasps pose no danger to humans; few species are able to sting and they do so only when mishandled. They are found throughout North America.

The research was published in the journal Zoo Keys.

WHAT IS A PARASITOID?

Parasitoids are insects with parasitic larvae that eat their host – usually another insect – from the inside out.

They often employ a sharp tool known as an ovipositor to deposit eggs under the skin or exoskeleton of unsuspecting hosts.

After a short gestational period, the larvae hatch and begin consuming their host, normally reaching adulthood when the host has died.

Parasitoid species are mostly types of bee, wasp and ant, though some species of fly also employ the gruesome technique.

The biology of parasitoids has inspired several science fiction authors and scriptwriters to create parasitoidal aliens that kill human hosts, including the infamous Xenomorph in Ridley Scott’s 1979 film ‘Alien’.

Parasitoids are insects with parasitic larvae that eat their host – usually another inset – from the inside out. Pictured is a parasitic wasp that injects larvae into spiders and then sews the host into its nest to pin it down

Musician in relationship with ‘African Kim Kardashian’ to run for president

HEALTH NOTES: The speaking specs that give blind people ‘sight’

How men in Spain were almost completely wiped out between 4,500...