The proportion of liver transplants performed on patients with alcohol-related disease has climbed by 50 percent in the last 15 years, a new study reveals.

In the past, if someone’s liver problems were linked to heavy drinking, they might not have even been considered for a liver transplant.

Later, the National Institutes of Health (NIH) required that prospective liver transplant recipients to abstain from having a drink for six months prior to the procedure.

But, in 2011, that guideline was dropped, and alcohol-related liver disease is now the top reason that a transplant is performed, according to a new study by University of California, San Francisco researchers.

Heavy and risky drinking are on the rise in the US, and there are over 10,000 patients waiting for a liver transplant at any given time, raising questions over who should be rushed to the top of the list, and why. 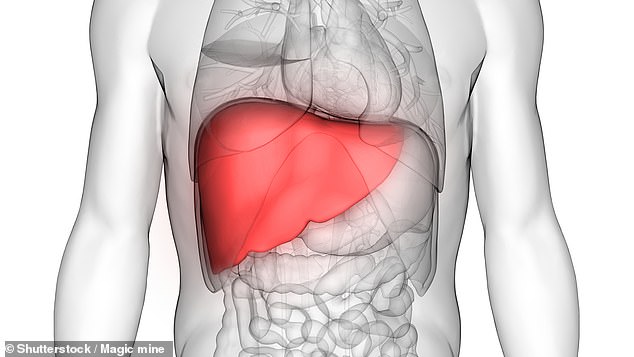 Alcohol-related liver disease is now the number one reason that a US patient receives a liver transplant, new University of California, San Francisco study found

There are many reasons a liver may go into failure, but a transplant is the best hope for survival in any case.

Livers are the second most transplanted organs, outpaced only by kidneys.

Each year, over 100,000 transplants are performed on people who will die of chronic scarring, hepatitis, alcoholic or non-alcoholic liver disease, genetic defects or bile ducts problems without new livers.

But the demographics of the people who actually make it to the top of the wait list have changed, and so have the long term outlooks for them.

Researchers at the University of California, San Francisco, followed a group of nearly 33,000 people who received liver transplants between 2002 and 20016.

But, over time, rates of alcohol-associated liver disease (ALD) have increased as rates of hepatitis have fallen and the result is that 36.7 percent of all transplants performed are for ALD patients.

Alcoholism, however, has long carried a stigma, and a disease that had developed as a result of something long-considered ‘self-inflicted’ was often a reason to turn away patients and give organs instead to children with biliary artesia or adults with genetic defects.

From a medical standpoint, doctors believed that patients with a history of alcoholism would have sustained damage and might ‘waste’ a new organ if they continued to drink after a transplant.

As a sort of concession, beginning in the 1980s, people with ALD were allowed on the transplant waiting list, but only if they proved their worth, so to speak, by abstaining from drinking for six months prior.

But in 2011, a French and Beligian trial changed that.

The researchers showed that post-transplant survival odds for people with alcohol related liver disease were good, so long as the procedure was done early.

In the US, a second study confirmed those findings, and the NIH dropped its six-month abstinence guideline – though, of course, doctors and transplant centers are given the discretion to choose to apply the six month period if they want.

Since then, the number of people receiving transplants for alcohol-related liver disease has shot up.

The new study, published in JAMA Internal Medicine, found the odds of survival were about as good for patients with alcohol-related disease as they were for those whose transplants had nothing to do with drinking.

But, 11 percent fewer transplant recipients whose livers were damaged by alcohol survived for five -10 years, a statistic that could cast doubt on the disposal of the six-month sobriety rule.

‘Before concluding that an increase in late deaths due to relapse is reason to return to an arbitrary requirement for abstinence or to reduce the number of transplantations performed for ALD,we should consider other options to improve outcomes that also meet expectations of beneficence and maximize overall good,’ wrote Dr Mack Mitchell and Dr Willis Maddrey in a commentary accompanying the study.

They note that cancer and infection are common killers for people with ALD and suggest that before jumping to conclusions that continued drinking is making the difference in their survival times, we should improve screenings for other diseases.

Furthermore, they suggest, dealing with alcoholism and alcohol-related liver disease and keeping up a healthy lifestyle ‘requires lifetime attention to the underlying alcohol use disorder.’

In other words, despite the new study’s findings, Dr Mitchell and Dr Maddrey suggest it indicates that people who struggle with alcoholism should receive more, better and longer care, not that they should be required to be abstinent for an arbitrary amount of time to be transplant-eligible.

How to play Fox Super 6 for the NFC Championship

Warning labels for cancerous chemicals in suncream could be ‘watered down’

Hawaii could become the first state to BAN cigarette sales