A new study warns that toxic chemicals stemming from blue green algae has been found in dead dolphins and could be linked to a degenerative brain condition likened to Alzheimer’s.

In the paper, researchers say detectable amounts of the toxin BMAA — found in harmful algal blooms — was observed for the first time in the brains and bodies of 13 of the 14 dolphins studied.

Along with that observation, the paper says symptoms and conditions similar to the effects of Alzheimer’s and Parkinson’s Disease were also detected.

Adverse effects in dolphins could be harbinger to increased algae-born toxins in our oceans and waterways.

WHAT ARE THE RISKS OF ALGAE BLOOMS?

Technically called cyanobacteria, the ancient class of organisms that create the blooms are present nearly everywhere water is found, but thrive in warm, still bodies like lakes and ponds.

They also create a unique class of toxins, the impact of which on humans is only partly understood.

Long linked to animal deaths, high doses of the toxins in humans can cause liver damage and attack the nervous system.

In the largest outbreaks, hundreds have been sickened by blooms in reservoirs and lakes, and officials in some areas now routinely close bodies of water used for recreation and post warnings when blooms occur.

But less is known about exposure at lower doses, especially over the long term.

Small studies have linked exposure to liver cancer – one toxin is classified as a carcinogen, and others have pointed to potential links to neurodegenerative disease.

While the new paper, published to the journal Plos One, suggests that the link between the toxin and the adverse cognitive effects warrants further study, scientists have taken the evidence as an opportunity to warn of the potential fallout from increasingly common algal blooms on humans.

‘Not to be too political, but it goes to show the health of marine animals and water quality,’ David Davis, lead author and a University of Miami Miller School of Medicine neuropathologist told the Miami Hearld in a report.

In particular a combination of saltier water, more carbon dioxide, and changes in the amount of rainfall fueled by climate change could all create the ideal conditions for more blooms, according to the EPA.

Most notably, the city of Cleveland has been the subject of several harmful blooms throughout the last several years, prompting the Ohio governor to take official action.

Just how those blooms will affect humans, however, remains to be seen. 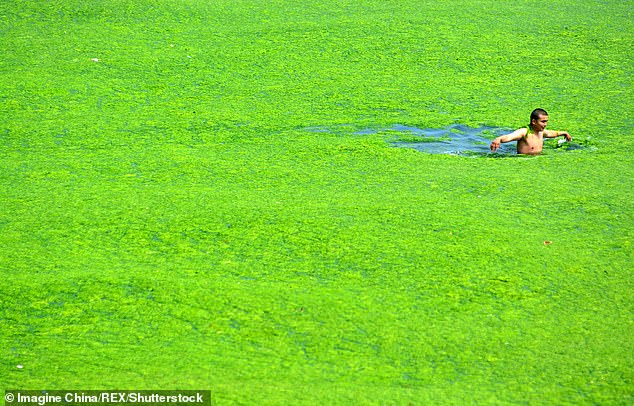 A 2011 report from Discover Magazine, highlights researchers from around the world who began to discover linkages between the consumption of seafood containing BMAA and degenerative brain conditions in patients.

Other research from the National Oceanic and Atmospheric Administration (NOAA) has already found that Dolphins are introduced to the toxin through their food source.

To help establish the link and further the science of BMAA and its linkages to Alzheimer’s researchers are in the midst of conducting a larger and much more definitive study involving 150 dolphins that died in the Gulf Coast during alge blooms last year, according the the Miami Herald.

NASA is working on a Transformer-style PLANE