Tottenham have been handed a potential huge injury blow ahead of their Carabao Cup final against Manchester City after Harry Kane picked up an injury against Everton.

The striker walked off the pitch at Goodison Park after colliding with Toffees’ attacker Richarlison while defending an Everton corner in stoppage time of their 2-2 draw in the Premier League.

Kane was seen holding his right ankle while squatted on the floor before being substituted in a moment that will leave Spurs fans worried ahead of next weekend’s final. 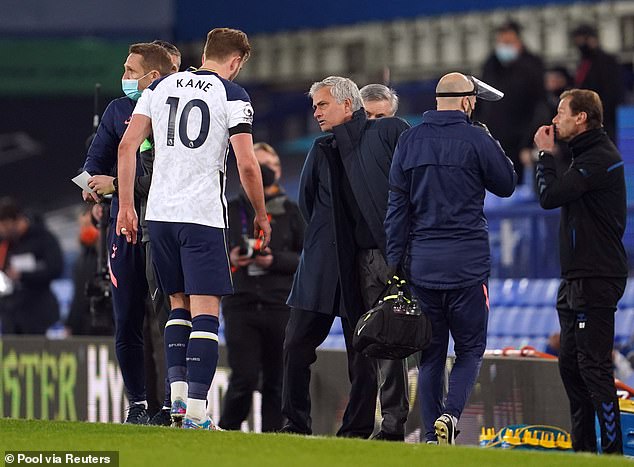 Tottenham manager Jose Mourinho Sky Sports: ‘It is too early to say,’ when asked about the extent of the striker’s injury.

‘For him to leave the pitch with a couple minutes to go is because he felt something. Let me be optimistic and believe that he has time to recover. Let’s see.

‘Let me be optimistic and believe it is nothing serious. It is obvious he is very important for us, I cannot say much. I cannot speculate.’

The England captain has struggled with ankle problems throughout the season, after picking up problems with both his left and right ankle back in January.

He made a quick return, missing just two matches despite being tipped to be out for over a month at the time of the injury. 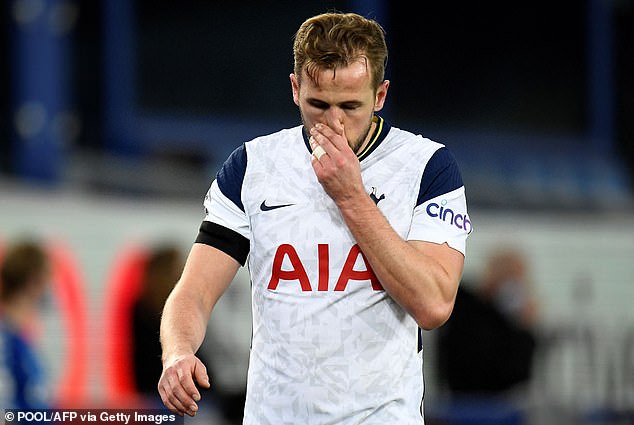 Spurs defender Eric Dier revealed that he was left worried after watching their talisman leave the pitch during stoppage time.

‘Yeah obviously it is always a worry when you see him limping because he doesn’t fall over easily.

‘He takes a lot of knocks and gets on with it but it is obviously early days to say how bad it is.

Tottenham’s draw with Carlo Ancelotti’s side was another setback in their pursuit of a top four finish in the Premier League this season.

Spurs are five points behind fourth-placed West Ham and have played an extra match than the Hammers, as they prepare for a midweek tie with Southampton before the Carabao Cup final. 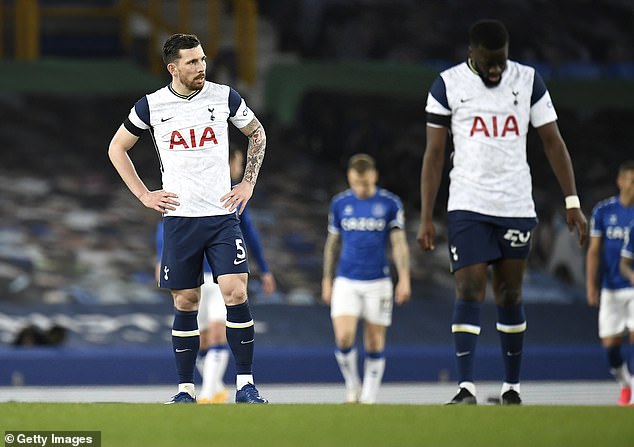 Talking after the match, Sky Sports pundit Jamie Redknapp urged Kane to remain on the side of caution if he is left in limbo ahead of the cup final.

‘Absolutely and certainly for Harry,’ he replied when asked about the potential extent the injury could have on Spurs’ season.

‘He has a cup final nine days away, it looks innocuous but they are sometimes the worse ones. He has had ankle problems, he did it against Liverpool, missed two games, that was his left and his right.

‘There will be pressure from the manager to play and he will want to play himself, he is that kind of boy. He is very tough. Very rare do you see Kane go down with injuries but you have to be careful for your long-term wellbeing.

‘All the talk will be he can inject it, sure he will have the option in training this week, get as much blood flowing to that area and see how he feels for nine days.

‘I feel so sorry for him, I have done it before, I have had ankle inures, they are a nightmare and you have to get it right.’

Woman rehearses own funeral with friends pretending to cry around her...