By Alex Bowmer For Mailonline

It is the most tangible souvenir that many FA Cup underdogs have – the shirts of their illustrious opponents.

Up until March last year, no player would have given a second thought to exchanging this most obvious of mementos.

However, Covid-19 has put a halt to this longstanding tradition for now – but Tottenham were one step ahead of the game.

Two of the players who started for Neil Young’s men, Mike Howard and Josh Hmami, took to Twitter to reveal the shirts they had been given.

Howard, who joined the club from Morecambe on a free transfer in July after spending part of last season on loan at Marine, posted a snap of him holding up Harry Kane’s shirt.

‘Wow, what an experience that was making it to the third round of the FA Cup and having the chance to play against world-class internationals,’ he said. ‘It’s been a journey I’ll never forget! Nice little Harry Kane shirt for the collection.’

Team-mate Hmami, who joined Marine from Welsh side The New Saints last June, managed to get hold of Sergio Reguilon’s jersey, tweeting: ‘Unbelievable experience! You really don’t realise how good these players are until you play them yourself.

‘A moment that will stay with me for life. Proud of all these lads. Any chance of Sergio Reguilon signing this shirt for me as well?’

The biggest mismatch in FA Cup history saw 161 league places separate the two sides, but it was Marine who almost got their noses in front when Neil Kengni’s strike from 35 yards cannoned off the crossbar.

The hosts kept their expensively assembled visitors at bay for the best part of 24 minutes, but a devastating 13-minute spell saw centre forward Carlos Vinicius bag his first hat-trick, while Lucas Moura also struck with a superb free-kick. 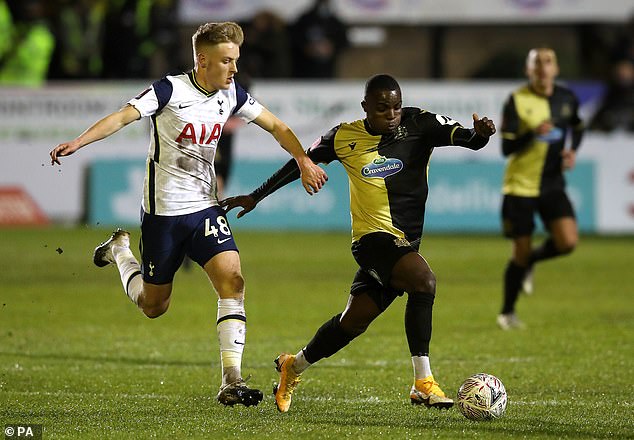 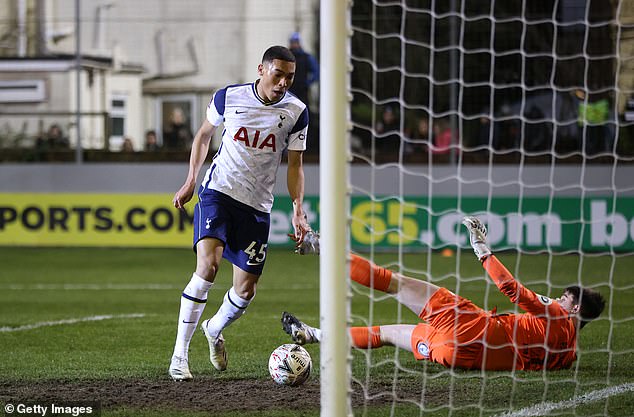 To Marine’s immense credit, Spurs only added one more goal to their tally after the break thanks to 16-year-old Alfie Devine, who became the club’s youngest-ever goalscorer in the process.

However, the result will be of secondary importance to the Northern Premier League Division One North West side, who showcased their talents on a global stage and got the chance to pit their wits against some of the best players in the Premier League after knocking out League Two Colchester and National League South side Havant & Waterlooville in the previous two rounds.

Marine also managed to sell 30,697 virtual tickets, sold at £10 each, to recoup the money lost in ticket sales when the game went behind closed doors. They have more than done that. 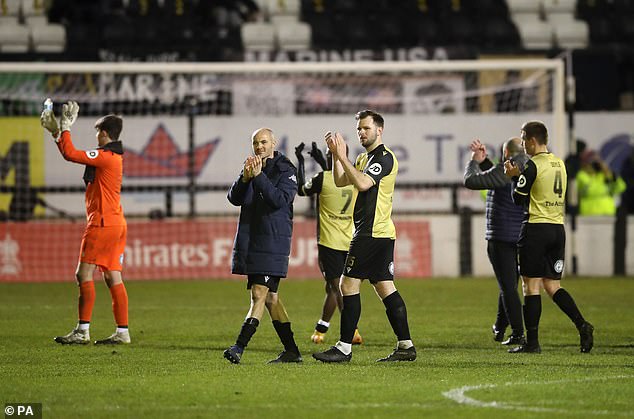