Storybook romance: Tinder launching an ‘Apocalyptic’ choose-your-own-adventure series that matches people based on their decisions

Swiping is no longer the only way to find matches on Tinder.

In a choose-your-own-adventure style series set to be rolled out next month, users will be able to match with other dating hopefuls by clicking their way through an interactive narrative.

‘Swipe Night,’ as Tinder is calling it, will air on October 6 and is designed to match users based on the choices they make during a short ”first-person apocalyptic adventure.’

All of the episodes will be ‘live’, so-to-speak, with each being available for viewing only between the hours of 6 pm and midnight during a respective users’ local time.

The series will consist of short five-minute videos during which users are periodically given seven seconds to choose what happens next.

Once the ‘adventure’ is completed, users will be matched together depending on which ‘moral’ and ‘practical’ choices they made.

Once matched, users will also be able to see a list of each other’s decisions that the company hopes will act as a kind of conversation-starter.

‘Seven years ago, Tinder revolutionized the way we meet with the invention of its Swipe feature,’ said CEO Elie Seidman in a statement.

‘Now, with Swipe Night, we’re proud to be pushing the envelope again, by letting people connect in ways they can’t anywhere else.’

According to the company, Swipe Night will be directed by 23-year-old Karena Evans, who has worked on several music videos for the rapper, Drake, and will feature actors from movies like Inherent Vice and Chinatown Horror Story.

Tinder is explicit about its desire to gear Swipe Night around Gen Z audiences (those ages 18 to 25-year-old) and hopes that the format will superior experience over simply swiping through the app’s characteristic card-style cue. 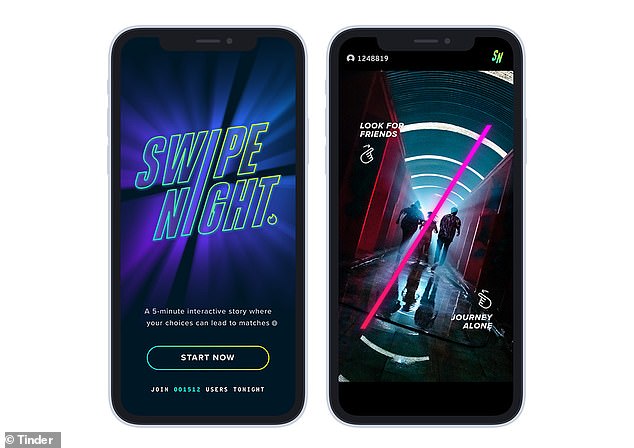 ‘More than half of Tinder members are Gen Z, and we want to meet the needs of our ever-evolving community,’ said Ravi Mehta, Tinder’s Chief Product Officer.

‘We know Gen Z speaks in content, so we intentionally built an experience that is native to how they interact. Dating is all about connection and conversation, and Swipe Night felt like a way to take that to the next level.’

This isn’t the first attempt to diversify the company’s range of services.

In May, the dating app launched ‘Festival Mode,’ which lets users connect with others who are attending the same festivals in the U.S., U.K. and Australia, including Electric Daisy Carnival, Bonnaroo, All Points East and Parklife.

Festival Mode operates similarly to Spring Break Mode, launched earlier this year, by letting users attach a unique badge to their profile that indicates which music festival they’re heading to.

Culver the sea eagle has returned home to the Isle of...