Tinder will no longer rely on a controversial method of sorting users based on an internal ‘desirability’ score, according to a recent announcement from the company.

Instead, the popular dating app’s new algorithm will prioritize its patrons based on one overarching factor: volume of usage.

The hidden ranking system that Tinder previously relied on assigned scores to users based on how many people have liked their profile.

Tinder will no longer rely on a controversial method of sorting users based on an internal ‘desirability’ score, according to a recent announcement from the company. According to the company, Tinder has matched 30 billion users around the world. File photo

‘The most important factor that can help you improve your match potential on Tinder is using the app,’ said the company in a statement.

‘We prioritize potential matches who are active, and active at the same time.

‘We don’t want to waste your time showing you profiles of inactive users. We want you chatting and meeting IRL.’

In its statement about the algorithmic shake up, the company described the idea of using an Elo score, which places users in its shuffle based on how many people have liked or passed on their profile, among other things, as ‘old news.’

‘Elo is old news at Tinder,’ said the company. ‘It’s an outdated measure and our cutting-edge technology no longer relies on it.’

Since the system was first revealed in 2016, Tinder’s deployment of Elo has caught the attention of users and media for being both opaque — just what factors went into determining the score were unclear — and at times, superficial.

The company did not disclose scores to users, and according to a report by Fast Company, who first reported details regarding the system in a profile of Tinder’s CEO, Sean Rad, even if they did, some things may be better left unknown.

While the post has made it clear that none of Tinder’s algorithms, whether old or new, sort users based on skin color, income, or any other demographic feature, the app will continue to use aspects of the Elo system its current software. 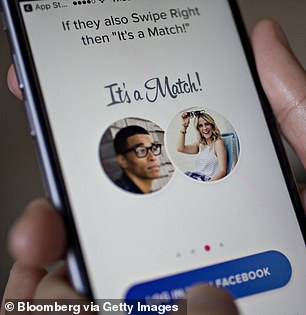 ‘Today, we don’t rely on Elo — though it is still important for us to consider both parties who Like profiles to form a match,’ said the company.

In its statement, the company offered little detail on just how and when profile up or down votes will factor in, but according to the post, as far as Tinder is concerned, the algorithm’s history of mystery has ended.

‘That’s all, folks, the case has been solved: Tinder matches you, using your recent activity, your preferences and your location, available in 190 countries,’ reads the statement. ‘So, jump on the app and send some Likes. Case closed.’

Deadly disease that turns deer into ZOMBIES has spread to 26...