Thousands of heated performance socks have been recalled over fears they might burn people and cause fires.

The Mobile Warming Performance Heated Socks are designed for fitness buffs so they can keep warm while participating in outdoor activities in the winter.

But Tech Gear 5.7 says the lithium-ion battery in the socks can overheat, melt or ignite if it’s charged with a charger other than the one provided.

The company has received four reports of batteries overheating, melting or igniting. In two instances, there was minor property damage and, in the other instances, the battery case melted.

However, no injuries have been reported from the 4,000 recalled units, according to a press release from the US Consumer Product Safety Commission (CPSC). 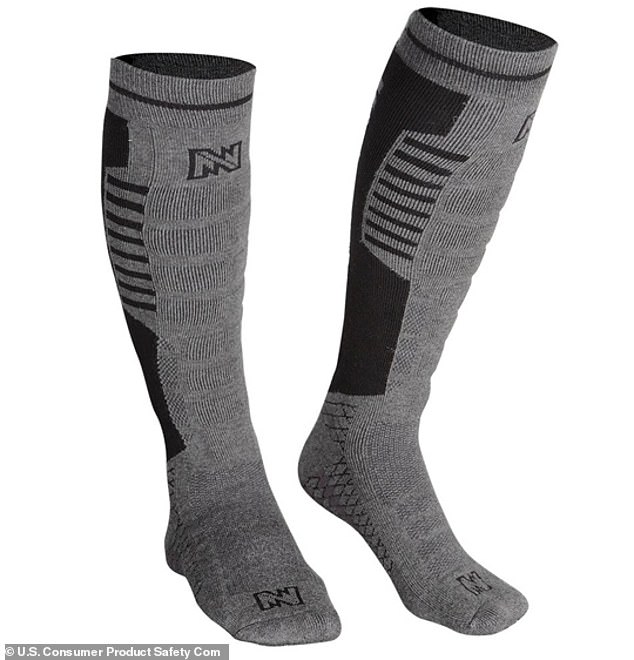 Normally, insulation traps body heat – but if a person gets wet or stops moving around, they may not stay warm.

Heated clothing, however, can keep a user warm even if they’re wet or resting.

The socks heat up when a battery is connected and is in the on position, which is controlled by a switch or via a smartphone app.

The company says the socks can keep feet warm for up to 11 hours and heat up to as high as 135F.

The recalled units were sold between September 2018 and November 2018.

Stores and websites that sold the socks include Mobilewarming.com. Scheels, Amazon with a price of about $130.

Customers are asked to immediately stop using the socks and contact Tech Gear at 1-888-908-6024 during business hours.

The company says that consumers will either receive a free replacement pair of socks with battery or a full refund.

This is not the first time that electrical heated clothing has been recalled due to fire or burn hazards.

In 2013, the CPSC issued a recall of Gerbings and Harley-Davidson heated jacket liners after a defective wire connector caused some of the jacket liners to overheat and burn users.

That same year, Columbia recalled some Omni-Heat electric jacket models due to a manufacturing flaw in the heated inner wrist cuff which was a potential burn risk.

A new swathe of vital antifungal drugs have stopped working