When pensioner Jane Snowball took part in a trial 35 years ago to order groceries using her television remote control, little did she realise she effectively became Britain’s first online shopper.

Last year, internet grocery shopping was worth £12.6 billion, but many elderly people are missing out on this retail revolution, due to high minimum spends and expensive delivery charges.

Today, online ordering is a speedy process carried out on smartphones, tablets and laptops. There are even self-driving cool boxes that can deliver groceries.

Frustrating: Delivery charges can be high for someone who lives alone

But retailers are targeting higher spending households such as families, with customers typically required to spend between £25 and £60 to qualify for home delivery. It is a high bar for a pensioner living alone – and on a tight budget – to reach.

Even providers not demanding a minimum basket spend still charge sizeable delivery fees, presenting another barrier for elderly shoppers. Costs vary depending on time of delivery, with pricing structures bewildering to understand even for experienced online customers.

Most supermarkets offer delivery subscription packages for regular shoppers, but these can still prove expensive and do not always guarantee no added delivery charges.

The irony is that the remote shopping initiative run by Gateshead council in 1984 was designed to help pensioners with mobility issues.

Mrs Snowball, then 72 and with a broken hip, could browse items using a remote control equipped with a computer chip that connected her television to retailers via her phone line. Groceries were selected on screen using a teletext style service, then payment was made in cash when the food arrived at her door.

Wendy Wills, professor of food and public health at the University of Hertfordshire, advises supermarkets on the needs of older shoppers. But she is frustrated how little progress has been made to help the country’s ageing population. She says: ‘I’m astonished the supermarkets aren’t doing more. They could introduce looser rules with low-cost delivery slots at quiet times as well as reducing the amount older people need to spend to qualify for free delivery.’

One excuse retailers give for not adapting their online offering for older shoppers is that this demographic does not use the internet. But last year, according to data from the Office for National Statistics, eight out of ten 65 to 74-year-olds used the internet, up from 52 per cent in 2011. Lesley Carter, head of health influencing at charity Age UK, says large supermarkets should look at what other food delivery services do to embrace the elderly. She says: ‘Ready meal delivery companies such as Wiltshire Farm Foods do a good job. Some voluntary organisations also undertake online shopping for groups of pensioners in a given area.’

Some Age UK branches place online shopping orders for elderly local residents, but these are still restricted by the spending rules set by supermarkets. Meal delivery firms such as Oakhouse Foods and Wiltshire Farm Foods are a popular alternative. Frozen meals are delivered to the door on a set day each week when the driver is in that area.

The lack of flexibility on delivery dates presents little problem for those who rarely leave their home. Plus, Wiltshire Farm Foods only requires a minimum £15 spend and does not charge for delivery. 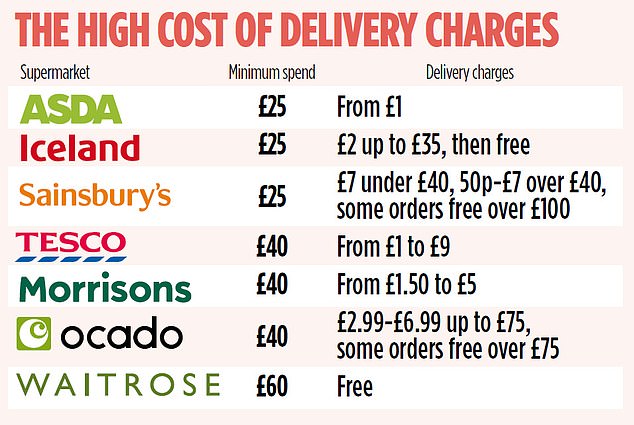 Retailers do provide some services helping vulnerable customers. Sainsbury’s has an ‘assisted’ shopping telephone ordering facility for those who cannot travel to its shops.

The Co-op does not offer internet shopping, but both Co-op and Iceland do provide home delivery on sums over £25 for items chosen and paid for in store.

Waitrose will set up online accounts allowing relatives or carers to order on a person’s behalf, adding an emergency contact should a person not respond to a delivery driver’s knock. In Milton Keynes, the Co-op is running a trial using the self-driving robots – small, secure cool boxes on wheels – that deliver a basketful of groceries to homes. Customers are charged £1 per delivery, plus the cost of the food order. The growing demand for online food shopping tailored to older shoppers is not just about convenience.

Home food deliveries can be a real lifeline for pensioners – more than a million over-65s currently suffer from malnutrition or are at risk of being malnourished, according to the Malnutrition Taskforce.

Not long ago, elderly and vulnerable people could rely on meals on wheels services.

In 2014, two-thirds of local councils still offered them, but cuts in adult social care budgets mean just 42 per cent of councils were still delivering food to those in need last year, according to research by the National Association of Care Catering.

The astonishing year that was 2020: This is Money podcast