‘I expected it to be worse,’ declared journalist Michael Makus on the Sky pundits sofa, minutes after Erling Haaland and Co had put Schalke to the sword. The 4-0 derby win for Borussia Dortmund didn’t feel quite as meaningful as it would have done in front of 80,000 fans, but it still beat the endless re-runs of seasons gone by.

As Dortmund midfielder Julian Brandt put it after the game: ‘football is football at the end of the day, and you try to have fun’. 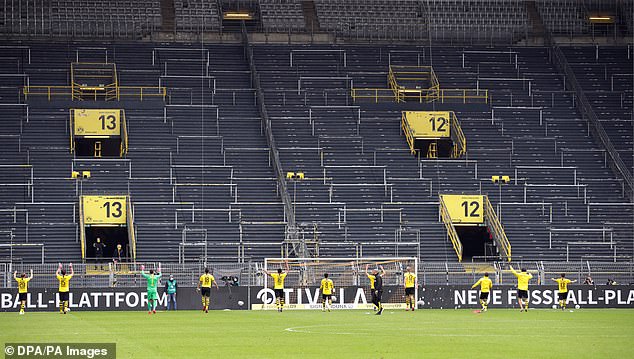 Not everyone was so happy, of course. One of the curiosities of the Bundesliga’s return is that those who care most about it have been among the fiercest critics. While the rest of the world has fallen over itself to pick a favourite German team, ultra groups in Germany have urged the league not to return, accusing it of losing touch with reality.

‘Football will survive, your business is sick,’ read a huge banner behind the goal at Augsburg on Saturday afternoon. In Cologne, posters appeared with the words ‘our money is more important than your health: Bundesliga at any price’.

Yet there was – as expected – no repeat of the scenes from last March, when large groups of fans gathered in front of Borussia Monchengladbach’s stadium to protest the so-called ‘ghost games’. While there were arrests at anti-lockdown demonstrations elsewhere in the country, police on patrol at Germany’s football stadiums reportedly had little to do. 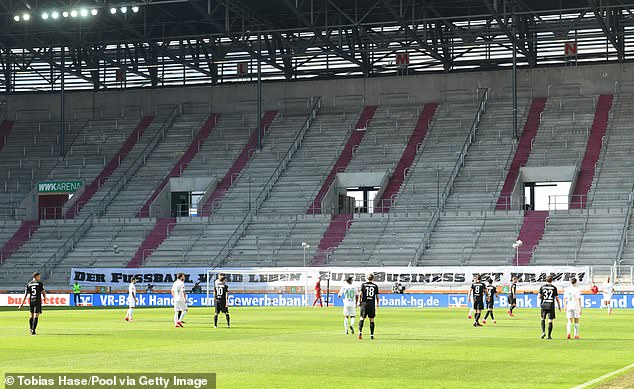 A banner at Augsburg’s stadium with the message ‘football will survive, your business is sick’

Inside the stadium, meanwhile, the Bundesliga did a relatively good job of keeping to regulations, with the occasional help of creative solutions.

Leipzig, unable to socially distance in their dugout, sequestered some boarding steps from the local airport to give their players a quicker route from the stands to the touchline. Freiburg and Gladbach players knocked elbows to celebrate their goals, and a smirking, Haaland wiggled happily at a safe distance from his team mates after he opened the scoring against Schalke.

Others found it more difficult to keep to the rules. As Dortmund traipsed in at half-time, the cameras caught fellow goalscorer Raphael Guerreiro firing a mighty globule of spit at the floor. Elsewhere, a Sky reporter had to be reprimanded live on TV by a presenter for wearing his mask underneath his nose.

If these were just minor offences, Hertha Berlin went for the full felony. In a brilliant 3-0 win at Hoffenheim, the Hertha players celebrated every goal as if it were still February, jumping on each other, high-fiving and even kissing.

‘Goal celebrations are part of football…it would be a shame if you couldn’t celebrate at all,’ protested Hertha coach Bruno Labbadia afterwards, while the DFL insisted there was no need for sanctions. 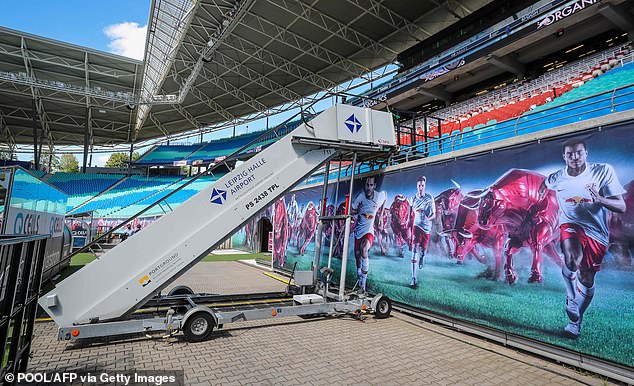 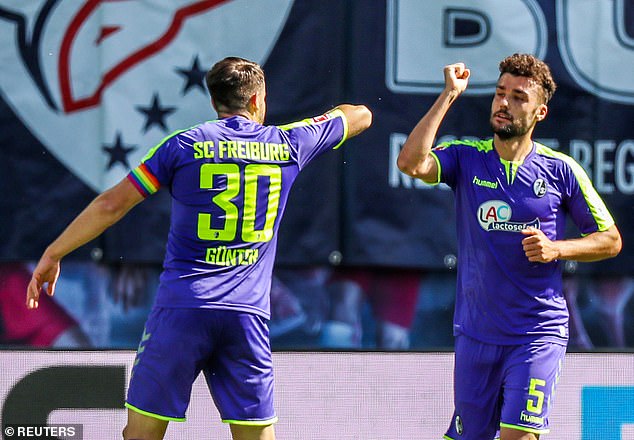 That may not be the last we hear of it, however.

Hertha were already in the dog house after Salomon Kalou’s ill-fated Facebook Live last week, which prompted stern warnings from local and national politicians. There will surely now be even more questions over whether the club are taking the rules seriously.

Yet on Saturday, at least, not even they were going to spoil the mood.

‘The re-start was worth it,’ North-Rhine Westphalia’s state premier Armin Laschet jubilantly told Bild. ‘If things go as well as they did today, then the football can continue.’

In reality, judgment will have to be reserved until the next round of tests on Monday and Tuesday. If at that point – or at any other – there is a sudden spike in positive results, then the Bundesliga has a problem. But for now, it can look back on an opening night on which, a few hiccups aside, the football mercifully took centre stage. 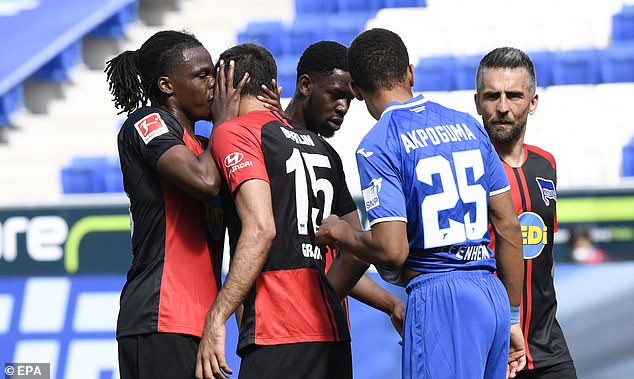 And in many ways, it was a reasonably familiar sort of football. Saturday’s action certainly proved that all the hot takes about how empty stadiums would change the on-field action were largely hot air.

Frankfurt sporting director Fredi Bobic had boldly predicted that there would be more goals than usual, envisioning ‘5-5 draws’ at various grounds. Half an hour into the afternoon, with five games still at 0-0, that prediction looked a little silly.

Schalke, it was said, would do better in the derby without the intimidating Yellow Wall breathing down their necks.

Their rather sheepish club chairman later had to declare that he had ‘no explanation’ for the 4-0 thrashing they instead endured. Perhaps it was simply that Dortmund are a significantly better team, with or without fans.

Yet another theory, that underdogs would suffer in general in the ghostly atmosphere, was also debunked. Freiburg, one of the league’s most likeable outsiders, saw to that with a 1-1 draw in Leipzig.

It was still not the game as it should be. The sight of Dortmund players clapping non-existent supporters in front of an empty Yellow Wall will be the enduring image of the weekend: a spontaneous, bittersweet gesture to the absurdity of football without fans.

Especially in a league with such a vibrant fan culture, it was a sad affair. But it was also entertaining, this first attempt at football in the time of coronavirus. As Der Tagesspiegel newspaper put it on Saturday evening: ‘Better this kind of football than no football at all.’

Greedy dormouse gets stuck in bird feeder after scoffing too many...

Tottenham ace Harry Kane hopes to return from injury ahead of...