Which travel destinations have the cheapest car hire? Britons’ favourite holiday location Spain is fifth, as we reveal the top ten

Analysis of eight million bookings per year has revealed the cheapest countries for hire vehicle costs during peak summer season.

And it’s good news for sun-hunting Britons, as Spain – the nation’s favourite holiday location – is among the top 10, with prices averaging out at just over £21 per day.

Cheapest hire car destinations: Analysis of 8 million rental vehicle quotes have revealed which countries have the cheapest daily rates for a hire cars

According to the Government’s latest tourism statistics, Spain is far and way the most-visited destination for Britons.

Some 15.7 million UK residents travelled there for work or pleasure in 2017. That’s seven million more than France, which is the second most popular destination for Britons going abroad.

Fortunately, Spain is also one of the cheapest locations for car rental, even in the height of summer.

Figures from online car hire service Rentalcars.com show the average cost of hiring a car in Spain during peak summer season is just over £21 a day.

And – based on historical booking data – most British holidaymakers choose an economy car, like a Ford Fiesta or Vauxhall Corsa, which comes in even cheaper at under £15 a day.

Out of season, prices should be even lower as demand falls.

Compare that with France, where the average economy car rental cost is more than double that, at £34 a day.

Only Slovakia (£18), South Africa (£20), Slovenia (£21) and Isle of Man (£21) are marginally cheaper when it comes to vehicle rental on average per day, according to the hire car comparison site. 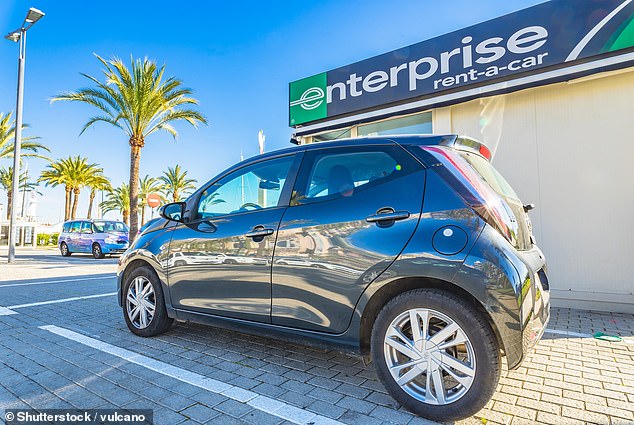 Slovakia has the cheapest rates, but Spain is in the top 5 most affordable locations. Pictured, a hire car in Palma de Majorca

Why is it so cheap to rent a car in Spain?

First, the sheer number of operators in the country helps to keep prices lower.

Over the years, operators have found that lowering their prices is an effective way to attract more customers in an extremely competitive market.

This trend got a big boost a few years back in 2008, when the global financial crisis meant holidaymakers tightened their belts and cut down on overseas holidays. 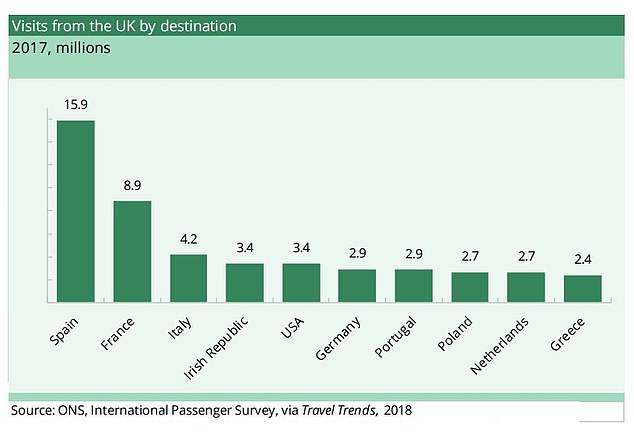 Spain is by far the most commonly visited nation by Britons, according to the latest ONS report 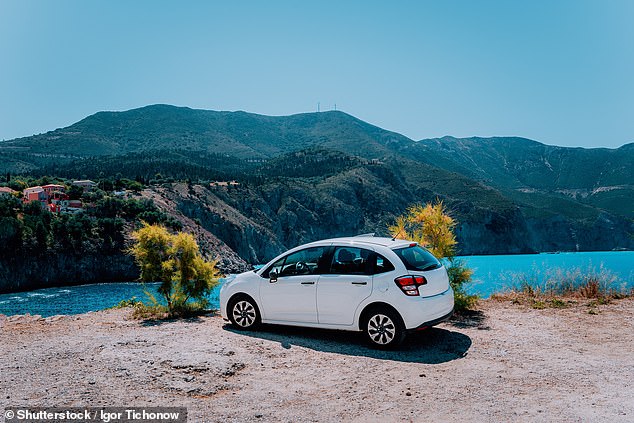 Spain’s cheap hire car costs are due to the overly competitive market and low cost of living, says Rentalcars.com

Lower demand saw car rental companies slash their prices to win business, as they decided it was better to earn less money per rental than have a car park full of unused cars.

Prices came down – and they’ve stayed down.

Secondly, it helps that the cost of living in Spain is relatively low compared to other Western European countries.

‘The price you normally pay in Spain for things like food, drink and accommodation tends to be lower than in countries like the UK and Germany, and more in line with places like Portugal and Greece,’ a spokesperson for the Rentalcars said.

‘It’s good news for holidaymakers on a roadtrip – and good news for anyone running a business in Spain, meaning they can pass on their savings to customers’.

1. Think about tolls in advance

Many popular holiday destinations in Europe and the USA have a toll-road system.

To help, rental companies may offer you a toll package to give you a certain amount of credit for an additional fee.

These can save you money if you’re going to be using toll roads a lot, but if you’re not planning to use main roads, you might save money by paying as you go.

It’s worth doing a comparison in advance.

While sharing the driving can be a bonus, it can also be expensive.

Prices vary wildly – in some cases you might be able to add a driver for free, in others it might triple the price – so be sure to check the terms and conditions before you go ahead.

If you can manage without, the saving could be well worth it.

3. Bring your own extras

If you’re flying to your holiday destination, there’s a very good chance the airline you’re using will let you take a car seat and pushchair with you for free, as long as your child is under 11.

This is certainly true of British Airways and Ryanair. What’s more – if you take your own car seat rather than renting one, you’ll be comfortable fitting it safely.

It’s also a good idea to use a navigation app on your phone, rather than renting a sat nav from the car hire company.

There’s no need to worry about data charges as there are several apps now that let you download maps in advance for free. Try Navmii or HereWeGo.

Man City: The quadruple is DEFINITELY on for Pep Guardiola’s side,...

HSBC boss in shock exit as board demands change to help...