The fish that recognise themselves in the mirror! Controversial finding could force scientists to reassess how we measure the intelligence of animals

By Victoria Allen Science Correspondent For The Daily Mail

Their poor memories mean fish are seen as the dunces of the animal kingdom.

But fish may not be as stupid as they appear, as a study suggests they can recognise themselves in a mirror.

Recognising your reflection in a looking glass is one of the primary tests of animal intelligence.

Two-thirds of babies can do it by the time they are 18 months old, as can chimpanzees and elephants, but not dogs, cats or some seemingly clever monkeys and parrots.

However cleaner wrasse fish have shocked scientists by suggesting they may have the same capability despite their tiny brains.

When shown a mirror, they appeared to notice coloured marks on their heads, which they then tried to scrape away on rocks and gravel in their tank.

Their poor memories mean fish are seen as the dunces of the animal kingdom. But fish may not be as stupid as they appear, as a study suggests they can recognise themselves in a mirror. Here, a cleaner wrasse interacts with its reflection in a mirror placed on the outside of the aquarium glass. Note that the mirror itself cannot be seen in this photo because the aquarium glass itself becomes reflective at the viewing angle of the camera

Dr Alex Jordan, who led the study from the Max Planck Institute for Ornithology and Osaka City University in Japan, said: ‘The behaviours we observe leave little doubt that this fish behaviourally fulfils all criteria of the mirror test as originally laid out.

‘What is less clear is whether these behaviours should be considered as evidence that fish are self-aware-even though in the past these same behaviours have been interpreted as self-awareness in so many other animals.’

To see if they could recognise their mirror image, scientists injected small amounts of brown dye into their throats and heads to look like a parasite.

The fish only attempted to remove the mark after seeing it in a mirror.

To check they knew it was themselves in the mirror, researchers presented them with an identical fish with the same mark seen through a clear divider.

The fish stopped trying to remove the mark on their own body, showing they were not fooled.

Cleaner wrasse almost never swim upside down but some did this 36 times in an hour in front of a mirror, suggesting they were watching their reflection.

They moved so they could better see the marks on their faces and also behaved aggressively towards the reflective surface.

The fish therefore satisfied every test for self-awareness, although experts remain sceptical. 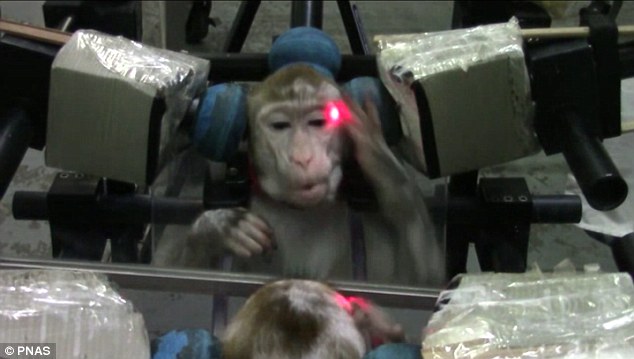 Recognising your reflection in a looking glass is one of the primary tests of animal intelligence. Two-thirds of babies can do it by the time they are 18 months old, as can chimpanzees and elephants, but not dogs, cats or some seemingly clever monkeys and parrots. This image shows a male rhesus monkeys successfully trained by a team of scientists in China in 2017 to pass the mirror self-recognition test

It may be that fish seen scraping marks on their faces were just performing a natural behaviour.

The creatures’ lack of hands, trunks or flexible necks also make it harder to properly judge how they are reacting to their reflection.

Reacting to the study, published in the journal PLOS Biology, Professor Frans de Waal, a leading primate researcher at Emory University in the US, published a commentary in the same journal.

He said: ‘To explore self-awareness further, we should stop looking at responses to the mirror as its litmus test.

‘Only with a richer theory of the self and a larger test battery will we be able to determine all of the various levels of self-awareness, including where exactly fish fit in.’

WHAT IS THE MIRROR TEST OF ANIMAL INTELLIGENCE?

The mirror test was developed by psychologist Gordon Gallup Jr in 1970 as a method for determining whether a non-human animal has the ability of self-recognition.

When conducting the mirror test, scientists place a visual marking on an animal’s body, usually with scentless paints, dyes, or stickers.

They then observe what happens when the marked animal is placed in front of a mirror.

The researchers compare the animal’s reaction to other times when the animal saw itself in the mirror without any markings on its body.

Animals that pass the mirror test will typically adjust their positions so that they can get a better look at the new mark on their body, and may even touch it or try to remove it.

They usually pay much more attention to the part of their body that bears a new marking.

Even if an animal doesn’t pass the test, they may still have interesting reactions to their reflections.

Many species respond aggressively, or even show affectionate behaviour. In such cases, it might be that the animal mistakes its reflection for another of its kind. This can lead to some amusing sights for human observers.

Humans are able to pass the mirror test when they are around 18 months old. But how do other animals fare?

Currently, a number of animal species have passed the mirror test. Not all individuals of each species pass, but many do.

Animals that have passed the test include:

Crypto Markets Are Maturing, but Gen Z Is Rewriting How Markets...

Arrival of Vikings to Ireland in the 10th century halted a...

Women CAN take contraceptive pill every day of the month says...