Tesla’s latest software update has a ‘Car-aoke’ function and lets you stream your favorite shows and movies directly to the vehicle’s display.

Users can access Netflix, Hulu, YouTube Spotify and the new feature ‘Car-aoke’ that lets them host a karaoke show to stay occupied on long trips.

Software Version 10.0 also lets users summon their car – as long as they can see it.

The self-driving vehicle navigates to its owner or a specific destination without a human inside.

‘We’re raising the bar for what people have come to expect from their cars with new entertainment, gaming, music, and convenience features designed to make your car much more capable, as well as making time spent in your car more fun.’

Smart Summon: Owners can activate their car to come to them or a specific destination without being inside.

The new software is rolling out via an over-the-air update today and is available for the Model S, Model X and Model 3 vehicles.

The center display connects to the user’s own streaming accounts, such as Netflix, YouTube, and Hulu or Hulu + Live TV, allowing them to watch your favorite shows, movies and content right from your car while parked.

Because self-driving cars allow your hands and eyes to roam free, Tesla has added ‘Car-aoke’ feature that ‘comes with a massive library of music and song lyrics, with support for multiple languages’, Tesla explained.

In addition to streaming videos and shows, users can access their Spotfiy Premium account – one feature the firm said was the most requested among its customers. 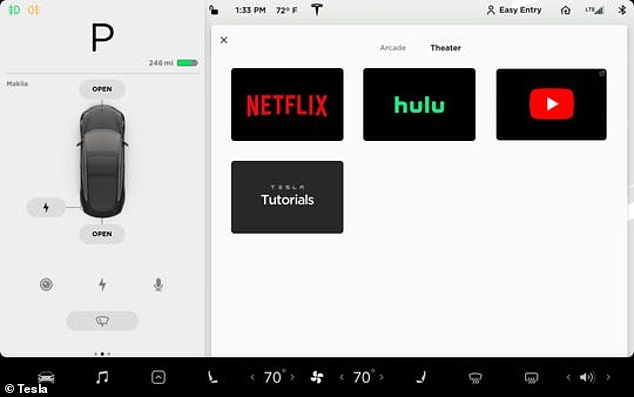 The addition of fun apps may have some consumers excited, but it seems the real prize of the day is the new ‘Smart Summon’ feature that was rolled out to those who have purchases Full Self-Driving Capability or Enhanced Autopilot.

This new addition enables cars to navigate a parking lot and come to their owner or a destination of choice, as long as their car is within their line of sight.

‘It’s the perfect feature to use if you have an overflowing shopping cart, are dealing with a fussy child, or simply don’t want to walk to your car through the rain,’ write Tesla. 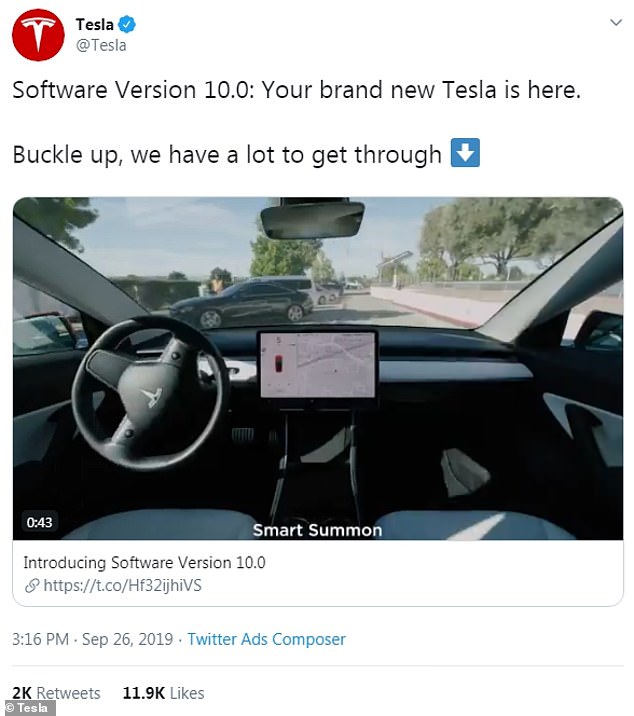 Customers who have had early access to Smart Summon have told us that it adds both convenience to their trips and provides them with a unique moment of delight when their car picks them up to begin their journey.’

‘Those using Smart Summon must remain responsible for the car and monitor it and its surroundings at all times.’

‘Version 10.0 is our largest update ever, and is yet another example of how Tesla ownership continues to get better over time.’