Tesla’s Autopilot system does NOT make driving safer and may even increase the risk of crashes, new report suggests – upending the findings of 2017 safety investigation

A new report has called into question the conclusion of an investigation launched by the US National Highway Traffic Safety Administration in 2016 following a fatal Tesla crash.

The NHTSA looked into the safety of Tesla’s autonomous assistance features after a Model S operating with Autopilot struck a tractor trailer that year, killing the Tesla driver in the first deadly accident of its kind.

A new investigation using data obtained through a Freedom of Information Act (FOIA) lawsuit, however, shows that the reality is a lot more complicated.

According to Quality Control Systems Corporation, which conducted the new analysis, the NHTSA misinterpreted the data it was provided; instead of reducing crashes, the findings suggest autosteer may have made accidents more common.

A new report has called into question the conclusion of an investigation launched by the US National Highway Traffic Safety Administration in 2016 following a fatal Tesla crash. File photo of a Tesla Model S

The NHTSA’s jaw-dropping claim that autosteer software reduced crashes by 40 percent caused many to speculate something may have been amiss.

Though the NHTSA did not initially release the data that Tesla had given them for the investigation, QCSC was able to get the data through a FOIA request and subsequent lawsuit.

Their findings, published in February, suggest the NHTSA’s conclusion was ‘not well-founded.’

According to QCSC’s, the team ‘discovered that the actual mileage at the time the Autosteer software was installed appears to have been reported for fewer than half the vehicles NHTSA studied.’

‘For those vehicles that do have apparent exact measurements of exposure mileage both before and after the software’s installation, the change in crash rates associated with Autosteer is opposite of that claimed by NHTSA – if these data are to be believed,’ QCSC wrote. 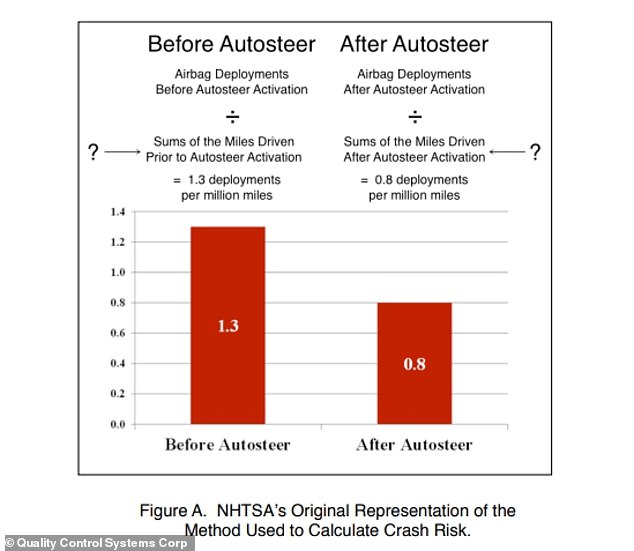 The NHTSA looked into the safety of Tesla’s autonomous assistance features after a fatal Model S in 2016. Ultimately, the NHTSA determined that the system wasn’t just safe, but actually slashed crash rates by nearly 40 percent. The NHTSA’s representation is shown above

‘For the remainder of the dataset, NHTSA ignored exposure mileage that could not be classified as either before or after the installation of Autosteer,’ the report says.

According to QCSC, the omission of this information led the NHTSA to wrongly interpret the rate of crashes strong enough to deploy the airbag.

The more recent estimates, though broad, paint a very different picture of the results, suggesting autosteer may have had minimal effect on crash rates, or even caused them to increase. 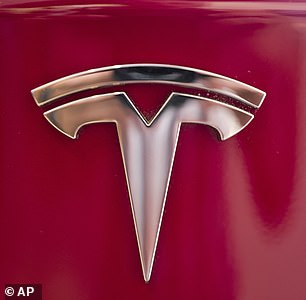 Tesla responded to the new findings in a statement to Jalopnik last month, arguing that QCSC also fails to represent the full data.

‘QCS[C]’ analysis dismissed the data from all but 5,714 vehicles of the total 43,781 vehicles in the data set we provided to NHTSA back in 2016,’ a Tesla spokesperson told Jalopnik.

Since the investigations first launched more than two years ago, Tesla has since begun publishing its safety data.

WHAT ARE THE SIX LEVELS OF AUTOMATION?

Level Zero – The full-time performance by the human driver of all aspects of the dynamic driving task, even when enhanced by warning or intervention systems

Level Two – The system can control the speed and direction of the car allowing the driver to take their hands off temporarily, but they have to monitor the road at all times and be ready to take over

Level Four – The system can cope will all situations automatically within defined use but it may not be able to cope will all weather or road conditions. System will rely on high definition mapping

Level Five – Full automation. System can cope with all weather, traffic and lighting conditions. It can go anywhere, at any time in any conditions

Couples whose pulses synchronise when they meet are more likely to...