It’s July 4th, and for many that means a four-day extravaganza, with cook-outs, firework parties, and staying up later than you normally would on a school night.

But the day-time cocktails and sunny beers can take their toll on your energy, skin and waistline by the end of the long weekend.

You may be actively watching your waistline on the cusp of summer, or simply want to be aware of your drinks’ contents.

Should you go with the chilled rose or frozen margs? Or would a glass of bubbly do the trick?

To answer those questions, here is your go-to cocktail guide from nutritionists at MuscleFood.com, based on the US National Library of Medicine’s calorie counter. 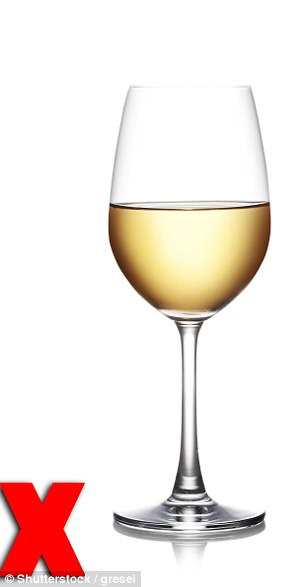 Champagne is a healthier alternative to sweet white wine, which comes with an 130 calories per serving. A glass of bubbly only has 90 calories

Although one glass may seem innocent, each serving of rose wine is around 130 calories, according to the U.S. National Library of Medicine. This is almost equivalent to a glazed chocolate doughnut.

Champagne is a lower-calorie choice, at 90, which means two glasses of bubbly equals one glass of sugary wine.

Plus, recent research from Brown University found that drinking five or more glasses of white wine a week increases the risk of developing the skin condition rosacea by 49 percent.

Even one to three glasses a month raises the risk by 14 percent.

It is unclear exactly why white wine causes rosacea, but it may due to the drink weakening the immune system and causing blood vessels to dilate.

2. Drink a COSMOPOLITAN not a LONG ISLAND ICED TEA 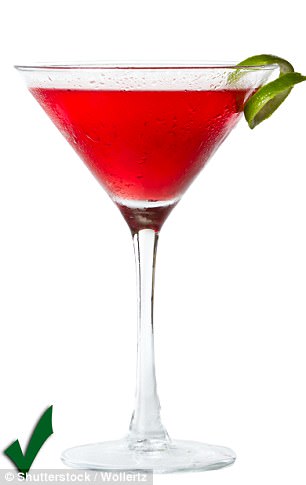 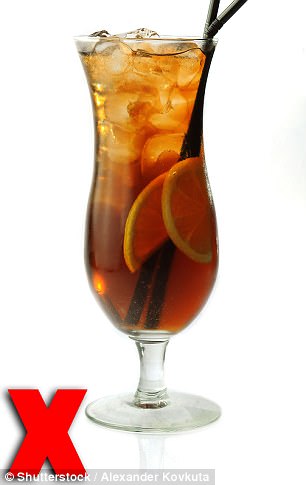 Long Island Iced Teas are the worst drinks to have on a night out, anywhere from 420 to 780 calories. A Cosmopolitan has 146 calories per 2.75 ounces

A Long Island Iced Tea is the worst drink to have on a night out.

Depending on the bartender, they can contain splashes of vodka, rum, tequila, gin, triple sec, sweet and sour mix, and coke.

All the alcohol and mixtures packs a heavy punch, depending on who makes the drink anywhere from 420 to 780 calories – more than a McDonald’s cheeseburger at 310 calories.

Still looking for a strong drink with some sweetness?

A Cosmopolitan should do the trick, coming with vodka and a splash of cranberry at 146 calories per 2.75 ounces.

3. Drink a PROTEIN BEER not a LAGER

For beer drinkers, many fear the dreaded beer belly. It’s hard to avoid: lagers have 150-200 calories per pint.

Darren Beale, from MuscleFood.com, said: ‘There are many dieters who will still want to enjoy a few drinks without having to worry about overstepping their daily intake, and luckily there are alternatives which mean they can.’

Newer to the market are protein beers, which average at 92 calories.

It boasts of having as much protein as a savory steak and has an alcohol level content of 3.2 percent.

Note: Each drink is based on their typical serving sizes

4. Drink a FUZZY NAVEL not a PIÑA COLADA 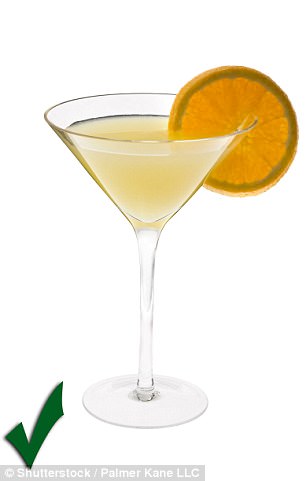 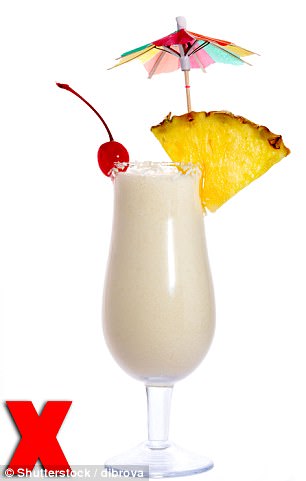 Choose a Fuzzy Navel over a Piña Colada. The peach schnapps cocktail is 253 calories while the coconut and pineapple drink is 526

While on vacation it’s easy to get swept up with the tropical feel and indulge in sugary and fruity drinks.

Instead of a Piña Colada at 526 calories, order a Fuzzy Navel which contains peach schnapps and orange juice at 253 calories.

In general, fruity drinks are more likely to have a higher calorie count because of all the fruity add-ins.

For the healthiest tropical drink, opt for cocktails that are made fresh.

A gin and tonic contains around 200 calories, with the tonic water making up a good of those calories.

6. Drink a MARTINI not a MOJITO 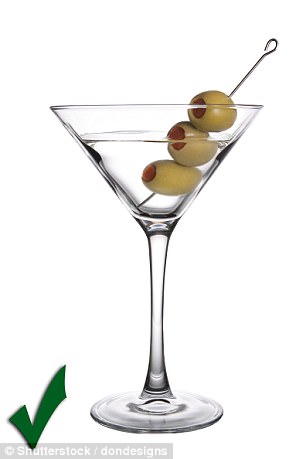 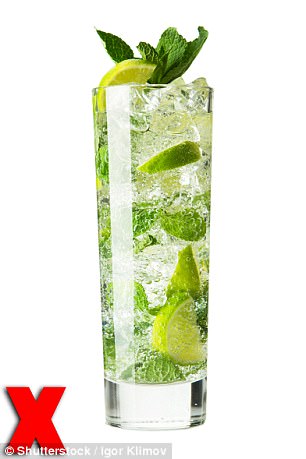 Mojitos are sweetened with sugar syrup, bringing the calorie count to 220. A Martini, on the other hand, is just 160 calories  per two 1/2 ounces

Although a fresh and minty drink sounds lovely in the summer heat, Mojitos are sweetened with sugar syrup, bringing the calorie count to 220.

A chilled Martini is the smarter option, with an extremely low calorie count of 160 per two 1/2 ounces.

Plus, it comes with a salty snack dunked in.

7. Drink a RUM AND DIET COKE not an ALCOPOP

Leave the Smirnoff Ice in the cooler. Added sugars make these alcopops have 230 plus calories.

The smarter option is a Diet Coke and rum, with only 100 calories. It has the same level of sweetness and your scale will thank you later.

8. Drink a MOSCOW MULE not a MARGARITA 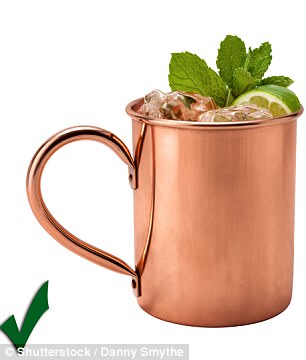 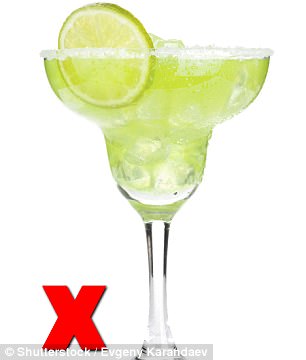 Both of these drinks come in fun glasses, but one is much nicer to the waistline. Moscow Mules have 138 calories and Margaritas are usually 168 calories

The sweet and salty Mexican tequila cocktail is one of America’s festive drinks of choice once the sun is out.

But if you’re watching your waist, you’re better off with the Russian-inspired American classic: the Moscow Mule, invented in a Los Angeles British pub in 1941.

They usually come in trendy cooper cups and only have 138 calories, according to Eat This, Not That.

This diet-conscious option is bland but effective. The Skinny B***h is simply vodka, soda water and lime, just at 106 calories.

This is a better alternative than choosing tonic with vodka, because of the 200 calorie count.

Now you can get your BREASTS checked for cancer on the...