There are few more reassuring sights in an English summer than a smiling Sue Barker seated in the Wimbledon studio leading the BBC‘s coverage of the Championships.

Never would it be more welcome than in these unsettling times, her cheerfully anchoring the corporation’s flagship annual sports event. Many millions will share her anguish at the cancellation of this year’s tournament, but do not despair — help is at hand.

From her Cotswolds idyll, the veteran presenter reveals that plans are advanced for the Beeb to make the best of what has transpired, and serve up a lively concoction to give viewers an approximation of their fortnight’s tennis fix. 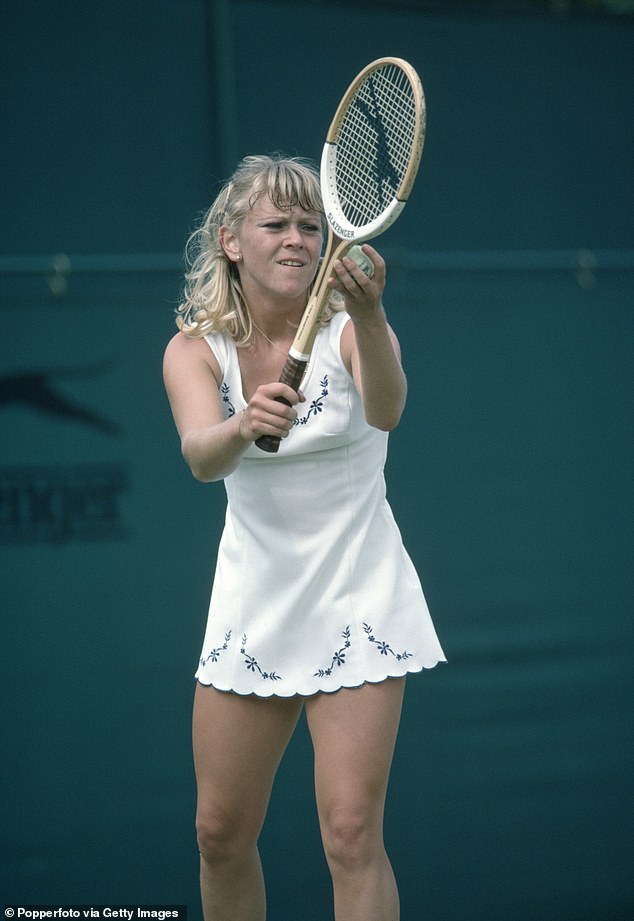 Health and safety concerns permitting, it could even involve her taking up residence at one end of that oddly shaped table she sits at in SW19.

‘We intend to fill the fortnight with tennis action and chat,’ she says. ‘The plan is to film links around Wimbledon or present live from there if it is safe to do so.

‘Maybe I will go down and present some of the great matches and memories.

‘For me personally it would be great if we could be in the studio and have, say, John McEnroe and Martina Navratilova from America via a link, perhaps Boris Becker wherever he is; Andy Murray if he would do it, to talk about his finals and his first appearances at Wimbledon.

‘Obviously you can’t totally replace everything, but it would be nice to have some tennis and a live element to it as well.

‘I think we would do a lot at a weekend. In an ideal world I would love to do the studio every day. You never know who might want to join us, the big names of today and the past, some of them could talk about their special moments. 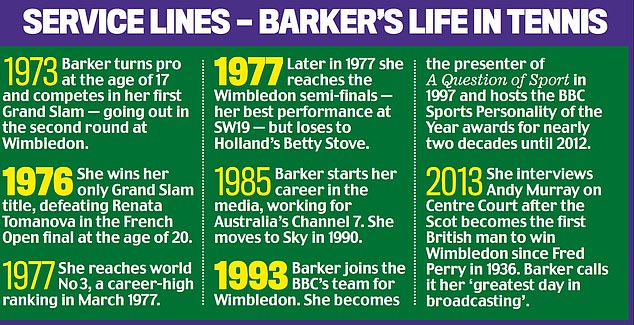 ‘I am sure the players would like to be involved as they won’t be playing, and it could be quite exciting.’

If, heaven forbid, there is still some major lockdown in place come late June and early July, the ratings for this virtual Wimbledon might even challenge those for the real thing.

It is hardly surprising that Barker yearns to be back at the All England Club. She first visited the place aged 11, when a tennis-mad PE teacher took up a party from her school in Devon by minibus, going there and back in a day.

She made her playing debut there aged 16, and has not missed a year since, usually as a great British hope or working in television.

Therefore she felt a gathering sense of dread from early March, as escalating events brought the reality of cancellation galloping closer and closer. ‘I suspected it wouldn’t happen even two weeks before the actual announcement,’ she says.

‘They only really had one option. It is such a big production, all the suppliers, all the people who work there, from players to people who train the ballkids.

‘I wondered at one point if they might have a reduced version but a watered-down Wimbledon just wouldn’t seem right. 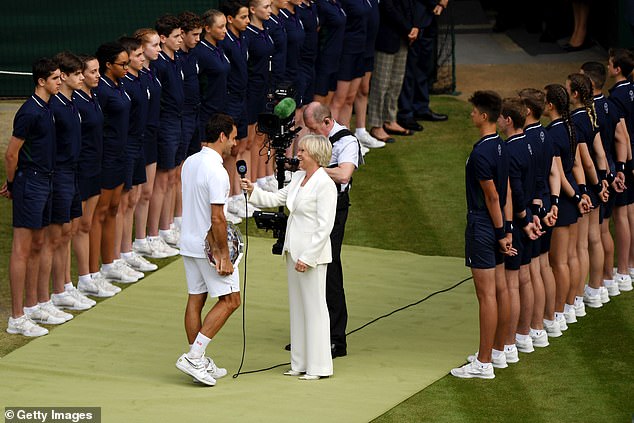 Since retiring as a pro, Barker has worked every Wimbledon since 1993 as part of the BBC team

‘I was really disappointed because it has been such a big part of my life. I got such a buzz from the first visit as a schoolgirl, and I still get it walking through the gates.

‘It will be a strange summer but it was the right decision. I will most miss seeing all the great champions who I work with, sitting alongside McEnroe, Boris, Chrissie Evert, Billie Jean King, Martina.

‘They are great champions and also my friends. We have a lot of fun. But we can still try to do things to make up for it this year.’

On a normal working day at Wimbledon, Barker still likes to snatch her only chance of watching a match live, after her shift ends around 6pm.

She remains a fan of the sport, but admits that away from her TV duties she would be concerned about attending any event in the present situation. With that in mind, she is not overly optimistic about when professional tennis can recommence in earnest. 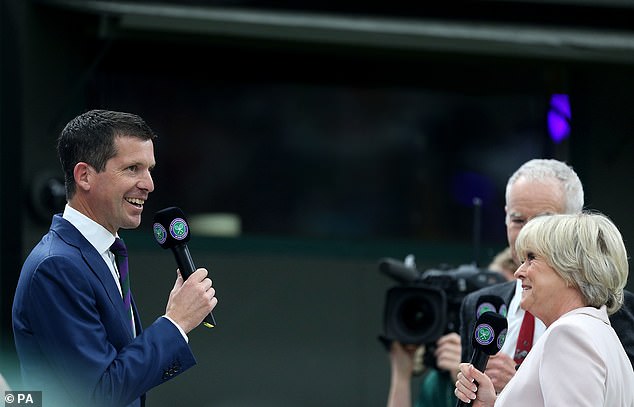 ‘You hear a lot of different things. At the moment it is so up in the air, for me personally if the virus is still around and the circuit starts I would very much think twice about whether I would risk going.

‘I just wonder how many people will feel safe going to watch a tennis tournament in a packed stadium when there still isn’t a vaccine. You’ve got to wonder how it will be over the next year.

‘I fear we won’t be back to normal for 12 months. There is going to be the fear of a second wave, so it’s a scary time.

‘I’m sure there will be changes, whatever happens. There will be social distancing in the player community. It’s going to be very difficult to make the decisions.’

Her disappointment at Wimbledon’s first fallow year since 1945 is compounded by her belief that the sport as a whole has reached a fascinating juncture. ‘The men’s game is so beautifully poised with Novak Djokovic, Roger Federer and Rafael Nadal vying to win the most Grand Slams.

‘Maybe Djokovic now will end up with the most. I never thought anyone would catch Roger — it’s amazing to think that when he won (Wimbledon) in 2012 that was his 17th, and Novak only had five. It would have been fascinating to see how that developed. 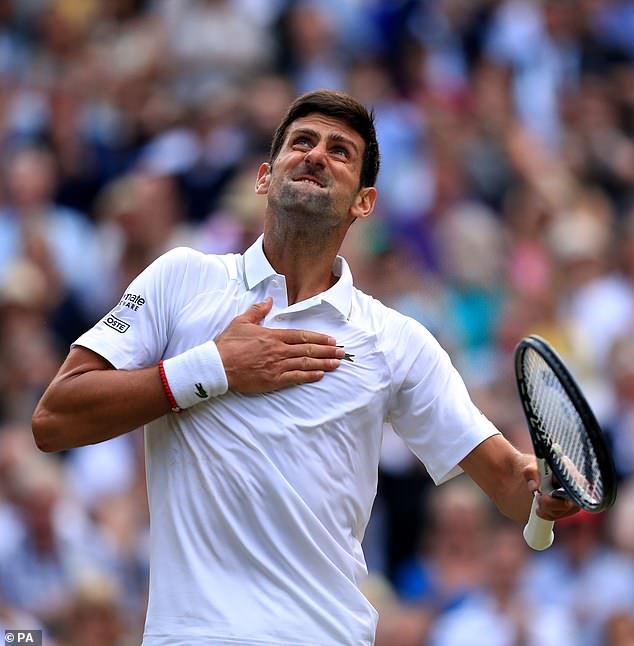 ‘In the women’s game, I do genuinely feel for the first time in years we are seeing a young group who are really going to dominate. You get the feeling with Coco Gauff and Bianca Andreescu that they are going to become household names, and that is what we need, not just players winning a big tournament and then fading.

‘I would love to see Serena Williams win her 24th (Grand Slam title) because I think she deserves it, but time is ticking on and Wimbledon this summer was a big chance for her, as well as being Roger’s big chance.’

A scheduled part of the tournament this summer was to have been an official celebration of the ‘Original Nine’ — the nucleus of women led by King and US promoter Gladys Heldman who, 50 years ago, broke away to form what is now the WTA Tour. Barker was part of the second wave of professionals who followed them.

Her calibre as a player is sometimes overlooked. She won the 1976 French Open and made the last four at Wimbledon. She went on to break down barriers in broadcasting by becoming the first eminent female ex-player to become a high-profile presenter.

The biggest inspiration for her in all those achievements was that force of nature, King. 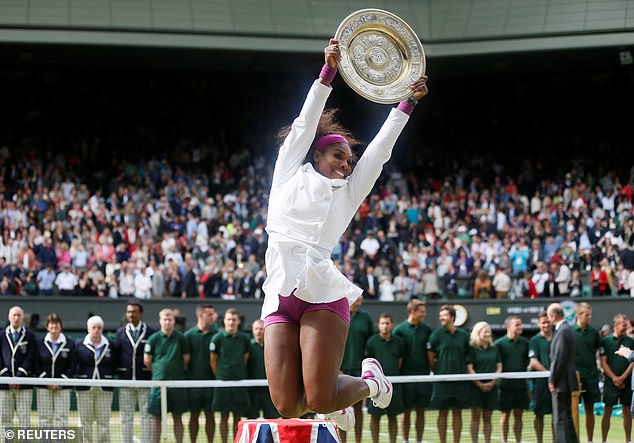 ‘I remember Billie Jean telling me as she was approaching retirement, “You are the next generation and you have to take over and make sure you promote us. If anyone asks for an interview, you just do it. We have to sell it or we won’t have a tour”.

‘I used to play 38 weeks a season as a top-10 player and make about £100,000 per year, so it was very different then. Perhaps other than athletics, tennis has produced more female superstars than any other sport, and a lot of that is down to Billie Jean.

‘In broadcasting it was the same. She taught me the mentality to go out and do it, and not be afraid to try. Without her I wouldn’t have been able to do so much of what I have managed.

‘I have done every Wimbledon for the BBC since 1993, starting on the highlights show with Harry Carpenter. Des Lynam was there and I was in awe of working with two legends. It changed my life.’

She became the second woman to present Grandstand after Helen Rollason, at a time when presenting was a rarity for ex-players of either sex. ‘There are now loads of women presenting sport across all the channels and it’s a joy to see,’ says Barker.

‘And on A Question of Sport we have a lot of sportswomen who are famous in their own right.’ 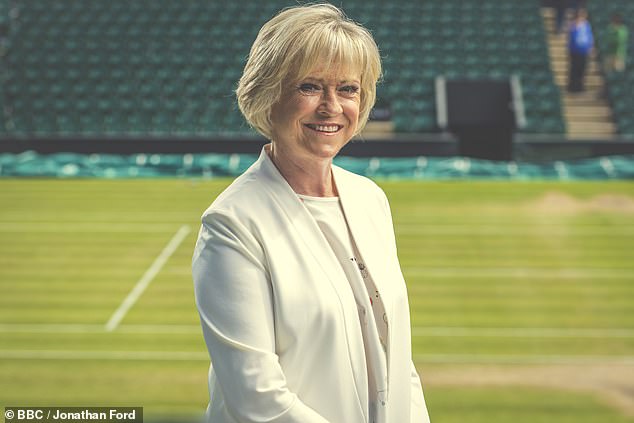 Her long-running sports quiz has eight programmes recorded and is ready to go for a new series, although they are having to wait for more to be allowed to be filmed when studios open up again.

For now she is in her home with husband Lance and her 98-year-old mother, Betty, who normally lives independently but has joined them while the lockdown is on.

‘I’m doing three online classes of ballet with pilates per week, growing vegetables and exercising our two dogs,’ says Barker, who celebrated her 64th birthday yesterday. ‘We are lucky we have a garden. Everyone has pulled together around where we live and supported each other. I have found that very uplifting in this time of incredible sadness and worry.

‘Perhaps we won’t have much sport this summer and we’ll miss it, but ultimately that’s a small price to pay.’

2020 US Open: What to know about the pro golf event

Which Sales Funnel Builder is Better?

2020 Tour Championship: What to know about the event