In a report published by the National Audubon Society on Wednesday, researchers say that 389 of the 604 species assessed in the study – 64 percent of the varieties analyzed – will be at either a moderate to high risk of extinction if the Earth continues on its projected path of warming 3 degrees Celsius by 2100.

Among the perils for avian species across the continent would be increased wildfires, springtime heat, and heavy rainfall fueled by climate change, they found.

Endangered species include some of the most common birds found in North America, like the American Robin, the American Goldfinch, Saltmarsh Sparrow, the and the Oriole. 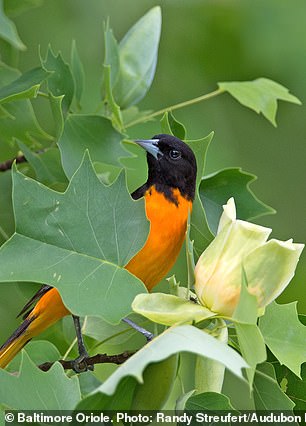 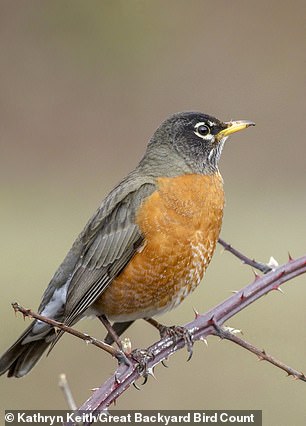 The study – published in Conservation Science and Practice using more than 70 data sources plus 140 million bird records – suggests that if warming trends continue, birds won’t be the only species at risk.

Birds are what’s known as a ‘sentinel species’ meaning their health can generally be extrapolated to suss out the health of an overall environment.

In other words, if the birds are in rough shape, the environment, and other species that live in it, likely are as well.

‘Birds are important indicator species, because if an ecosystem is broken for birds, it is or soon will be for people too,’ said Brooke Bateman, Ph.D., the senior climate scientist for the National Audubon Society in a statement.

‘When I was a child, my grandmother introduced me to the Common Loons that lived on the lake at my grandparent’s home in northern Wisconsin.

Those loons are what drive my work today and I can’t imagine them leaving the U.S. entirely in summer but that’s what we’re facing if trends continue’

Researchers’ finding show that birds living closer to the North Pole appear to be facing the most danger, with all 16 Arctic species, and 47 of the 48 species the live in the boreal Forest – high-latitude forests – deemed to at moderately to high risk of extinction if temperatures rise. 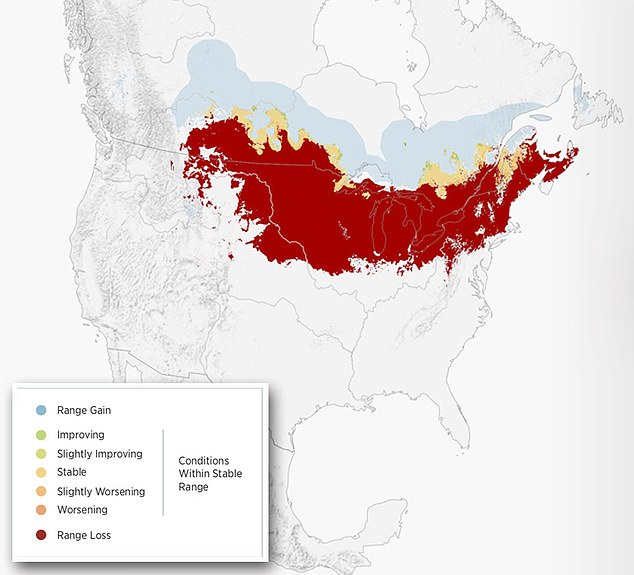 This recent report adds to increasingly long list of bad news for birds in both North American and Canada over the past year.

In a disconcerting study just last month, researchers found that there are almost three billion fewer birds in the United States and Canada now that there were 50 years ago — a loss equivalent to more than one in every four birds.

Findings used observations, along with a decade of radar data on migrating birds, to highlight what researchers call a ‘widespread ecological crisis.’

They found that North American bird populations have plummeted by 29 per cent since 1970.

According to the Audubon Society’s research, however, it’s not too late to help conserve and save bird populations.

If humans are successful in keeping the climate to warming only 1.5 degrees Celsius – half of the current trajectory – then 76 percent of the species studied could benefit greatly.

‘There’s hope in this report, but first, it’ll break your heart if you care about birds and what they tell us about the ecosystems we share with them. It’s a bird emergency,” said David Yarnold, CEO and president of Audubon.

WHAT IS CAUSING THE BIRD DECLINES?

The study did not set out to analyse the causes of each bird species’ individual decline.

Nevertheless, the researchers noted that the steep drop in North American birds parallels the losses of birds elsewhere in the world.

This suggests that there are multiple interacting causes that are reducing breeding successes and increasing mortality rates.

The largest factor driving the declines, the team said, is likely the widespread loss and degradation of habitats, especially due to growing agriculture and urbanisation.

These have included predation by free-roaming domestic cats, collisions with man-made structures, and the pervasive use of pesticides that is thought responsible for widespread declines in insects, which serve as an essential food source for birds.

Climate change is expected to compound the challenges to bird species by further altering habitats and threatening the plant communities on which birds rely.

The researchers have called for more research to better pinpoint the primary causes for the declines of individual species.

Egypt mysteries ‘uncovered’ by Google Earth with images of pyramids and...

Interactive map reveals top 10 areas of the US at risk...