Blob-like jellies could be the first animals that ever existed after a fossil of an ancient jellyfish was discovered in 600 million-year-old rocks.

The fossil, which resembles a jelly fish, is similar to the comb jelly species that still exist today, which are predators, feeding on small marine organisms.

This previously unknown animal doesn’t have a name yet but microscopic analysis showed similar features to comb jellies including tentacles and mucous layers.

Blob-like jellies could be the first animals that ever existed after a fossil of an an ancient jellyfish was discovered in 600 million-year-old rocks. The carnivorous comb jellies are similar to some species that still exist today (stock image of a comb jelly)

The oldest animal to have ever lived was thought to be the Dickinsonia, an organism called an ediacaran, which lived 541 million years ago.

The discovery of the jellyfish – revealed in a report to Graham Lawton in the New Scientist – show that it existed more than 40 million years earlier than the Dickinsonia.

The unnamed animal seems to have belonged to a group of animals that still exists today: Ctenophora, or comb jellies.

If the fossil is a comb jelly like its carnivorous counterparts today then it shows that it must have been part of a food web and a complex ecosystem. 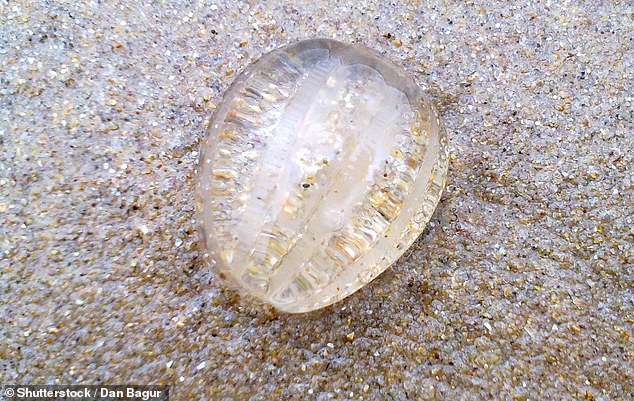 The unnamed animal seems to have belonged to a group of animals that still exists today: Ctenophora, or comb jellies. Microscopic analysis showed what appear to be tentacles, muscle tissue, nerve cells, gonads, mucous layers and clusters of hairlike-structures (stock)

The fossil was discovered by Dr Zhenbing She at the China University of Geosciences in Wuhan. ‘The origin and earliest evolution of animals is a fascinating question that has puzzled scientists for many decades.’

Dr She’s team found the fossils measuring about 0.7 millimetres across. The first clue to their identity was their jellyfish-like shape.

Dickinsonia is a genus of fossils that includes 200 species which have segmented bodies.

The first specimen was discovered in South Australia by the late Red Sprigg, a geologist and conservationist.

Sprigg named the specimen after Ben Dickinson, then Director of Mines for South Australia – the same department that employed Sprigg.

The specimen became one of the first described fossils from the Ediacaran period in 1947, and was initially thought to be an organism similar to a jellyfish.

Dickinsonia is composed of multiple ‘units’ that run down the length of its body.

Since the fossils discovery, its strange body plan has been compared to that of a worm, a placozoan (a simple, multi-cellular invertebrate animal measuring 1 millimeter across), a bilaterian (an animal with bilateral symmetry) and several non-animals including fungi, lichens and even entirely extinct groups.

The fossils were found in a drill core taken from the Doushantuo Formation in China.

Fossils dating as far back as 631 million years ago have already been found in these beds but scientists have not been able to determine exactly what these are.

They are only visible through microscopes, and may just be algal cells or developing animal embryos.

Dr She said that the fossils’ features are similar to the comb jelly, which are thought to be more primitive than the jellyfish.

The comb jelly Ctenophora because the fossil’s hair clusters look like structures called ctenes that comb jellies use to swim.

The fossils most closely resemble the living genus of comb jellies called  Pleurobrachia, or sea gooseberries.

If the new fossils are comb jellies, then it opens the door for more discoveries because the majority of comb jellies today feed on small marine species.

If the fossil was a carnivore too when it was alive, then it shows it was part of a food chain in a complex ecosystem.

‘There are many other creatures in the deposit, but we are not sure what they are,’ Dr She said. 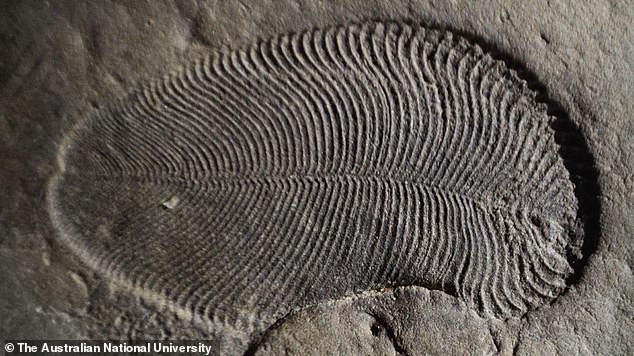 The 558-million-year-old Dickinsonia which was discovered last year , was described as a combination of a jellyfish, a worm, a fungus and a lichen.

The oval-shaped lifeform existed at least 20m years before the ‘Cambrian explosion’ of animal life, according to the research.

The Cambrian explosion took place about 540 million years ago and saw the emergence of modern-looking animals such as snails, bivalves and arthropods.

WHAT WAS THE ‘CAMBRIAN EXPLOSION’?

Scientists have long speculated that a large oxygen spike during the ‘Cambrian Explosion’ was key to the development of many animal species.

The Cambrian Explosion, around 541 million years ago, was a period when a wide variety of animals burst onto the evolutionary scene.

Before about 580 million years ago, most organisms were simple, composed of individual cells occasionally organised into colonies.

Over the following 70 or 80 million years, the rate of evolution accelerated and the diversity of life began to resemble that of today.

It ended with the Cambrian-Ordovician extinction event, approximately 488 million years ago.

A recent study linked the historic rise in oxygen responsible for the formation of animal life on Earth to fossil fuels. Pictured: This black shale, formed 450 million years ago, contains fossils of trilobites and organic material that helped support these in oxygen

Blow to Walmart’s same-day grocery deliveries in race against Amazon as...