Veteran investment boss Martin Gilbert is preparing for retirement after 36 years at the helm of his firm.

It comes as SLA fights off a brutal share run. 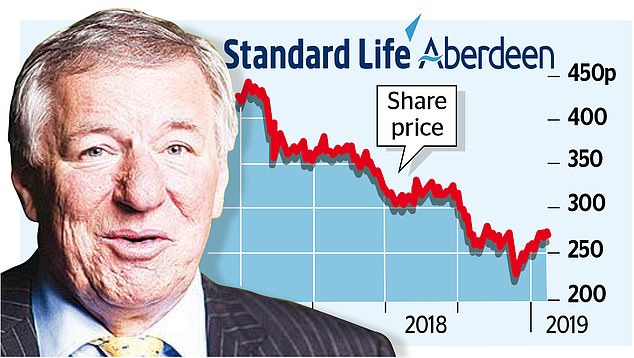 At the World Economic Forum in Davos, Gilbert said: ‘I’m getting on. I’m already the second-oldest chief executive [of a British blue-chip company] as well as the longest-serving. I’m in the back nine at golf.’

It comes a year and a half after SLA was created in an £11billion merger between Aberdeen Asset Management, which Gilbert founded in 1983, and rival Standard Life.

But shares have since fallen more than 45 per cent amid concerns over the future of old-fashioned stock-picking companies.

Gilbert blamed the drop on the rise of passive funds, such as those run by Vanguard and Blackrock, which track the wider stock market rather than pick top performers.

But he hopes performance will pick up after markets dropped around the world.

At a time of widespread price falls, Gilbert said, traditional fund managers should come back into their own as they offer better protection.

He said traders are realising this, with SLA up 20 per cent from the lows of December.

‘Hopefully we can get back to the reality of choosing the stocks that are best value.’

Flint formerly chaired HSBC and it is hoped his reputation will attract big-name candidates to take charge of SLA. Shares fell 1.4 per cent, or 3.75p, to 267.55p yesterday.