Attorney Nigel Samuels also revealed that South African police officers had seized the Springbok second row’s legally held firearm and sent it to be DNA tested at a laboratory.

It is alleged the lock forward had taken his firearm from its holster and hit two local men three times with it while using racial slurs against them after a night out drinking.

Unclear CCTV of a scuffle was later posted on social media along with an image of a man bleeding heavily who friends of the alleged victim said had been struck by the player.

Allegations Etzebeth assaulted two men came to light in August but forensic testing of the weapon used in the alleged assault was announced yesterday.

South Africa’s Eben Etzebeth leaving the field during the Rugby World Cup game against New Zealand last month. He has been accused of attacking two men outside a bar in his home country

The late-night incidents are alleged to have happened the day before South Africa’s World Cup squad was announced.

Etzebeth, who won his 81st cap today playing for South Africa against Italy today, denies the allegations him and insists he never attacked anyone or used any racial slurs.

He said in a statement after the allegations surfaced that it was ‘completely untrue and unfounded to claim that I physically or racially abused anyone … multiple witnesses can corroborate that’.

Lawyer Mr Samuels said: ‘The investigating officer told me that they are still awaiting the DNA reports to confirm if there is any other DNA on the firearm other than that of Etzebeth.

‘So if there is any other DNA on the gun than that of Etzebeth’s then the police will take DNA swabs from my clients and will match them up to see if their DNA is on his gun.

‘This is what they both say in their affadavits which make up the police docket.’

Etzebeth, 27, was picked by South Africa to play in the vital game against Italy today in the Rugby World Cup in Japan despite facing calls for him to be sent back home to face trial. 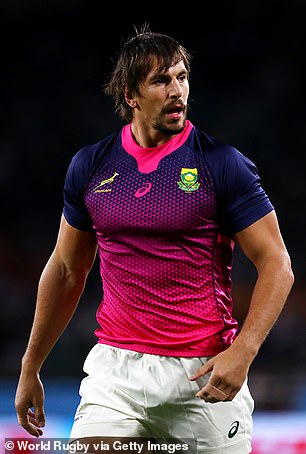 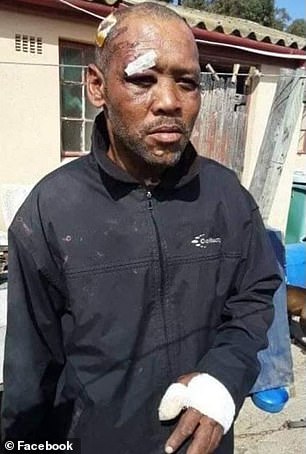 The 6ft 8in tall and 19 stone second row has been in hot water since being accused of racial and physical assault by beating the two men with his gun and calling them a derogatory name.

Under pressure Springbok Etzebeth who is the cornerstone of the South African scrum and line out responded to the allegations on his Facebook page by totally denying any wrongdoing.

The powerhouse rugby star wrote: ‘It is completely untrue and unfounded to claim that I physically or racially abused anyone in Langebaan as has been reported on social media.

‘Multiple witnesses can corroborate that. I am and will always strive to be a true ambassador to this beautiful rainbow nation and the sport of rugby that I love’ he said.

Local men Enver Wilsnach, 42, and Shiyaad Smith, 21, have both laid charges with the police that Etzebeth assaulted them by striking them in the face with a firearm after a night out.

Mr Wilsnach told News24: ‘I was a fan of his and I am disappointed in him. I’m hurt by what happened and shocked that he was still sent to the World Cup but cannot say more.’ 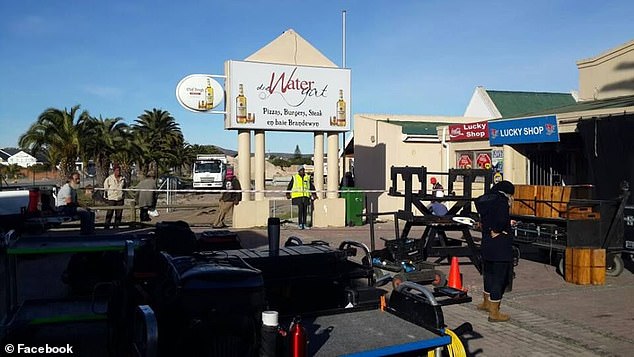 The Die Watergat bar in the South African coastal resort of Langebaan, where rugby star Eben Etzebeth allegedly attack two men – hitting them with a firearm

South African Rugby is carrying out its own internal investigation but it is not believed they will send Etzebeth home in disgrace unless he is charged by cops and requested to return.

Mr Smith told News24: ‘We’re supposed to look up to him. He plays for the Springboks. What happened changed the way I see him’.

Following legal advice both alleged victims would say no more in case it jeopardised their case against the star.

Etzebeth had been out drinking with his brother and a cousin and a group of friends on the night before the Springbok team was officially announced by SA coach Rassie Erasmus.

They were drinking in a popular seaside pub and sports bar called Die Watergat in the resort of Langebaan on the west coast some 80 miles north of Cape Town and left at 2am.

It is said that an ugly confrontation then broke out between Etzebeth’s group and locals.

The two men Mr Wilsnach and Mr Smith alleged Etzebeth used the word ‘hotnots’ which is a derivative of Hottentot which is a historical description of the original indigenous people. 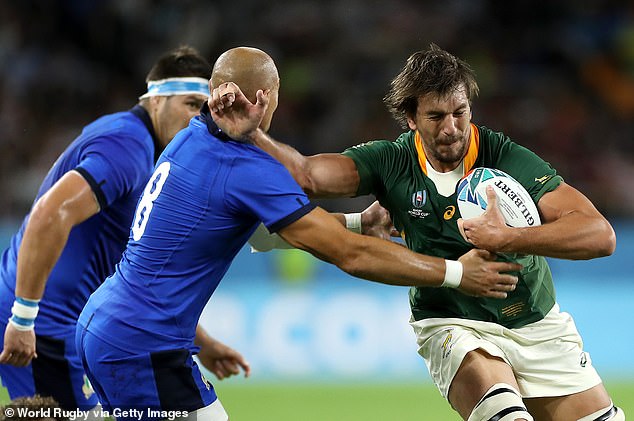 They claim that the word is a racial slur and as insulting as the ‘K’ word is to black people, similar to the ‘N’ word in Britain and the US.

The Springbok lock met with the South African Human Rights Commission with his lawyers following the alleged assault at the end of August before the squad flew to Japan.

SA Rugby Chief Executive Officer Mr Jurie Roux told the media that if the allegations were found to be true then Etzebeth would have to withdraw from the squad and fly home.

He is also said to have told Etzebeth if he lied about not having racially abused or assaulted the two men then he would never wear the green and gold shirt of the Springboks again.

Police spokesperson Sergeant Noloyiso Rwexan confirmed the assault case was active and the docket had been sent to the National Prosecuting Authority to make a charging decision. 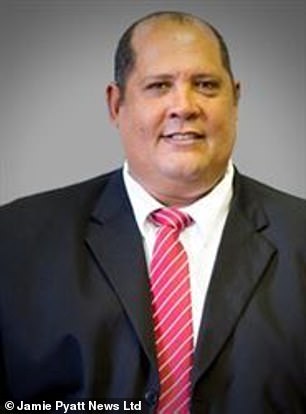 The South African Human Rights Commission is taking the matter to the Equality Court today to see if it will her what amounts to a civil case and ask for a date for it to be heard.

The case can be brought even if the National Prosecuting Authority does not bring a criminal case and if it finds against Etzebeth its punishment results in fines or community service.

Lawyer for the two alleged victims Mr Samuels said that there was already enough evidence in the original docket sent to the NPA and was disappointed they had asked for more.

He said: ‘The NPA want more but I believe there is already enough evidence for a prima facie case to answer and it is not the NPA’s job to decide if he is guilty or not but to establish if there is a case.

‘A court of law would decide if he is guilty or not and I am confident there is enough evidence for a prima facie case already and in a perfect world Etzebeth should be brought home to face trial.’

The allegations came after Yorayda Papier-Jansen posted on her social media that her friend had been ‘brutally’ attacked by Etzebeth, his brother Ryen and their group of friends.

She accused the group of pointing a gun, swearing at them and using foul language and shouting at them in Afrikaans: ‘Hotnots, what are you still doing out on the streets.’ 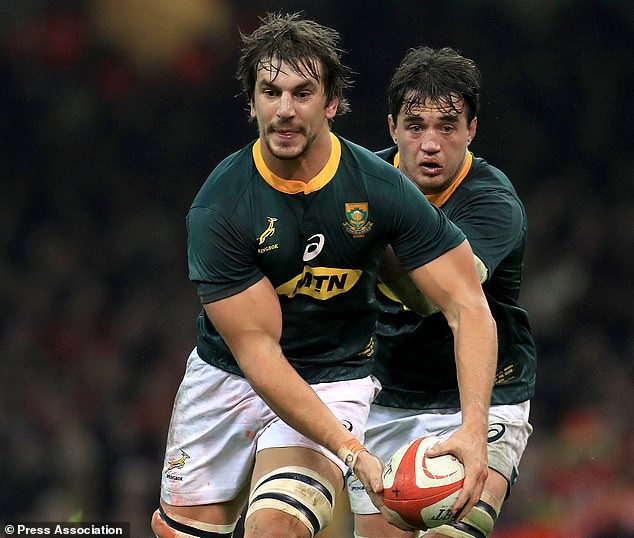 The friend who had been walking Yorayda and her cousin home is shown on the post lying on the floor unconscious, battered and bloodied outside the Die Watergat sports bar.

Yorayda said on her post: ‘Brutally attack while walking me and my Couzens home by Eben Edzebet, [sic] Ryen, Emile and friends calling us hotnots and swearing, this is not on.

‘Gun pointing innocent people and assaulting a poor innocent man who has done absolutely nothing wrong to u. Eben Edzebet [sic] u the biggest racist coz how can u ask Hotnots was suk julle nog op [sic] start and yet you a public figure?’

SA Rugby said in a statement they would co-operate with the authorities in investigating the incident but said he would remain a part of their World Cup team until told otherwise.

Etzebeth will play for French rugby team Toulon after the World Cup having been signed from Cape Town team Stormers on a mega £1m a year deal.