MIDLAND, Texas—America’s hottest oil-drilling regions—such as this one at the heart of the Permian Basin—are seeing their economies soften as shale producers slash spending, leading to emptier hotels, choosier employers and less overtime for workers.

Early this year, demand for the tubing, bolts and valves used in fracking was so high that

oil-field equipment company, RK Supply, in the Midland area was on track to easily beat its annual revenue forecast. But by August, Mr. Daniels had to impose a hiring freeze as customers delayed projects.

Fracking has made the U.S. the world’s top oil producer, buoyed the national economy and helped the country become a net exporter of crude and petroleum products for the first time in decades. But the rapid production growth of recent years is waning as shale companies, many of which have struggled to make money, focus on profits over expansion to satisfy unhappy investors.

“The boom time is done at this point, unless oil prices go up significantly,” said

senior economist at the Federal Reserve Bank of Dallas. 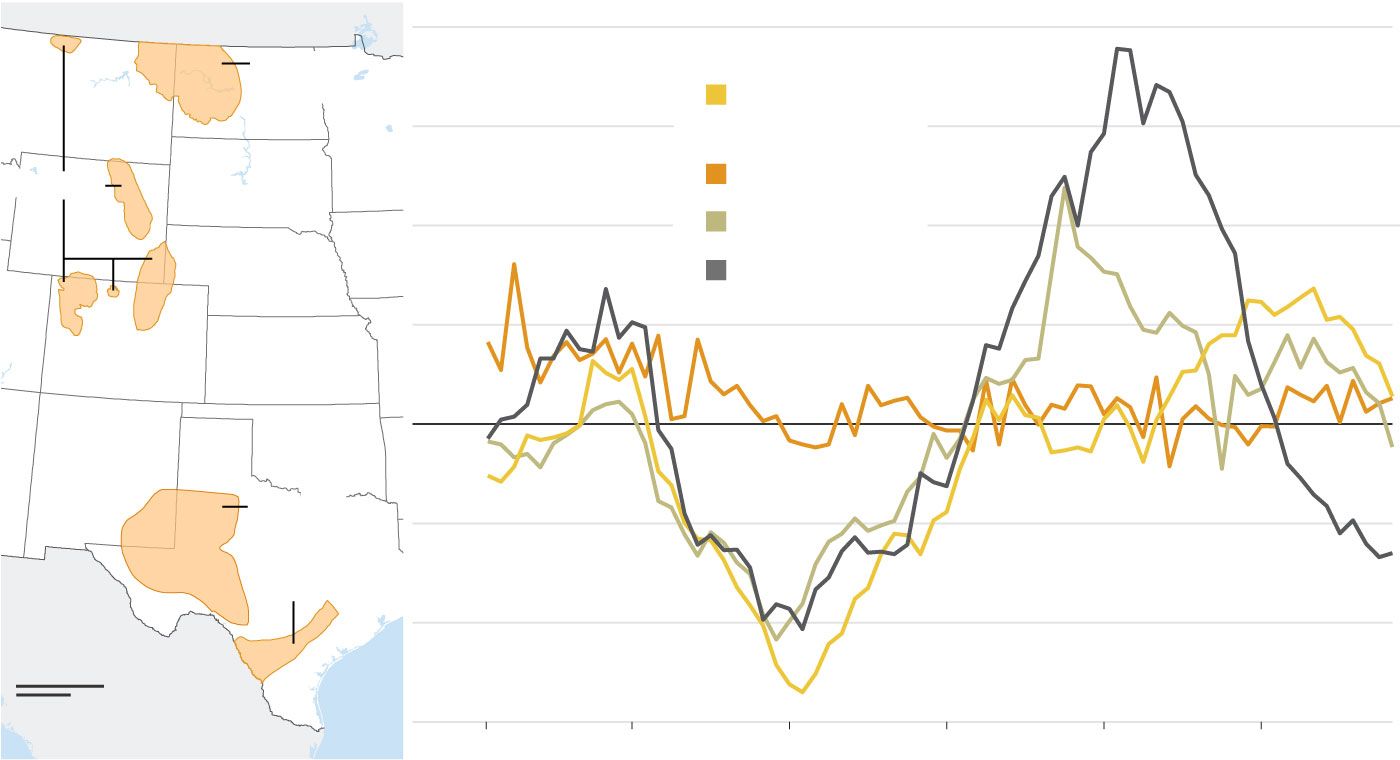 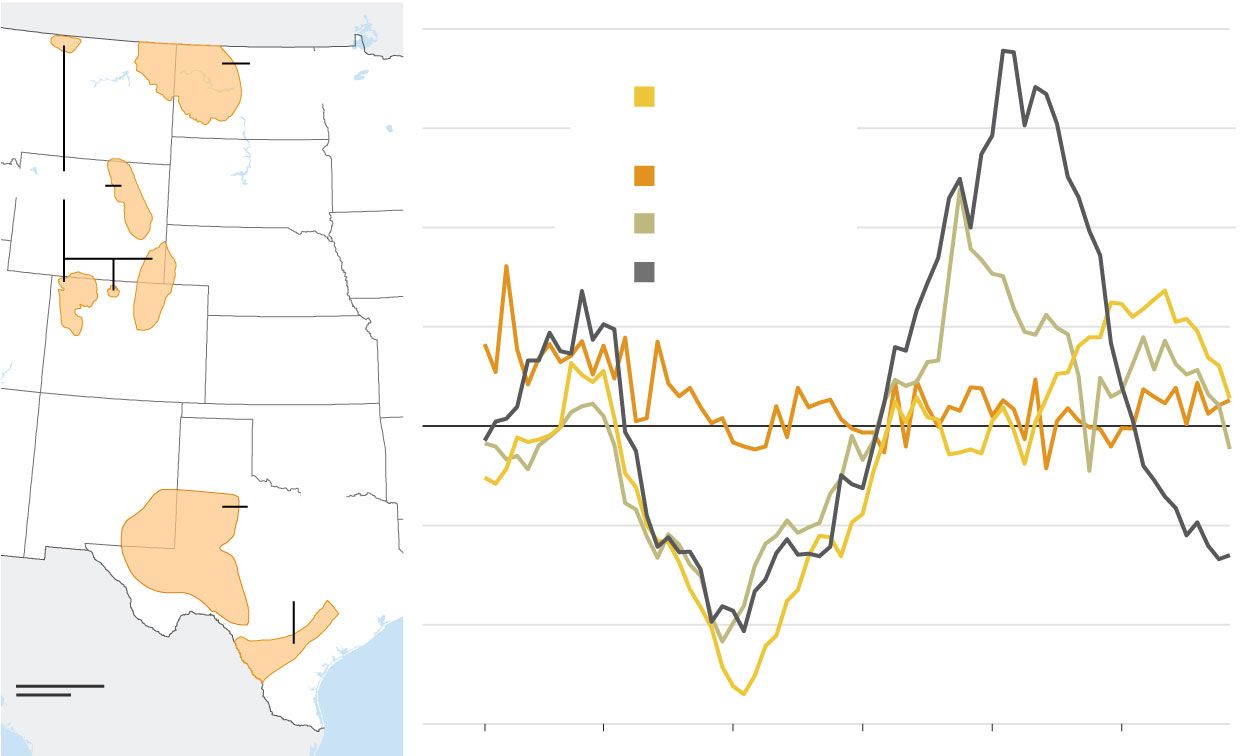 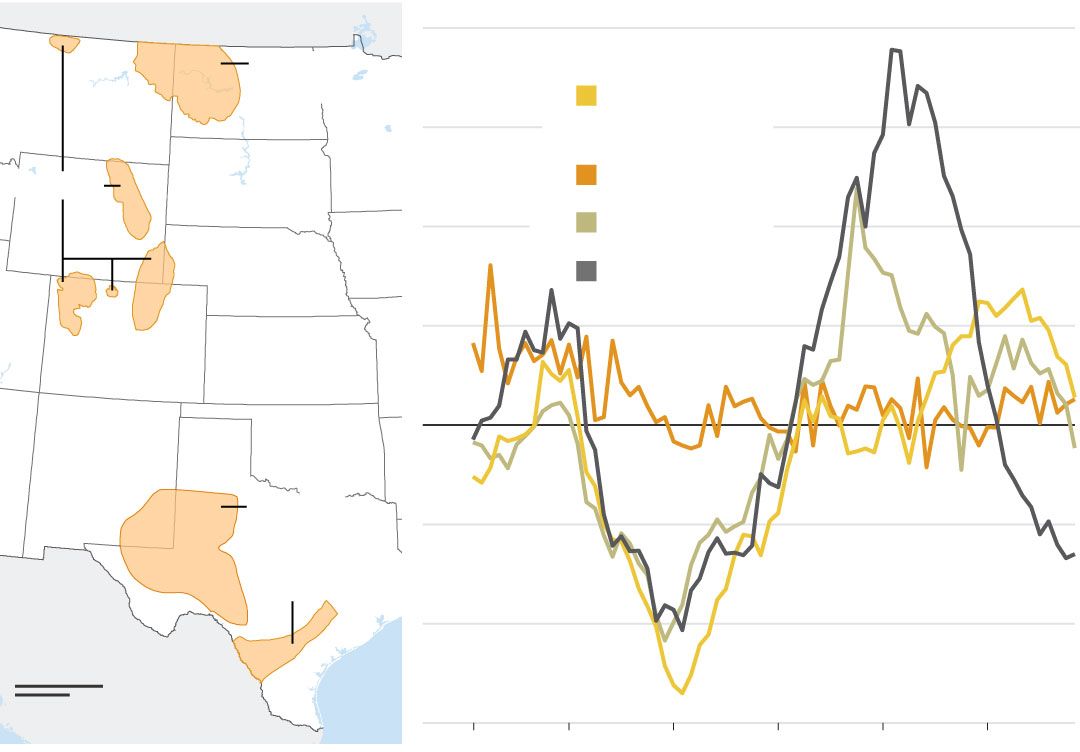 Already, that shift is taking an economic toll. National nonresidential fixed investment—which tracks spending on software, research and development, equipment and structures—fell at an annualized rate of 2.66% in the third quarter and 1.01% in the second quarter, due in large part to declines in oil and gas spending, according to the Dallas Fed.

Spending is expected to decline further next year. North American shale investment, or spending on drilling and fracking, is forecast to fall about 6% this year, then tumble another 14% in 2020, adjusted for inflation, according to energy analytics firm Rystad Energy.

Companies also are trimming jobs, leading to a 5% decline in seasonally adjusted oil-field service employment in the 12 months ended in October, according to Bureau of Labor Statistics data.

In Texas, the nation’s top oil-producing state, energy industry employment has dropped at an annualized rate of 2.1% through September, Dallas Fed data show. Such granular figures weren’t available in other oil-producing states, but BLS data show that in North Dakota, seasonally adjusted employment in mining and logging, which includes the oil-and-gas industry, fell about 9% from January through October. Employment has been steadier in Colorado and New Mexico.

The changes are evident in the Permian, the region straddling Texas and New Mexico that has been the heart of the fracking boom. Trucks carrying sand, water and crude still clog the highways, new homes continue to be built, and regional unemployment was 2.4% in October, up from a recent low of 1.9% in April but below the national average of 3.3%, not seasonally adjusted, according to the Texas Workforce Commission.

Still, oil-and-gas workers have begun to see their hours cut, and hotel occupancy in Midland has fallen 14% through the first 10 months of the year from a year earlier, according to hospitality benchmarking firm STR Inc. Occupancy had tightened during the boom, leading to high prices and a building frenzy throughout the Permian. The average cost of a room in Midland was about 55% higher last year than in 2017, STR data show.

a supervisor for a bulk fuel supplier, the softness has meant that his company doesn’t have to worry as much about employee turnover.

“In the past, we were just getting every warm body we could,” Mr. Urteaga said at a recent cookout in Midland. “Because it’s leveled off some, we’re able to check references, make sure guys have the experience they’re putting on their résumés.”

The slowdown is unusual because it hasn’t been driven by a sharp decline in crude prices, which have hovered around $57 a barrel this year. Rather, U.S. oil producers are paring growth and spending largely because many have struggled mightily to generate returns for shareholders and are facing tightening access to capital. Including reinvested dividends, a broad index of U.S. oil-and-gas companies has fallen about 47% in the past three years as the S&P 500 index soared roughly 49%, according to FactSet.

“Investors are playing a large role here, and that’s the biggest driver of this cycle,” said

which specializes in hydraulic fracturing. Companies such as Liberty that provide services or parts to shale producers have been among the hardest-hit by the pullback.

In Hobbs, N.M., just 5 miles from the Texas border,

who owns Shiloh Machine, is seeing customers that used to consistently pay him within 60 days wait 90 or 100 days to do so. Meanwhile, the pile of tubing and other tools that companies have asked the machinist to repair is dwindling.

“There is a crunch on our cash,” Mr. Mattingly said. He recently asked employees to stop working overtime, a key source of income in oil boomtowns, where costs run high and housing can be difficult to find.

On the Texas side of the Permian,

is planning to go back to school in January for welding, after seeing his weekly hours at a pipe-inspection company fall to about 50, from more than 80 earlier this year.

“You’ve got to pay attention a lot more to your spending,” said Mr. Chaffin, 34 years old, who has cut back on expenses such as new clothes and eating out.

Are you concerned about a shale slowdown at all? Why or why not? Join the conversation below.