Scientists prepared Thursday to embark on an unprecedented, years-long mission to explore the Indian Ocean and document changes taking place beneath the waves that could affect billions of people in the surrounding region over the coming decades.

The ambitious expedition will delve into one of the last major unexplored frontiers on the planet, a vast body of water that’s already feeling the effects of global warming.

Understanding the Indian Ocean’s ecosystem is important not just for the species that live in it, but also for an estimated 2.5 billion people at home in the region – from East Africa, the Arabian peninsula, South and Southeast Asia.

Final preparations were being made Thursday for the start of an unprecedented, years-long mission to explore the Indian Ocean, during which scientists hope to document changes taking place beneath the waves that could affect billions of people in the surrounding region

The Nekton Mission, supported by over 40 organizations, will conduct further dives in other parts of the Indian Ocean over three years.

The research will contribute to a summit on the state of the Indian Ocean planned for late 2021.

The Ocean Zephyr is preparing to leave Bremerhaven, Germany, on the first leg of trip.

Researchers will spend seven weeks surveying underwater life, map the sea floor and drop sensors to depths of up to 2,000 meters (6,560 feet) in the seas around the Seychelles.

Little is known about the watery world below depths of 30 meters (100 feet), which scientists from Britain and the Seychelles will be exploring with two crewed submarines and a remotely operated submersible in March and April. 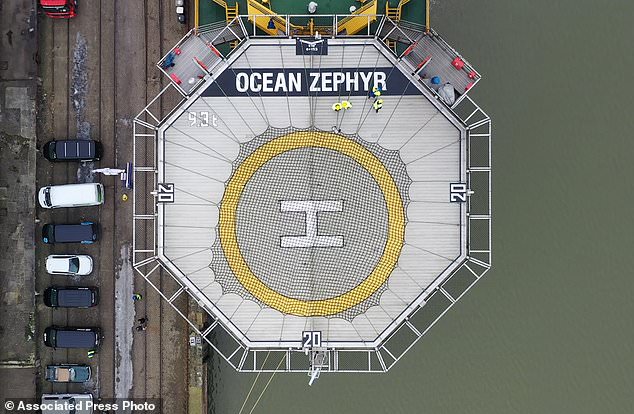 Above, people stand on the helipad of Ocean Zephyr in the docks in Bremerhaven, Germany. The Britain-based Nekton Mission will use submarines to go 300 meters below the surface and sonar equipment to survey depths of up to 2,000 meters

Ronny Jumeau, the Seychelles’ ambassador to the United Nations, said such research is vital to helping the island nation understand its vast ocean territory. 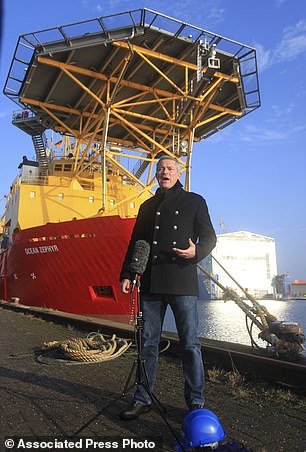 Oliver Steeds, head of the Nekton Mission is interviewed in front of the Ocean Zephyr in the docks in Bremerhaven, Germany

Jumeau said the Seychelles aims to become a leader in the development of a ‘blue economy’ that draws on the resources of the ocean.

The archipelago relies on fishing and tourism, but has lately also been exploring the possibility of extracting oil and gas from beneath the sea floor.

‘Key to this is knowing not only what you have in the ocean around you, but where it is and what is its value,’ he said.

‘It is only when you know this that you can properly decide what to exploit and what to protect and leave untouched.’

‘Research expeditions such as the Nekton Mission are therefore vital to help us fill those gaps and better know our ocean space and marine resources to make wise decisions in planning the future of our blue economy,’ Jumeau added.

The island nation of fewer than 100,000 people is already feeling the effects of climate change, with rising water temperatures bleaching its coral reefs. 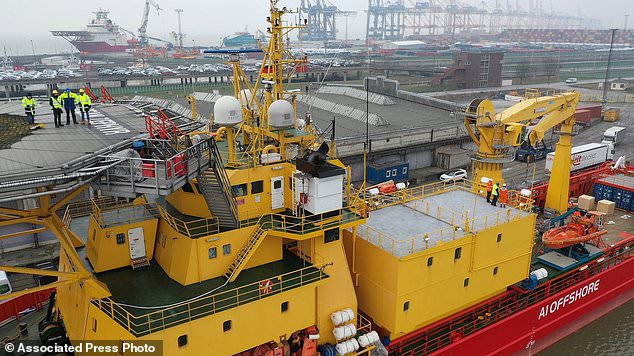 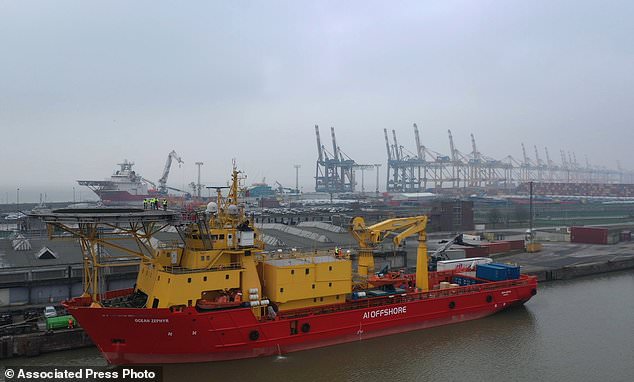 Researchers will spend seven weeks surveying underwater life, map the sea floor and drop sensors to depths of up to 2,000 meters (6,560 feet) in the seas around the Seychelles

‘Our ocean is undergoing rapid ecological transformation by human activities,’ said Callum Roberts, a marine conservation biologist at the University of York, England, who is a trustee of the mission.

‘Seychelles are a critical beacon and bellwether for marine conservation in the Indian Ocean and globally,’ he said.

HOW MUCH WILL SEA LEVELS RISE IN THE NEXT FEW CENTURIES?

Global sea levels could rise as much as 1.2 metres (4 feet) by 2300 even if we meet the 2015 Paris climate goals, scientists have warned.

The long-term change will be driven by a thaw of ice from Greenland to Antarctica that is set to re-draw global coastlines.

Sea level rise threatens cities from Shanghai to London, to low-lying swathes of Florida or Bangladesh, and to entire nations such as the Maldives.

It is vital that we curb emissions as soon as possible to avoid an even greater rise, a German-led team of researchers said in a new report.

Targets set by the accords include cutting greenhouse gas emissions to net zero in the second half of this century.

In addition, water naturally expands as it warms above four degrees Celsius (39.2°F).

The report also found that every five years of delay beyond 2020 in peaking global emissions would mean an extra 20 centimetres (8 inches) of sea level rise by 2300.

‘Sea level is often communicated as a really slow process that you can’t do much about … but the next 30 years really matter,’ lead author Dr Matthias Mengel, of the Potsdam Institute for Climate Impact Research, in Potsdam, Germany, told Reuters.

None of the nearly 200 governments to sign the Paris Accords are on track to meet its pledges.

The mission’s principal scientist, Lucy Woodall of Oxford University, said the researchers expect to discover dozens of new species, from corals and sponges to larger creatures like types of dog-sharks.

The Associated Press is accompanying the expedition and will provide live underwater video from the dives, using new optical transmission technology to send footage from the submarines to the ship and from there, by satellite, to the world