How rising seas will sink COUNTRIES: Scientists calculate that current satellite-based predictions are wrong and three times as many people will be hit by rising shore lines by 2050

New estimates from scientists suggest that three times as many people could be affected by rising seas than previously thought.

According to a paper published in Nature Communications on Tuesday, new models show that 300 million are currently living on land that will flood at least once a year by 2050.

This eclipses a former estimate from NASA which projected 80 million people were currently at risk.

The new estimates eclipse projections from NASA which previously put the number of people at risk of floods at 80 million. New models say as many as 300 million people are at risk

A revamped model, which more accurately takes into account land elevation using satellite readings and artificial intelligence, portends that swaths of countries like Vietnam and India will be under water by midcentury.

According to researchers, the new estimates came as a shock even for them, given their dramatic difference from previous tallies.

‘These assessments show the potential of climate change to reshape cities, economies, coastlines and entire global regions within our lifetimes,’ Scott Kulp, the lead author of the study and a senior scientist at Climate Central told The Guardian.

At-risk areas include large portions of heavily populated cities like Mumbai, which is home to more than 18 million people and could be almost entirely underwater in the next 30 years.

Models show the worst effects could be seen across Asia where countries like India saw a sevenfold increase in the number of people set to be affected by annual floods, and China which saw a threefold increase.

The threat isn’t reduced to Asia, however. In the UK, 3.5 million people could be at risk of flooding by 2050 according to their estimates.

The US wasn’t among the most affected areas according to the researchers, but previous estimates have shown that dozens of cities across the country’s coastal regions could soon be submerged, especially in states like New Jersey and Florida. 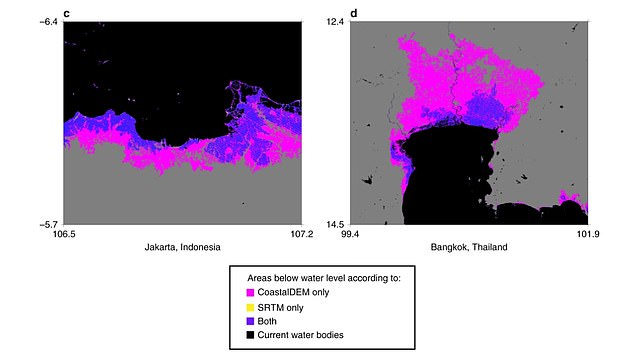 Both Jakarta and Bangkok are also set to be affected by rising tides. Given how densely populated those cities are, the rise could displace millions 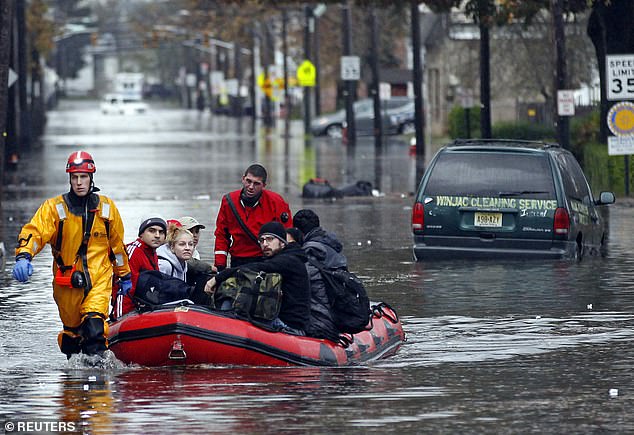 Flooding during Hurricane Sandy in New Jersey is shown above, from 2012

While the projection is significantly worse than previous models, researchers note that the disconcerting results may still get worse.

According to them, models are dependent on an increasingly volatile Antarctic ice sheets which continues to hemorrhage ice into the sea.

Scientists say that if conditions there worsen, as many as 640 million people could be threatened by rising tides by 2100.

The estimates are also based on countries keeping stride with emission reductions outlined by the Paris Agreement – benchmarks  which have continually gone unmet.

Likewise, estimates of the financial impact could also be much greater than previously thought.

As noted by The Guardian, World Bank data that projected the cost of climate change globally to be about $1 trillion per year were based on former models.

WHAT DO EXPERTS PREDICT FOR THE FATE OF THE PLANET’S PLANTS AND ANIMALS?

Nature is in more trouble now than at any time in human history with extinction looming over one million species of plants and animals, experts say.

That’s the key finding of the United Nations‘ (UN) first comprehensive report on biodiversity – the variety of plant and animal life in the world or in a particular habitat.

The report – published on May 6, 2019 – says species are being lost at a rate tens or hundreds of times faster than in the past.

Many of the worst effects can be prevented by changing the way we grow food, produce energy, deal with climate change and dispose of waste, the report said.

– Turning forests, grasslands and other areas into farms, cities and other developments. The habitat loss leaves plants and animals homeless. About three-quarters of Earth’s land, two-thirds of its oceans and 85% of crucial wetlands have been severely altered or lost, making it harder for species to survive, the report said.

– Permitting climate change from the burning of fossil fuels to make it too hot, wet or dry for some species to survive. Almost half of the world’s land mammals – not including bats – and nearly a quarter of the birds have already had their habitats hit hard by global warming.

– Polluting land and water. Every year, 300 to 400 million tons of heavy metals, solvents and toxic sludge are dumped into the world’s waters.

– Allowing invasive species to crowd out native plants and animals. The number of invasive alien species per country has risen 70 per cent since 1970, with one species of bacteria threatening nearly 400 amphibian species.

This sprayable gel could prevent wildfires from catching hold here