Russia‘s space programme is contemplating building a web of interconnected remote-controlled satellites to monitor activity on the Earth in real time.

Dubbed Sovereign’s Eye – ‘Gosudarevo Oko’ – it would be used in agriculture and by the emergency services, Roscosmos’s chief has claimed.

Sovereign’s Eye will also help improve educational and IT infrastructure, as well as cybersecurity and research, its creators say.

Russia launched more than 25 satellites into orbit last year, taking the nation’s total amount of civilian and military satellites to 146, according to the UN.

This included the successful launch of two Canopus-V remote sensing satellites, which launched in December.

These are equipped with precision cameras with a broad spectral range, which – alongside visible light – may include ultraviolet and infrared wavelengths.

They will capture take resolution images of Earth’s surface from more than 310 miles (500km) above.

Four more of these satellites are expected to be operational by 2020.

He said: ‘We have presented a new project which we consider promising.

‘After a successful launch from the Vostochny spaceport in December, we have reinforced the group of Earth remote sensing satellites.

‘We are suggesting a project called “Sovereign’s Eye” so that we can see the dynamics of any processes on Earth.’

Sovereign’s Eye will increase the monitoring capabilities of civilian agencies, it is claimed.

That would include Russia’s Ministry of Emergency Situations and allow the government to deploy firefighting aircraft to within 15 miles (25km) of a fire.

Arable land, which covers vast swathes of Russia, would also be monitored by the network of satellites. 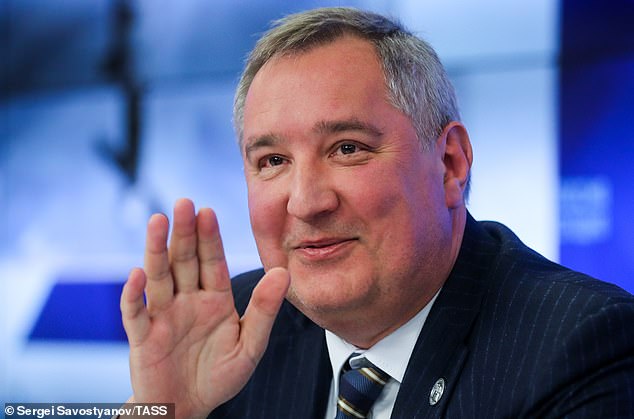 Roscosmos chief Dmitry Rogozin (pictured) revealed the idea at a press conference. He said: ‘We are suggesting a project called “Sovereign’s Eye” so that we can see the dynamics of any processes on Earth’

Large and developing infrastructure projects would also have the ability to be monitored from space.

Rogozin said: ‘This would assist authorities tremendously. All buildings and changes to infrastructure will be visible from space.

‘We will offer Gazprom, Rosneft, Lukoil, Russneft and others the ability to remotely control the facilities which they build, whether inside Russia or abroad,” the official said, according to Sputnik News.

Other uses of the prospective technology would include determining the depth of a pit or a mine.

The Soyuz programme is an ongoing human spaceflight programme which was initiated by the Soviet Union in the early 1960s, originally part of a Moon landing project.

There have been 138 manned missions, of which 11 have failed and one astronaut has died.

Here are some of the notable failures, including one in 1967 when an astronaut was killed, one in 1975 when two astronauts hurtle to Earth.

1967: Soviet astronaut Vladimir Komarov was killed during landing due to a parachute failure

1975: Two Russian astronauts had to abort a mission to a Russian space station at an altitude of 90miles due to a rocket failure.

They hurtled towards Earth and safely landed in the Altai Mountains on the Russia-China border.

One of the astronauts never flew to space again, never fully recovered from the accident and died aged 62 in 1990. The other made two more flights.

1983: A rocket malfunctioned during the countdown to take off in southern Kazakhstan.

Automatic systems ejected the two Russian crew-members just seconds before the rocket exploded. The fire burned on the launch pad for 20 hours.

2002: A Soyuz ship carrying a satellite crashed during launch in Russia when a booster suffered an engine malfunction. The ship landed near the launch pad, killing one engineer on the ground.

2011: A Soyuz-U mission carrying cargo failed to launch to the International Space Station when the upper stage experienced a problem and broke up over Siberia.

2016: Another cargo ship was lost shortly after launch, likely due to a problem with the third stage of the Soyuz-U.

August 2018: A hole in a Soyuz capsule docked to the International Space Station caused a brief loss of air pressure and had to be patched.

The Russians claimed the hole was drilled deliberately in an act of sabotage either on Earth or in orbit. Another theory is that the hole was a production defect.

Turtle embryos evolved to choose sex and inoculate themselves against climate...