A motorcycle accident left a racing fanatic paraplegic and in an induced coma for a week.

Tanner Arbuthnot, now 25, of Washington, was riding his motorbike on January 30 2016 when a truck pulled out and hit him head on.

Pinned between his motorcycle and the truck, the then 22-year-old suffered a brain bleed, shattered vertebrae, spinal cord injury, collapsed lungs, and broken wrists, legs and ankles.

With doctors telling Mr Arbuthnot’s family to say goodbye, he pulled through and endured 13 life-saving surgeries in just one month, including an eight-hour blood transfusion when he first arrived at hospital.

Mr Arbuthnot also spent a week in a coma and, upon waking, was forced to make the heartbreaking choice between having his left leg amputated from the knee down or keeping it, and risking infection and life-threatening blood loss.

Choosing to have his leg amputated, Mr Arbuthnot is now an incomplete paraplegic. 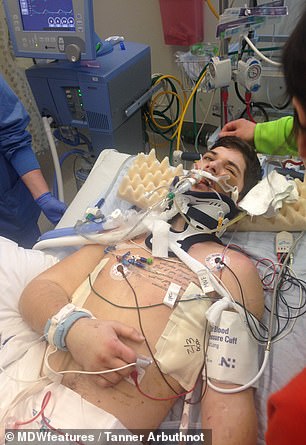 Tanner Arbuthnot, who is paraplegic, opted to have his left leg amputated below the knee following a motorcylce accident. He is pictured left after the ordeal with his girlfriend at the Grand Canyon. Right shows the then 22-year-old in a medically-induced coma for a week 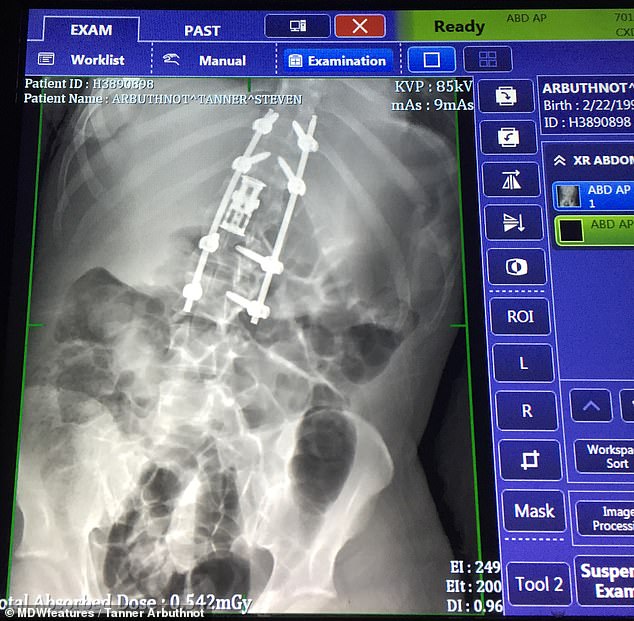 Once in hospital, doctors set about trying to save Mr Arbuthnot’s life, which included surgery to remove a vertebra and then fuse his spine back together (pictured in the X-ray)

The force of the collision caused the back wheel of Mr Arbuthnot’s motorcycle to lift up and hit his head.

Mr Arbuthnot’s body then folded backwards and he was pinned between the two vehicles.

‘Right before the accident, I had let go of the handle with my left hand and glanced over at a house nearby. Then it goes black.

‘When I hit the truck, I hit it head first, then the back tyre of the bike hit my head due to the weight and force of the bike.

‘It folded me in half backwards and pinned me between it and the truck.’ 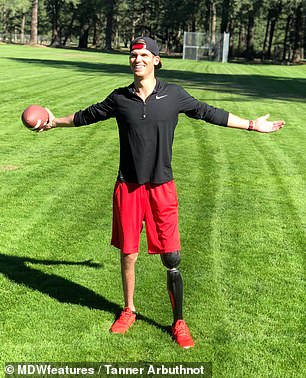 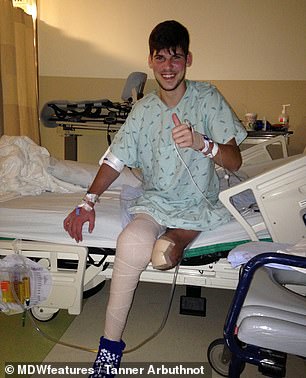 Mr Arbuthnot has learned to stand and walk on a prosthetic limb (pictured left), and has feeling at the top of his thighs. He opted for the amputation (pictured right after) when doctors warned failing to do so carried a risk of infection and life-threatening bleeding 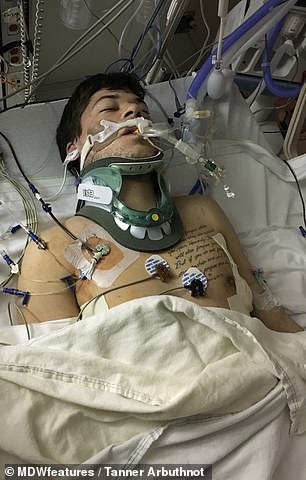 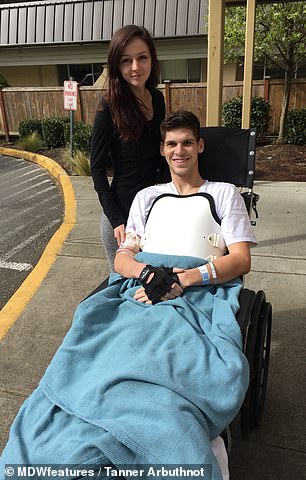 Pictured left in the induced coma, Mr Arbuthnot’s family were told to say goodbye, but he shocked everyone with his recovery. Mr Arbuthnot is pictured right with his girlfriend after surgery to have his vertebrae fused – one of 13 life-saving operations he endured

Once in hospital, doctors set about trying to save Mr Arbuthnot’s life, which included surgery to remove a vertebra and then fuse his spine back together, leaving him with a five-degree curvature of the spine.

‘It honestly damaged me from head-to-toe,’ he said.

‘I was overseen by some of the world’s best doctors who were telling me I was going to die or never walk or drive again.

‘I had a brain bleed, multiple fractures in the neck, shattered vertebrae that was removed and replaced with a metal cage, a spinal cord injury making me a complete paraplegic.

‘I tore three inches from my femoral artery, had two collapsed lungs, shattered ribs, broken clavicle, broken wrists, paralysed right hand, tore every ligament in my knee, both legs broken, both tibias broken, broken ankles and a degloving injury on my left thigh.’

Mr Arbuthnot surprised everyone with his impressive recovery.

‘As time went on, I made it through more and more surgeries and kept pushing to live,’ he said.

‘I had multiple life-saving surgeries and they added up to 13 in the first month.

‘I had an eight-hour blood transfusion for 14 units of blood to save my life the first night.’

Mr Arbuthnot was then put into a medically-induced coma and woke to be faced with a life-changing decision.

‘They woke me up to decide whether to amputate or risk infection and potentially not surviving due to blood loss from the artery damage,’ he saidm.

‘So, at 22 years old, still not really knowing what was going on, I had to make the hardest decision of my life and give them permission to cut my leg off.’ 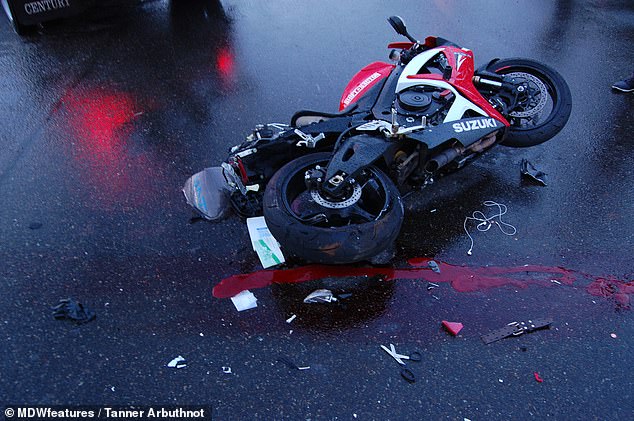 Mr Arbuthnot was riding his motorcycle (pictured after the collision) when a truck pulled out and hit him head on. The back wheel flipped up and hit his head. Mr Arbuthnot’s body then ‘folded backwards’, ‘pinning’ him between the truck and his motorbike 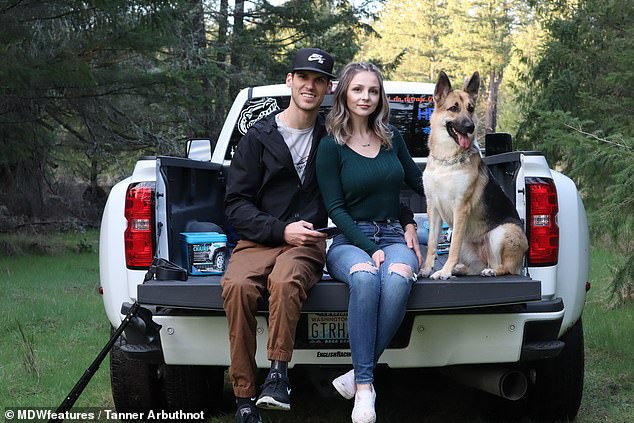 Following his amputation on February 9 2016, Mr Arbuthnot was forced to adapt to life as a paraplegic.

Working hard in physiotherapy, he taught himself to stand and walk on a prosthetic limb, and can even feel the tops of his thighs.

‘Every time they tell me something’s impossible, I roll away and accomplish that thing shortly after just to prove to myself,’ he said.

‘Half the stuff I learned to do, like standing on my own, I taught myself while hiding from hospital staff in my bathroom because it “wasn’t safe to try” according to them.

‘I have feeling on the top of my thighs, and recently had some amazing new improvement in my inner shin.

‘I don’t have much but I have about an inch worth of feeling which is great.’ 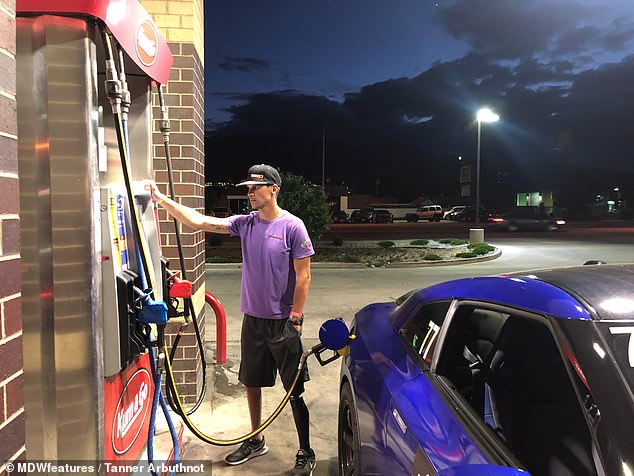 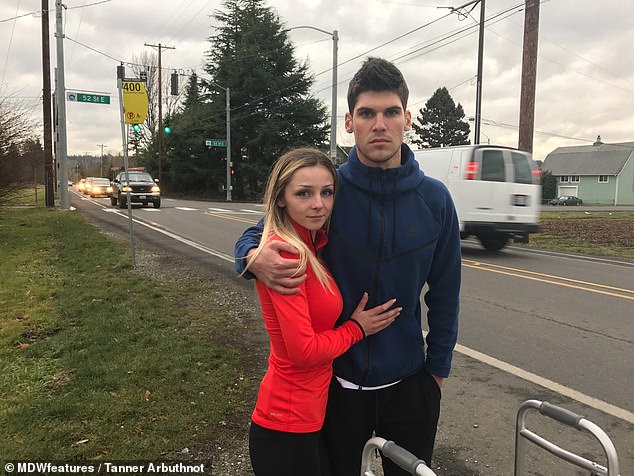 Mr Arbuthnot (pictured with his girlfriend) has a blurred memory of the collision but still endures flashbacks of the events leading up to it, which was ‘hard’ for him to move on from

Despite his can-do attitude, the ordeal took its toll on Mr Arbuthnot.

‘I was 23 and all my friends were out enjoying life while I couldn’t get out there yet,’ he said.

‘Learning to live as a paraplegic is never-ending.

‘It’s scary and this new lifestyle was so complicated with all the crazy injuries around my paralysis – I just didn’t know what to do.

‘There’s no one like me that I know of with the combination of injuries, so I felt alone in that part of my recovery which was hard.’

Although his memory of the collision is blurred, Mr Arbuthnot still endures flashbacks.

‘I’ve had a flashback on the road while driving recently when a truck almost pulled out in front of me though,’ he said.

‘I remembered it catching my attention moving out in front of me.

‘That short clip has been hard to move past mentally.’

But the ordeal has taught Mr Arbuthnot how mentally strong he is.

‘Throughout it all I’m proud to say I’ve had a smile on my face and enjoy being alive,’ he said.

‘I got so close to not coming back so many times, I stopped breathing from the pain for a time in the hospital even, so I truly enjoy and appreciate this second chance at life.’

Mr Arbuthnot has since launched Second Chance Racing so he can continue the motorsport he loves.

‘I’ve been blessed to be able to inspire many across the globe and I just want to continue to help others that didn’t have the support I had,’ he said.

‘I’m racing and transporting cars across the country.

‘It’s been something to look forward to and give me confidence to get out there and show others nothing can hold you back.’

Mr Arbuthnot is speaking out to encourage others who have been through tough times.

‘If you have a dream, if you’re in recovery or if you don’t think you can make it out of something, you always can,’ he said.

‘Enjoy life and do what you love, you never know what could happen tomorrow.’

‘It’s very hard to tell parents their child is no more’,...