But Tesco‘s Vegetable Lasagne has almost four times less, with 6.2g per serving – and is even slightly bigger 450g.

Government officials recommend that people cut down on saturated fat because it is bad for heart health.

Each of the upmarket ready meals analysed had more than 5g of saturated fat per 100g – which the NHS rules as too high.

And obesity campaigners warn many customers won’t be aware of how unhealthy their dinner is. 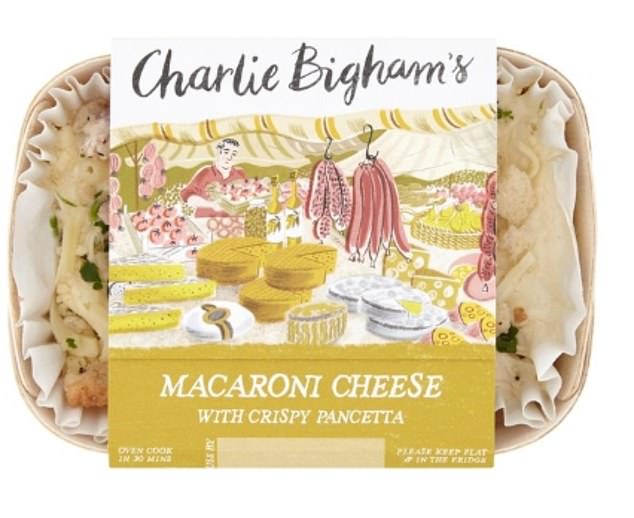 Charlie Bigham’s Macaroni Cheese with Pancetta has 23.5g of saturated fat per portion

Of the twelve dishes analysed, COOK, Charlie Bigham’s and Gourmade had a higher proportion of fat every time.

The macaroni cheese option with the lowest saturated fat content per portion was Sainsbury’s Macaroni Cheese 375g, with 12.6g, and costing only £1.85.

Gourmade Macaroni Cheese and Bacon 350g, costing more than double the price (£4.50) has a whopping 30.1g of saturated fat.

Beef lasagne is a popular choice when in need of a speedy dinner. Waitrose and Partners’ Beef Lasagne has 9.2g of saturated fat per 400g portion.

Double that amount is found inside Charlie Bigham’s Lasagne For One, with 18.8g of saturated fat in a smaller 335g portion.

Vegetarians may choose to go meat-free believing the meals to be ‘healthier’.

But the beef options from Waitrose and Sainsbury’s have almost three times less saturated fat than COOK’s veggie lasagne.

He told MailOnline: ‘Customers don’t read the labels. If people did, they would shun the food which is excessive in fat, sugar and salt.

‘The problem is, the ready meals with high saturated fat and lots of sugar are more tasty, but worse for health.’

Mr Fry said it’s the Government’s responsibility to control how much people are eating amid an obesity epidemic.

He said: ‘The companies will say, “We put the stuff on the label and we assume they will be eaten rarely”. That gets them off the hook.

‘You can’t blame the companies – they need to sell. What there needs to be is regulation of the quantities in each product.

‘The government really needs to start saying to the food industry that they can’t put in too much of this or that unhealthy ingredient.’

Saturated fat is a natural form of fat found in meats, butter and cheese. It differs from unsaturated fat in the way chains of fatty acids are joined together.

Eating a lot of saturated fat can increase cholesterol levels in an unhealthy way and increase someone’s risk of developing heart disease.

This is because the cholesterol builds up on the walls of the arteries, narrowing them and increasing pressure on the heart while restricting blood and oxygen flow.

Current guidelines say saturated fat should make up no more than 10 per cent of an adult’s daily calorie intake, which is about 200 to 250 calories of the average adult’s 2,000–2,500 intake.

Dietician Clare-Thornton Wood told The Sun: ‘Many of those in what might be considered the premium category are amongst the highest scoring in terms of fat, sugar, salt and calories.

‘The premium products often contain butter and cream, presumably for flavour, but there are other healthier options that could be substituted with olive oil, reduced fat creme fraiche or mascarpone.’

Charlie Bigham, founder of Charlie Bigham’s, said: ‘We are focused on creating really delicious, top quality dishes and will never compromise on our commitment to great taste.

‘To achieve this, our recipes are cooked as if you were preparing them at home, using fresh and authentic ingredients which are carefully sourced from our long-term, trusted suppliers. We avoid using artificial flavours, colours and preservatives and don’t use the highly processed techniques used by some companies producing food on a mass scale.

‘Across our full range over 50 different recipes, all our ingredients and nutritional values are clearly labelled on pack and on our website to allow consumers to make an informed choice.

‘Intended to be enjoyed as part of a balanced diet, our meals offer the perfect solution to a night off from cooking without having to compromise on taste and quality.

‘We believe this is what our consumers are looking for as they often get in touch to say how much they appreciate our unique approach to pre-prepared food.’

HOW DO YOU READ A NUTRITION LABEL?

The vast majority of packaged foods in the UK come with nutritional information printed on the label.

The main things to look for are fat, saturated fat, salt (which may be called sodium), fibre and sugar – which is often listed as ‘of which sugars’ beneath carbohydrates.

Some supermarkets also label nutritional value with a traffic light system, in which more green points to healthier food.

The NHS advice on what is high or low is as follows:

An adult’s recommended daily allowance (RDA) of fat is around 70g.

High: more than 5g of saturated fat per 100g

An adult’s RDA of saturated fat is around 20g.

Sugars (aka of which sugars)

An adult’s RDA of sugars is around 90g.

An adult’s RDA of salt is 6g or less.

The Pandemic Situation Has Benefited the Crypto Industry

Man Utd, Liverpool, Arsenal and Chelsea to be impacted by new...

Cancer patient, 81, is left with a three-month ‘erection’