Boris Johnson has rejected a plea from footballer Marcus Rashford to extend free school meals for 1.3million children for six weeks through the summer holidays, it was revealed today.

The Prime Minister will instead write to the Manchester United and England striker about what the Government is doing to make sure vulnerable children do not go hungry.

Mr Rashford, 22, has helped to supply three million meals, raising around £20million along with charity FareShare during lockdown.

He has petitioned the Government to continue providing free meals for children during the school holidays and told BBC Breakfast this morning: ‘It’s written from the heart and it’s about how my life was at the moment – the letter is to open up and let people understand the impact on families and to know I’ve done the right thing’.

Marcus and his four siblings were all on free school meals while growing up.

He added: ‘What families are going through now, I’ve once had to go through that – and it’s very difficult to find a way out. It’s very important for me to help people who are struggling. Whether the outcome changes or doesn’t change – that’s why I wrote it.’

But barring a U-turn from the Prime Minister his plea has not worked. A Department for Education spokesman said: ‘Free schools meals are ordinarily term time only, and the national voucher scheme will not run during the summer holidays.’ 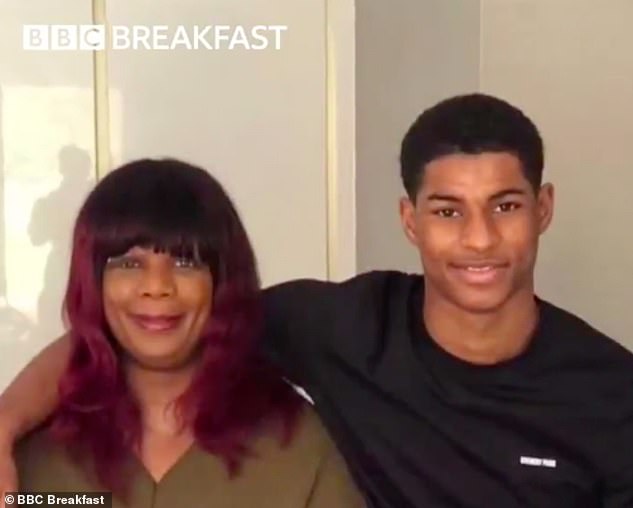 ‘Thousands of children will also receive additional support through our Holiday Activities and Food programme, which offers activities and free meals throughout the summer holidays,’ they added. 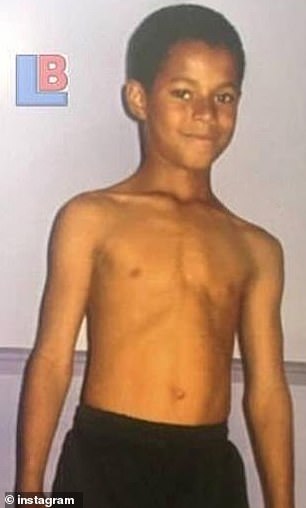 Marcus, pictured as a little boy, and his four siblings were all on free school meals while growing up

Boris Johnson will instead reply to the footballer by letter, Number 10 has said.

The Prime Minister’s official spokesman said: ‘The PM will respond to Marcus Rashford’s letter as soon as he can – he has been using his profile in a positive way to highlight some very important issues.’

A food voucher scheme was set up to make sure children on free school meals would be fed during lockdown after schools shut in March.

Vouchers worth £15 were given to families each week in supermarkets.

But the scheme is set to end next month. In a letter to the House of Commons, the Manchester United forward wrote: ‘Political affiliations aside, can we not all agree that no child should be going to bed hungry?

‘The Government has taken a ‘Whatever it takes’ approach to the economy – I’m asking you today to extend that same thinking to protecting all vulnerable children across England.

‘I encourage you to hear their pleas and find your humanity. Please reconsider your decision to cancel the food voucher scheme over the summer holiday period and guarantee the extension. This is England in 2020, and this is an issue that needs urgent assistance.

‘Please, while the eyes of the nation are on you, make the U-turn and make protecting the lives of some of our most vulnerable a top priority.’ 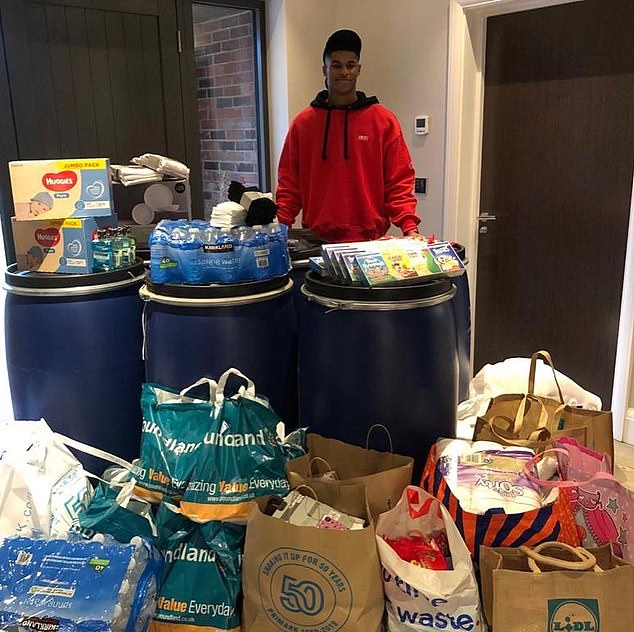 As the coronavirus crisis hit, Marcus Rashford felt obligated to do something to help the young and potentially vulnerable children who may begin to suffer without free school meals 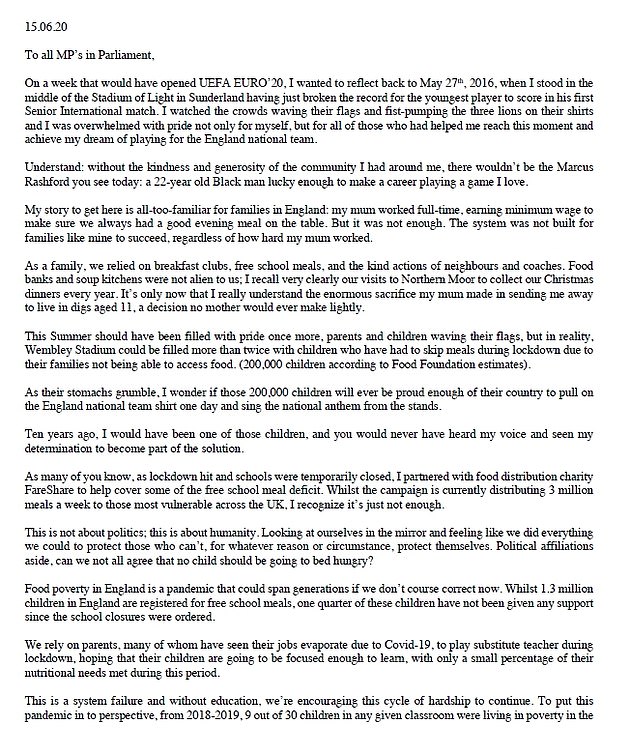 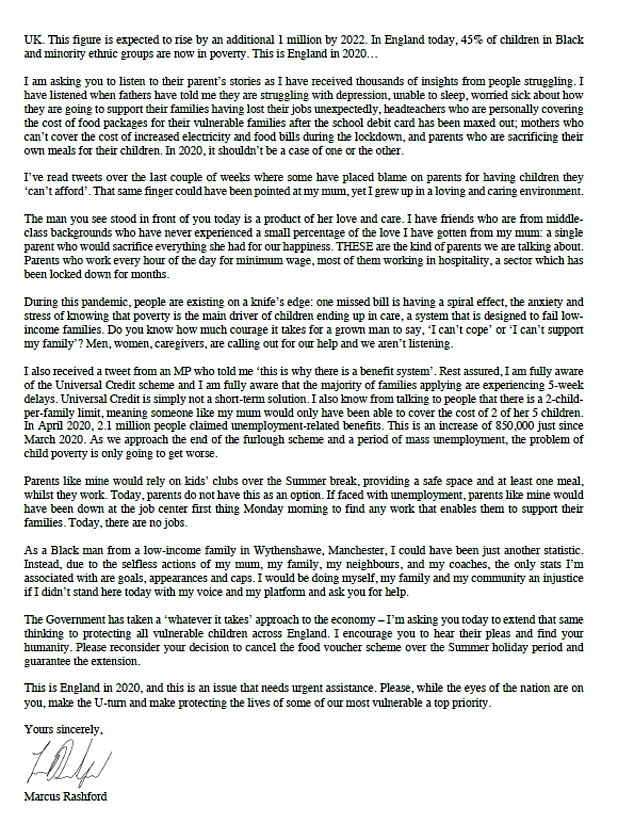 Rashford relied on breakfast clubs and free school meals while growing up in Manchester. He wrote: ‘As a black man from a low-income family… I could have been just another statistic.

‘I would be doing myself, my family and my community an injustice if I didn’t stand here today with my voice and my platform and ask you for help.’

Geoff Barton, general secretary of the Association of School and College Leaders, said: ‘If the Government is genuinely committed to social equity, it must extend the provision of free school meals to continue during the summer holidays.

‘Disadvantaged families are likely to have been hardest hit by the coronavirus crisis, and the very least we can do as a society is ensure that children from these backgrounds have something to eat.’

Former education secretary Justine Greening also backed the footballer’s demands. She said: ‘I know from my experience that there are lots of difficult decisions for ministers to take – this is an easy one.’

Rashford, who has raised £20 million to boost food distribution with the charity FareShare, has admitted to using food banks and receiving free meals as a child.

He said he wants to help the families that need it the most, knowing how it felt to go hungry.

Paul Whiteman, general secretary of school leaders’ union NAHT, added: ‘Holiday hunger has always been a great concern for school leaders and this summer is likely to be especially challenging for many low-income families given the impact of lockdown on finances.

‘We agree with Marcus Rashford that the Government must not let children go hungry over the summer and should provide funding to extend free school meals.’ 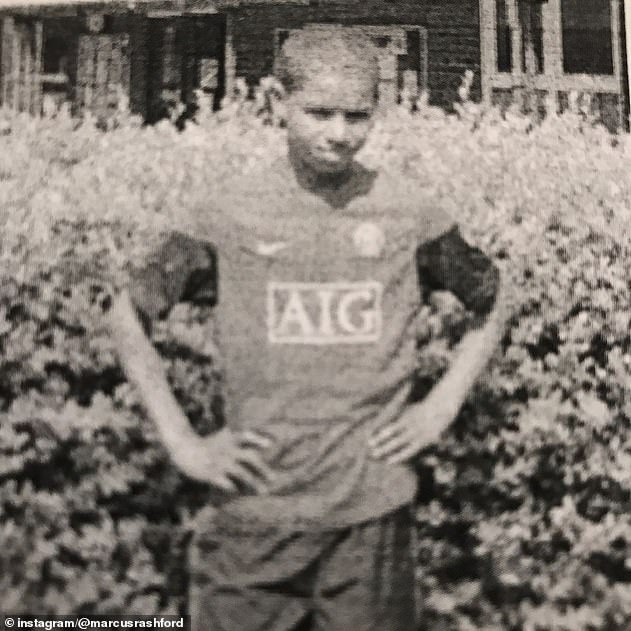 Rashford benefited from the free school meals system while growing up, dreaming of football. Here he is pictured posing in a Manchester United shirt, the club he has always supported

The Prime Minister’s official spokesman said: ‘The Prime Minister understands the issues facing families across the UK which is why last week the Government announced an additional £63 million for local authorities to benefit families who are struggling to afford food and other basic essentials.

‘The PM also set out that as schools open more widely and their kitchens reopen, we expect them to make food parcels available for collection or delivery for any children that are eligible for free school meals who are not yet able to return to schools.

‘Where that is not possible, schools can continue to offer vouchers to eligible pupils.’

A Department for Education spokesperson said: ‘Free schools meals are ordinarily term time only, and the national voucher scheme will not run during the summer holidays.’

‘Thousands of children will also receive additional support through our Holiday Activities and Food programme, which offers activities and free meals throughout the summer holidays,’ they added.

Market Wrap: Traders Buy the Dip and Bitcoin Holds at $9,200

Arsenal stars Mesut Ozil and Sead Kolasinac are all smiles after...