People are now measuring time by their phone BATTERY: Handheld technology has warped perceptions so much that ‘commuters think they’re 20% away from home’, study claims

Smartphones have warped our sense of time and space and led us to think of time in terms of how much charge we have left, a study has claimed.

People involved in a study said their personalities were in part defined by how well-charged they kept their phone, and the percentage could affect their mood.

Researchers interviewed a small number of Londoners who have long daily commutes about the role that energy usage has in their daily life.

Those who keep up a high level of charge were seen as ‘planners’ or ‘control freaks’, whereas people who let their phones die are ‘inconsiderate’ and ‘disorganised’.

Marketing researchers Thomas Robinson of City, University of London and Eric Arnould of Finland’s Aalto University interviewed 22 Londoners aged between 23 and 57 who spend between 60 and 180 minutes commuting daily.

The researchers found that the participants viewed their travel time through the lens of how far away they were from being able to recharge their phone.

‘People no longer think about their destination being 10 km away or 10 stops on the tube. They think about it being 50 per cent of their battery away,’ said Dr Robinson.

‘During interviews respondents discussed how a full battery gauge made them feel positive and as though they could go anywhere or do anything,’ he added.

‘Anything less than half full, however, induced feelings of profound anxiety and discomfort.’

One of the participants described how they felt watching their device’s battery icon as the day progressed.

By the time the phone had discharged 50 per cent of its battery power, they said they would think ‘Oh God, I had better stop it from updating itself all the time in the background.’

The reported effect of reaching 30 per cent charge was profound.

‘Now I’m not having fun anymore,’ the interviewee said of the situation. 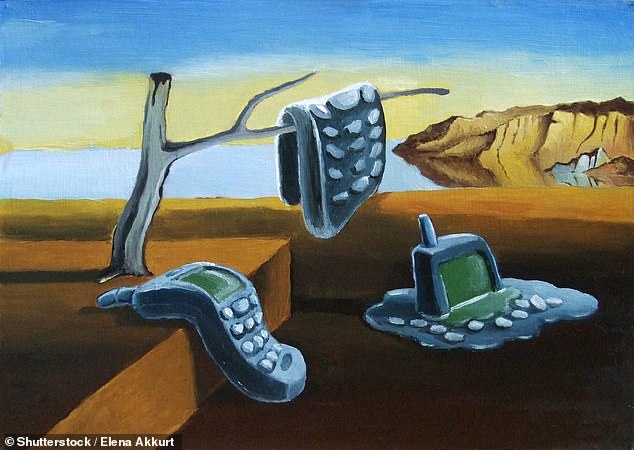 Mobile phones have warped our sense of time and space, making us redefine times and distances in terms of remaining battery life and the nearness of charging points

Battery icons have become core to social and consumer tasks, they suggest, as devices have increasingly become more than just a phone and encompassed such roles as maps, wallets, diaries, entertainment systems and more.

The researchers argue that our growing reliance on our devices has resulted in people identifying themselves and other people in relation to how they maintain the level of their phone batteries.

In contrast, participant said that people who allow their phone batteries to run out of charge were ‘inconsiderate’, ‘disorganised’ and ‘frightfully frustrating’.

‘We found that people who let their phones batteries run out are viewed by others as out of touch with the social norm of being connected and therefore unable to be competent members of society,’ Dr Robinson said.

The researchers also found that managing their device battery levels had an impact over how people structured their day — such as arguing over who can charge their device on the nightstand while sleeping and visiting locations with charging points.

The full findings of the study were published in the journal Marketing Theory.

HOW SEVERE IS SMARTPHONE ADDICTION?

With the average age for a child to get their first phone now just 10, young people are becoming more and more reliant on their smartphones.

Worrying research from Korea University suggests that this dependence on the technology could even be affecting some teens’ brains.

The findings reveals that teenagers who are addicted to their smartphones are more likely to suffer from mental disorders, including depression and anxiety.

Other studies have shown people are so dependent on their smartphone that they happily break social etiquette to use them.

Researchers from mobile connectivity firm iPass surveyed more than 1,700 people in the US and Europe about their connectivity habits, preferences and expectations.

The survey revealed some of the most inappropriate situations in which people have felt the need to check their phone – during sex (seven per cent), on the toilet (72 per cent) and even during a funeral (11 per cent).

Nearly two thirds of people said they felt anxious when not connected to the Wi-Fi, with many saying they’d give up a range of items and activities in exchange for a connection.

Bitcoin Price Consolidating But What Happens if $9K Support Is Lost?