A pensioner has died of skin cancer after claiming doctors sent him home with paracetamol for a cancerous lump on his head.

George Hobbs, from Gillingham in Kent, had been suffering in pain while awaiting surgery for the orange-sized tumour on his head.

It had started growing last August when the 89-year-old had a fall and was left with a wound on his head.

The retired civil servant claimed that his GP sent him home with painkillers three times before finally referring him to specialists.

Mr Hobbs said he was ‘furious’ it had taken until May this year to diagnose the black horn-like growth as skin cancer.

He died on July 25 and his grieving daughter Clare Hobbs, 32, now wants to know why it took so long for her father to be taken seriously.

George Hobbs, 89, of Gillingham, Kent, has died after claiming doctors initially sent him home with paracetamol for a cancerous lump on his head. He is pictured in May

Ms Hobbs said: ‘There have been failures on a lot of people’s parts.

‘Towards the end he’d spend a lot of time lying down as that’s when it was at its least painful.

‘He hardly went out because he was embarrassed.

‘He filed all his documents and when I went through them after his death I found a note which read “please help me it’s so painful”. That was heartbreaking.

‘I just want someone to take responsibility. He was miserable and he did not deserve that.’

Speaking a week before his death, Mr Hobbs said he was having to sleep on a folded towel as the mass was bleeding.

The grandfather-of-three slipped in his daughter’s bathroom last August on the day of his wife’s funeral.

He cut his head open, and after patching him up, doctors sent him home.

The wound gradually grew in size, and when he eventually went to the doctor in February, it was the size of an egg. 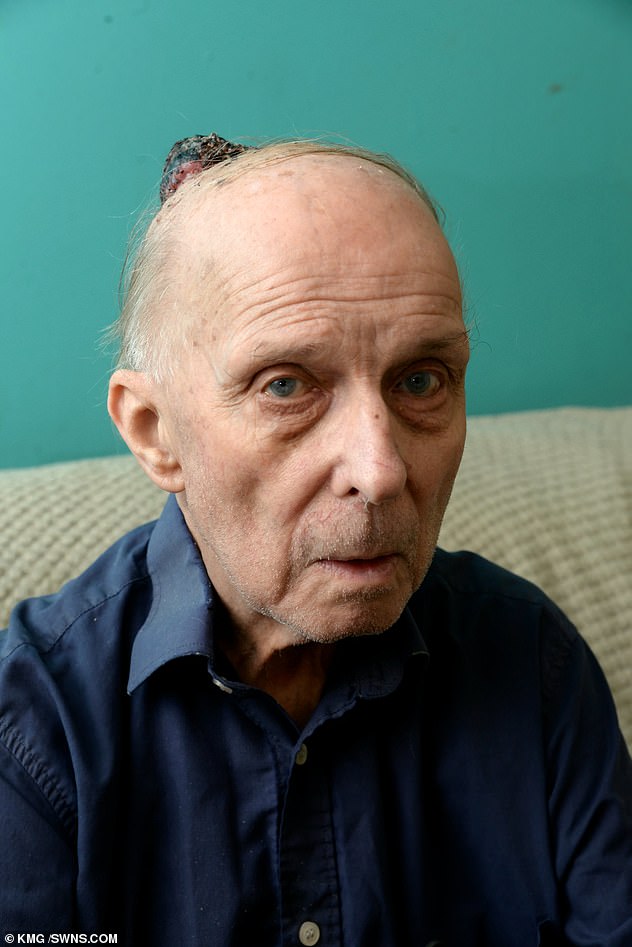 Mr Hobbs had been suffering in pain while awaiting surgery for the orange-sized tumour on his head. His daughter, Clare Hobbs, wants to know why it took so long for medics to help him 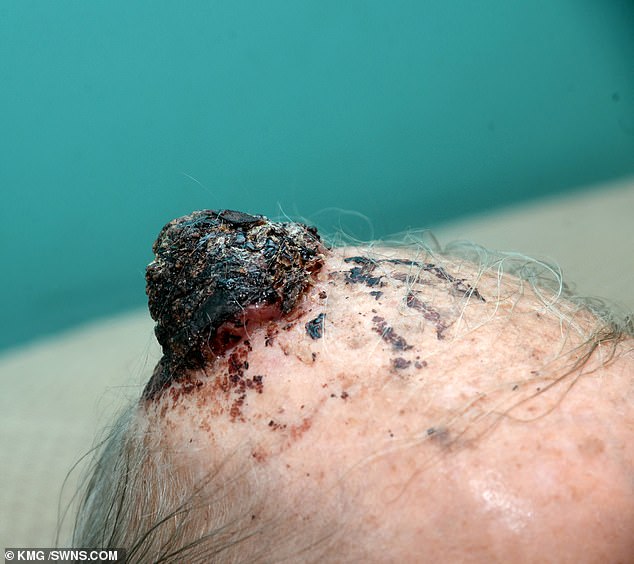 Mr Hobbs said a specialist was shocked at the delay in his referral. Pictured, the growth that developed over nine months, pictured in May

The doctor at The Railside Surgery told Mr Hobbs to take painkillers, and so he tried to deal with it as best he could.

CAN A WOUND LEAD TO SKIN CANCER?

Squamous cell carcinomas can develop in skin damaged by other forms of radiation, in burns and persistent chronic ulcers and wounds and in old scars.

It can develop if skin cells are damaged in a way which affects their DNA.

If the DNA is damaged in a way that affects cells’ ability to reproduce properly this could cause the uncontrolled division which can lead to cancer.

SCCs is a type of cancer that appears as a scaly or crusty raised area of skin with a red, inflamed base. They can be sore or tender and they can bleed but this is not always the case.

People who have a weakened immune system have a higher risk of developing skin cancer.

But the lump kept getting larger and more painful.

He claimed he was told to take paracetamol twice more until a new doctor sent him to see dermatology experts at the Community Living Health Centre in Gillingham, who referred him to Queen Victoria Hospital in East Grinstead.

The hospital arranged for Mr Hobbs to see a specialist during a weekly visit to Medway Maritime Hospital in May.

Mr Hobbs said he was later told by a specialist that he urgently needed to go under the knife.

Squamous cell carcinoma – a common form of skin cancer – can develop from skin damaged by swelling, infection or wounds, according to experts.

In May, Mr Hobbs said: ‘I’m furious that they didn’t take this seriously to start with. It’s really causing me a lot of discomfort.

‘The specialist at Medway told me I should never have been told to take paracetamol for it.

‘They were amazed it had been allowed to get this bad and said I should have been sent to them immediately.’

Mr Hobbs, who had also been recovering from bladder cancer, was worried about going under the knife again.

He said: ‘They’re worried because it’s not clear how deep it goes.

‘I really am very apprehensive and haven’t been able to sleep very well.’

After a number of rearranged appointments, an operation was eventually scheduled for July 5.

But after being sick on the journey to East Grinstead’s Queen Victoria Hospital, which provides specialist skin cancer care, he was sent home.

The Railway Surgery, Mr Hobbs’ local GP surgery, is part of Medway Clinical Commissioning Group alongside 54 other GP practices from across the Medway Towns.

A complaint Mr Hobbs made to Medway Clinical Commissioning Group and NHS England is still being investigated.

Director of primary care transformation Tracy Rouse said: ‘We are very sorry to hear of Mr Hobbs’ death and would like to offer our condolences to his family and friends.

‘Complaints about primary care, which includes GP surgeries, are handled by NHS England and we understand they received a complaint from Mr Hobbs.’

Nearly one in 50 US teen students see selves as…